Thanks to recent rulings by the Ohio Liquor Control Commission, any restaurant with a liquor permit can sell alcoholic drinks to carry-out or delivery customers as part of any food order. Both hard and soft booze is permissible as long as the order is limited to two drinks, each not exceeding two ounces of hard spirits.

While we’d never knock any mixed drink delivered straight to our door, we do appreciate a recent proliferation of reusable glass containers in place of all that plastic. Some operators are even offering customers a discount on future refills, assuming that sanitation measures can be guaranteed.

One such place is Alea in Ohio City, which is selling cocktails such as Blood and Sand, Old Fashioned, Boulevardier and Manahttans by the Mason jar. Carbonated cocktails like the French 75 and Gin and Tonic are offered in 6-ounce glass bottles. Bring your reusable vessel back for another round and you’ll enjoy a buck off each bevvie.

Jacob Orosz at the Fairmount in Cleveland Heights is whipping up some classic and creative cocktails and transferring them into 4-, 8- and 16-ounce Mason jars. Those include Martinis, Manhattans, Moscow Mules and "Joe Exotic" Sangrias. This weekend he'll introduce the Fauci Fizz. Orosz will also take a buck off each drink on a return visit and sanitize the jars for reuse.

The Pompadour out in Fairport Harbor is offering a limited but rotating selection of cocktails like the Winter Mule, Bourbon Smash and Figgy Piggy in 10-ounce Mason jars. Likely beginning next week, customers who come back for more will walk away with a discount along with their drinks.

“At first we weren’t doing refills because we thought it might be a sanitary issue, so we just had people keep the jars and they get a recipe card with each cocktail,” says bar manager Kevin Patrick. “Moving forward I’m going to talk with owners about a refill discount.” 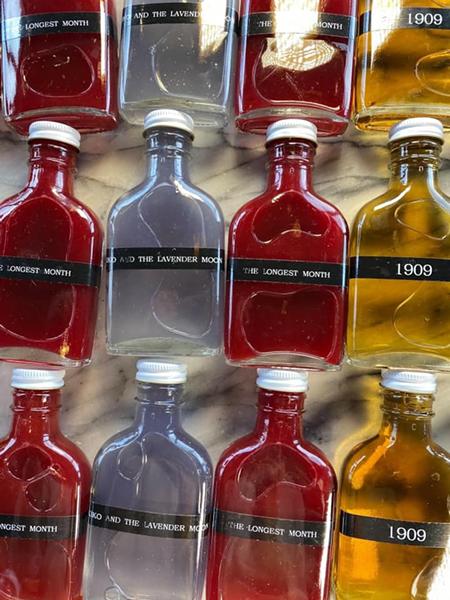 Felice Urban Café in Cleveland is selling top-notch cocktails like the boozy 1909, Longest Month and Kiko and the Lavebder Moon in 100-ml glass flasks that are so adorable, they’ll likely will never leave your possession.

Out in Moreland Hills, Flour is selling drinks like the Pear Mule, Pomegranate Negroni and Italian Margarita in recyclable – if not refillable – glass containers.

Square Bistro in Chardon is selling popular beverages like the Square-Hattan, Traditional Margarita and Cosmopolitan in either 4- or 8-ounce Mason jars (depending on the cocktail) with the simple instruction to “pour over ice and enjoy.”