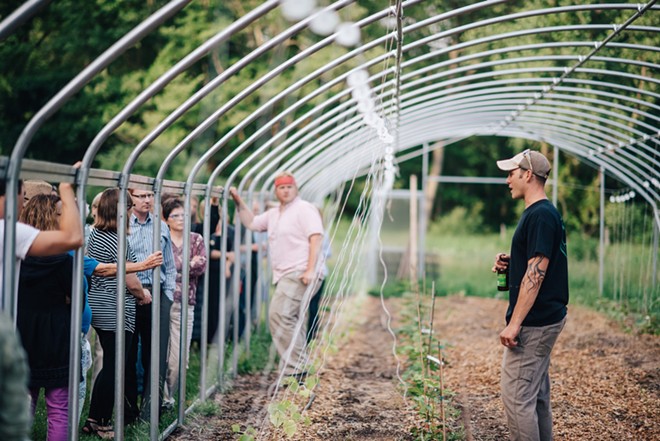 What’s next for Cleveland restaurants?

Don’t ask Ben Bebenroth of Spice, who answers that question with the confession: “I’m lost, and I’m okay with being lost for now.”

Five weeks ago, Bebenroth made the decision to permanently shutter Spice Kitchen, his widely acclaimed farm-to-table bistro in Detroit Shoreway and the face of a thriving culinary venture that includes Spice Catering. As one of the first local operators to publicly pull the plug, the chef admits to having no idea what the future holds for the restaurant world at large, but he was certain that reactionary measures like operating as a take-out and delivery-only restaurant – or pivoting to become a local-foods market or CSA pick-up point – were not going to be the solution for him and his team.

“If we weren’t making money as a full-service, high-end dining restaurant with wine, how are we going to make money selling lettuce,” the chef asks rhetorically. “And you’re never going to convince me that to-go will work.”

Instead, Bebenroth made the “thoughtful” decision to close the restaurant, lay off every staffer save for his core team, study the business environment and keep all options open. What the chef did not want to do was act too quickly and later regret those decisions down the road.

“We were trying to navigate in the middle of a dust storm,” he explains. “And if we pick a direction right now, we could end up somewhere we do not want to be because we can’t see clearly.”

Bebenroth and his team are not dealing solely with the closure of Spice, but also devastating hits to Spice Catering, the high-end outdoor events company. Over the span of just four days, the chef reports, nearly $350,000 worth of bookings were erased from the books. Despite being firmly in the midst of the “busy season” for events, Spice does not have a major booking until June 21.

“I don’t want to say that upscale outdoor culinary experiences are a thing of the past – they’re not,” says Bebenroth. “But they are not a thing of the present or the near future.”

As states and the country gear up for the big reopening, Bebenroth is less than bullish on the bounce-back. Restaurants operate on the thinnest of margins, as we all know, and that is at the very best of times. Toss in half-empty dining rooms, temperature checks and mask-wearing servers and, well, the numbers begin to look bleak.

“Keeping tables apart, socially distant service… that’s not a reality,” he says. “If you can’t make money turning every table twice and a half, how are you going to do it at half that. And now you strap on an amortization schedule for whatever loans you qualified for.”

The Coronavirus is decimating an industry that employs 11 million people nationwide, with a reported one-third of restaurants estimated to never reopen. But as is the case with most upheavals and transformations, some good likely will be waiting for us on the other end.

“What we have seen through this collapse of everything is a return to quality of life, to family, to cooking at home – a reduction of pace and expectations,” Bebenroth observes. “Upscale food and the finer points of service and all that stuff is optional. None of that is essential anymore.”

One month, two months, six months… Bebenroth is like the rest of us in guessing at when normalcy might return. All he knows right now is that Spice, the restaurant, is dead.

“I don’t know what we are going to do with 5800 Detroit, but we don’t even call the building Spice anymore,” he says. “That is both liberating and kind of hollowing. What we used to do is dead and we have to accept that first before we can decide what we’re going to do next.”