The Only (Yes, Only) Theater Showing First-Run Movies in America Right Now is a Florida Drive-In 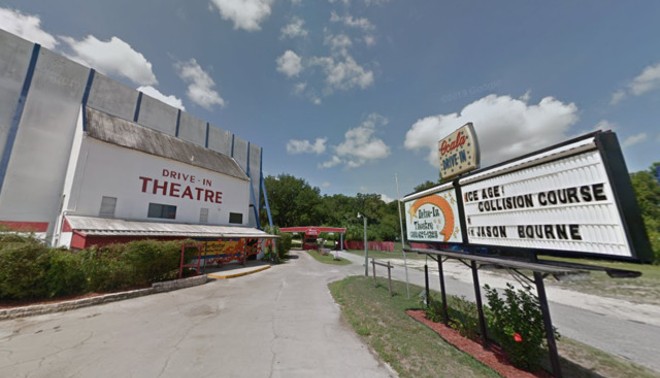 There’s only one theater in America showing first-run movies right now, and to get there you’re gonna have to drive your car to Ocala, Florida then park it at the local drive-in located at 4850 S. Pine Ave.

Writer Ernie Smith took to Twitter on April 15 to say that, “We live in a world where the top-grossing movie at the box office last weekend made $1,710—and it was an improvement from the prior weekend,” but his thread eventually landed at the fact that “The Ocala Drive-In in Ocala, Florida is the only theater in the country screening first-run movies right now.”

So a theater that is a drive-in but cool enough to run an IFC flick on its opening weekend?


In comments to Vice, Ocala Drive-In owner John Watzke told the publication that, “I've had hurricanes come, I've stayed open until the power went off and I had no one in the parking lot… Anybody that knows me and knows the drive-in knows I don't close.”

Watzke, 63, says his impetus to stay open has to do with providing wages for employees and giving people a way to escape reality. He told Vice that he was in Mississippi during Hurricane Katrina and that, “Anything that gave you a sense of feeling normal for just an hour or so meant a lot.”

His theater—which originally opened in 1948 before being closed in 2002 and then reopened—provides just that.

And don’t think he’s doing it for the money either. Watzke, who comes from a long line of cinema men, said opening the joint was a bucket list item and passion project.

"That's the thing about drive-in theaters. You don't make a lot of money. You can make a good living if you work it right, but you've got to have a passion for it,” he said.

Read the rest of this great profile via Vice.