Armond Budish Made Planting Trees a Centerpiece of 2019 State of the County Address. What Happened? 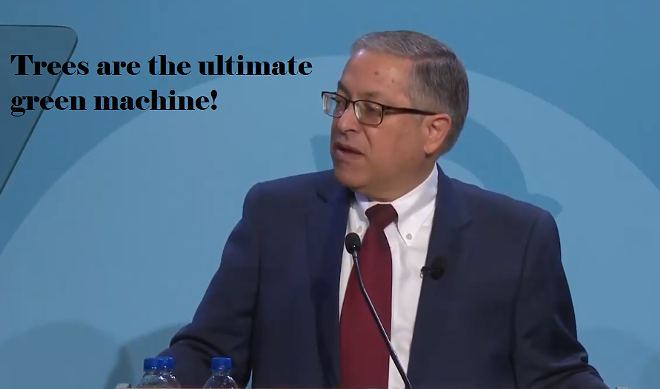 Cuyahoga County Executive Armond Budish devoted at least a third of his 2019 State of the County address to unveiling a countywide climate action plan. He outlined seven specific areas that he said would make Northeast Ohio a "trailblazer" in climate change policy.

"I want to be able to look [my children and grandchild] in their eyes and say that we protected the world that they'll inherit," Budish said, reminding the local audience that the region would continue to be pummeled by "the four Ws": Warmer, Wetter, Wilder Weather.

One common interpretation of Budish's remarks at the time held that he was side-stepping the most pressing issues facing his administration—a county jail scandal and a sweeping corruption probe—and was trying to distract everyone by talking about, for example, trees.

But the climate action plan, as Scene wrote, merited serious attention and praise.

One year later, on the eve of Arbor Day, the county's investment in tree planting has produced far less than was hoped for, at least from Budish's perspective. Though it was the top-line policy in his climate action plan, only 447 trees have been planted as a result of county grant funding in 2019 and 2020. But the number of trees planted only tells part of the story.

Four hundred-odd trees sounds like very small potatoes in light of the rapid loss of tree cover in the region. From 2011 to 2017, Cuyahoga County saw its canopy reduced by 6,600 acres (6.1 percent), according to a tree canopy assessment update released in December. During that time, an estimated 18,000 trees were lost due to clear-cutting at 16 suburban residential development sites alone.

Budish's tree-planting initiative was meant to countervail against the forces of deforestation, (residential and commercial development, invasive pests and wind damage chief among them). Twenty-six projects proposed by suburban communities and nonprofit organizations were selected as the inaugural awardees in the Healthy Urban Tree Canopy grant program. The reimbursable awards totaled $950,000, almost exactly one-fifth of the $5 million that Budish committed over five years.

As of this week, though, according to the County Soil & Water Conservation District, which is administering the grand funds, only $142,000 of that total has been reimbursed or requested for reimbursement. Much of the planning and implementation work, in other words, has not yet occurred.

It's not the pandemic's fault, either, or at least not totally. (Though for the record, more than 100 trees were scheduled to be planted at Michael Zone recreation center in Detroit-Shoreway this week and had to be delayed.)

Cuyahoga County Director of Sustainability Mike Foley told Scene that the second grant round has been placed "on hold," given the uncertainty of the county budget due to the coronavirus. But the first round of grants was announced months ago.

The first trees planted as part of the program went into the ground in October, 2019, in Bedford, an inner-ring suburb which already exceeds the average canopy in the county. (Bedford received a $40,000 grant for the replacement of residential Ash Trees.)


So what's the hold-up with the other recipients? Why have so few trees been planted?

Foley told Scene that the majority of the 2019 grants were for planning, not planting. And he said he had intended to meet individually with the grantees in May to discuss their progress. The idea, he said, was that communities or organizations who applied for planning grants in the first round would then apply for implementation grants later on. (The limited number of trees planted also may be explained by the timing parameters established in the county RFP. While planning work was expected to be completed within one year, implementation work was given three years.)

"The plan for round two was that a minimum of 75 percent of the funding would go to planting," Foley said.

But the distinction between planning and planting has been lost on just about everyone but "tree nerds," said Sandra Albro, the Director of Community Partnerships at Holden Forests & Gardens and the Co-Chair of the Cleveland Tree Coalition. It's certainly been lost on county leaders.

"When the grant program was announced," she said, "I think [Budish] had it in his mind that it would really be about tree planting and reforestation. But as it was administered by Soil & Water, they brought in the Ohio Department of Natural Resources, who said we really needed to focus on planning, so that when we do implement, the money is spent efficiently."

The clear push, Albro said, was for communities to have workable plans in place before money was disbursed for planting projects. In many cases, that meant inventorying existing tree stock and learning which trees should be planted where to maximize chances of survival and community benefit.

Budish was reportedly distraught that so few trees were being planted as part of the program's opening round and made an appeal to the Cleveland Tree Coalition to propose more substantial reforestation projects in the second round, "to show that the county was really moving the needle."

"But now that round of funding's on hold," Albro said. "And I don't think it's just COVID-19. County council hasn't been a fan of this before, and they definitely aren't now. I think there's just been a disconnect between planning and planting. They think the money could be better spent elsewhere."

Albro has worked with a number of neighborhoods in the City of Cleveland and said that important work has already been completed, even if the planting numbers aren't exactly eye-popping. Slavic Village, for example, has already inventoried all of its street trees and identified those classified as high-risk. With solid information in hand, the City of Cleveland then was able to take down many of them.

Midtown is currently creating a tree plan to beautify traffic corridors and the businesses along them. In Cudell, Albro said, the planning process is focusing on low canopy areas where trees can be added for equity and health benefits.

As a rule, city neighborhoods don't have resources to conduct this kind of work in-house and tend to contract out their tree plans through companies like Bartlett and Davey, Albro said. Once these plans are completed, higher tree planting numbers can be expected in later rounds of funding; that is, if Budish and County Council don't grow impatient.

Albro cautioned, though, that even with detailed tree plans, it's unlikely that thousands of trees can be planted en masse.

"Urban tree planting is just hard," she said. "And I don't think cost is the main issue. If you want to plant 50 trees, you need three-fourths of an acre, and it's not easy finding individual land owners willing to give up that land for tree canopy. It's easier in the suburbs, but 50 trees is a big ask. We're usually working on piecemeal projects that each need their own steward and landowner. It takes a lot of legwork."