Cleveland Business Journal Launches Today With Local Staff of One 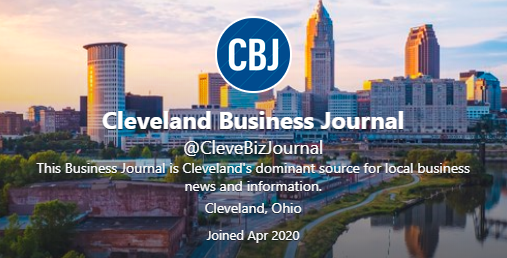 In an introductory column, Jon Wile, VP of Content for American City Business Journals, said that the new publication would focus on economic development news in Northeast Ohio. He said local content would be produced by veteran reporter Mary Vanac, with supplemental material provided by ACBJ's other Ohio publications in Columbus, Cincinnati and Dayton.

The one local job created, at least for the time being, belongs to Vanac. She's an alum of the Akron Beacon-Journal, the Plain Dealer and the Columbus Dispatch and currently teaches in an adjunct capacity at John Carroll University.

"She’s an accomplished journalist who has a deep understanding of the business community in Cleveland and the surrounding area," said Wile, in a separate story announcing Vanac's hiring. "But she’s also an entrepreneur in her own right, which gives her insights that other business journalists miss.”

The other staff named on the site's "about us" page are not local. Editor Ed Stych, who also edits ACBJ's digital products in Los Angeles, New York and Chicago, is based out of ACBJ's headquarters in Charlotte. Ditto Associate Editor Kaleel Weatherly. Two part-time contributors are based in California and write for a number of ACBJ publications, per their LinkedIn profiles.

Neither Stych nor Wile has yet responded to Scene's emailed questions from earlier this afternoon, and Wile was unavailable by phone. So it's unclear if the local business journal intends to open a physical office in Cleveland and hire a local sales staff. (We wondered whether there might be some overlap with the sales and marketing personnel at cleveland.com, also an Advance property.)

All we know for now is that CBJ wants to focus its reporting on subjects relating to economic development.

"Comprising equal parts real estate, technology and startups, and the intersection of business and government, eco devo encompasses the most important and wide-reaching segments of the business community," Wile wrote in his column.

Unmentioned in his column, though, is that these topics are already among the most assiduously covered in town. Not only does Cleveland have an existing publication devoted to business issues — Crain's — but the Advance Ohio unified newsroom under Chris Quinn devotes itself routinely to the preoccupations of the business community. Its editorial judgement is almost always reflective of downtown business interests, at any rate.

It's reasonable to assume that the Cleveland Business Journal hopes to leech advertisers away from what will be be its primary competitor, Crain's. If that's the case, Crain's made a smart preemptive move by hiring Plain Dealer real estate reporter Michelle Jarboe before CBJ got a chance. Jarboe was among the recent Plain Dealer layoffs and has been brought on in an enterprise capacity. She started literally today. Longtime reporter Stan Bullard is already on the real estate beat at Crain's. Ken Prendergast, blogging at NEOtrans, is also out there hunting for scoops on the real estate and development beats, so Vanac will have her work cut out for her if CBJ wants to compete for advertising dollars and eyeballs.