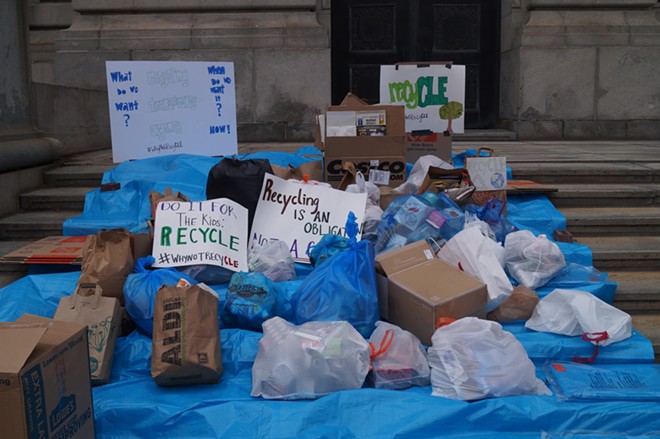 In the wake of revelations late last month that the City of Cleveland's recycling contract had expired and the city was sending all recyclable material to a landfill, City Council met last week to get answers from the administration and berate officials for their lack of communication. Among the big disclosures by Cleveland COO Darnell Brown was that tickets for improper waste disposal were no longer being issued.

Brown and Sustainability Chief Jason Wood fielded questions and endured tongue-lashings from council members, virtually all of whom wanted to personally remind the administration that its behavior was unacceptable.

"It would have been helpful for us to have this information before we were blindsided," said Ward 5 Councilwoman Phyllis Cleveland, in a representative comment. "[Proactive communication] could have done a lot to blunt the impact and make this less of a story."

Brown assured council throughout the meeting that the City of Cleveland was still committed to its recycling program, but that the program must meet the city's financial needs. "It has to be a program that works," he said. "The cost has to be competitive for the environmental benefit we get from doing the right thing."

He reiterated in an introductory presentation what the city had already tried to publicize: It had received only one bid when it sought proposals on two occasions earlier in 2020, before its existing contract expired on April 1.

The bid it received, from southwest Ohio, would have cost Cleveland $192 per ton of recyclable material collected. That represented an increase of $6 million to maintain the status quo, Brown said.

Ward 17 councilman Charles Slife asserted himself as the voice for sustainability during the discussion.

"When I recycle my pop can, I'm not doing it for the financial benefit of the city of Cleveland," he said. "I'm doing it because it's the right thing to do. We need to come up with a program that weathers the ebbs and flows of the market."

Brown agreed and said that he hoped an outside consultant — identified as GT Environmental — would provide recommendations in its forthcoming holistic analysis of the city's waste collection program. No date for the consultant's work has been set, due to the pandemic.

Two of the most popular themes in council comments, beyond the repeated urging for better communication, were a request for clarity on fines and the monthly waste collection fee, and confusion over the persistence of separate trucks collecting garbage and recycling, even though the program has been suspended.

To the first point, Brown assured council that the city was no longer issuing waste collection fines and that virtually all of the tickets that had been issued in the past had to do with improper waste disposal, not recycling.

"You would have had to do something really egregious to get a recycling ticket," Brown said. (The majority of citations, he added, were for "large set-outs," like evictions, in which items were deposited on tree lawns, outside the city issued bins and/or on the wrong day.)

Councilman Matt Zone reminded the administration that when the curbside waste collection program began, the monthly fee had been predicated on a "robust" recycling program. It was never advertised as a basic waste collection fee.

"And now all of a sudden, without understanding the market forces, people are saying, 'I pay taxes, and waste collection should be part of my taxes,'" he said. "When you take away the recycling, there's a bitter taste left in people's mouths."

Councilmen Brian Kazy, Anthony Hairston and Tony Brancatelli all asked why recycling trucks were still collecting material from the blue bins, even though the program had been suspended. Wouldn't it be more cost-effective, they asked, to have single trucks collecting material?

"Residents are concerned and confused," said Ward 10's Hairston, "and having two trucks is just fuel added to the fire."

Brown said that though the recycling program was currently suspended, the amount of household waste had not changed and wasn't likely to change. So the same number of trucks, and the "same amount of effort," were required to collect the material. He said the consultant would consider that situation, though, including the possibility of new waste collection routes.

But Brown stressed that the city's perspective was that people should attempt to maintain their recycling habits (assuming they were good). The market for recyclable items will change, he said, and when a new, perhaps modified, program is instituted in Cleveland, it would be hard for residents to re-learn good habits they'd abandoned.

Both Councilmen Slife and Kerry McCormack pointed out that the city should be communicating broader sustainability themes as well, in particular that reducing should be made even more important than recycling.

Brown agreed that some radical lifestyle changes may be on the horizon. "I'm not sure we can recycle our way out of our waste problem," he said.