TownHall Sues Scene Over Report on GM's Bigoted Statement to Former Employee: "Go Back to the Country You Came From”

Today, Cleveland Scene was served with a lawsuit filed by Townhall and its General Manager Ryan Hartzell, who have sued over Sunday evening's report — "Addressing Patio Concerns, Lago Ruminates on Nature of Art, TownHall GM Says 'Go Back to the Country You Came From."

The report followed concerns of the restaurant's overcrowded patio over the weekend, which drew a violation notice from the city of Cleveland's Department of Public Health, and Hartzell's Facebook comment to someone concerned about adherence to safety protocols, "If you hate this country so much go back to the one you came from."

The lawsuit, filed in the Cuyahoga County Court of Common Pleas, alleges that Scene’s reports constitute defamation – the publication of knowingly false statements – in connection with the patio story as well as other unspecified reports in recent years.

Screengrabs that circulated on social media initially showed that Hartzell's comment was in reply to a black woman, which is what the headline originally stated. 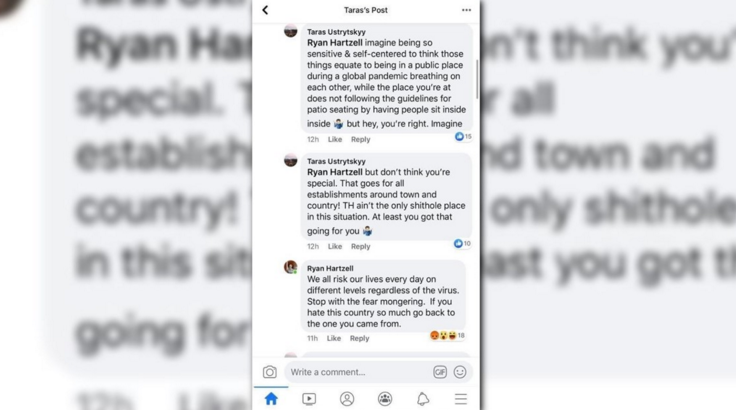 Within approximately an hour, the story was updated to reflect that the comment was made to a man of Ukrainian descent.

Regardless of the target, the comment was widely viewed as reflecting prejudice on the basis of national origin, as was acknowledged by TownHall’s owner Bobby George in a post that has since been deleted from the restaurant’s Instagram page. That deleted post acknowledged that, "Ryan's comments were insensitive and inappropriate. They do not represent the opinion of TownHall or any of our businesses."

The statement then went on to name the Ukrainian man, a former TownHall employee, and laid out the reasons that George believed his GM’s bigoted statements were justified.

At the end of the statement, George said Hartzell's comments led him to conduct an internal investigation to determine if the longtime TownHall employee had made any racist comments in the past. After talking to staff, he claimed, he found no such examples, but determined that, "Ryan needs to learn from this situation. As such, he will be given a protocol of books to read and be required to undergo a sensitivity training course." 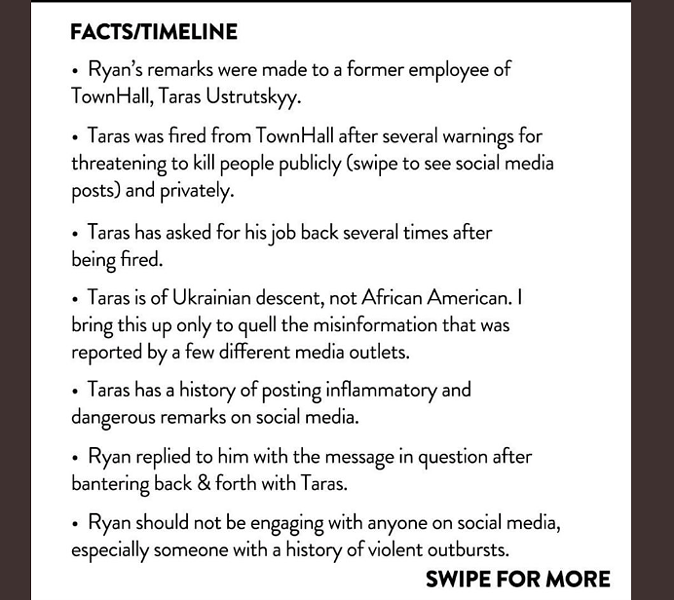 After photos were circulated on social media of TownHall's patio over the weekend, which opened under state guidelines issued to prevent the spread of the coronavirus, the restaurant was cited in a warning letter by City of Cleveland officials who visited the location and found staff were not wearing masks, the restaurant was not enforcing proper distancing, and temperature checks had not been completed on employees prior to opening.

Scene has previously reported on TownHall and Bobby George, including within the 24 hours prior to the lawsuit being filed, during which it has conducted several interviews with former employees, variously pertaining to the restaurant's operation, George’s management tactics, and racist and bigoted comments uttered by George to employees.

Scene has retained attorney Peter Pattakos to represent it in this lawsuit, who has issued the following statement:

“TownHall has advanced an incredible legal theory—that it should be entitled to damages for defamation and intentional infliction of emotional distress because its manager made a bigoted comment about a Ukrainian immigrant, and not a black woman as Scene had mistakenly but reasonably believed for about an hour before it revised its column. This is a classic example of an abusive lawsuit by a wealthy business owner intended to silence negative reporting about his business. With the journalism industry as challenged as it is today, especially in Cleveland, the good news here might be that Scene is more likely to recover on counterclaims against TownHall than TownHall is to recover a penny against Scene. We expect that Ohio courts will not look kindly on Mr. George’s stunt here, and look forward to vindicating Scene’s work and the First Amendment in this lawsuit.”

Scene is similarly confident of its position in this lawsuit, and will continue to report fearlessly on this and other matters on its beat.

View the lawsuit below. (Mobile users might have to switch to desktop view.)