On the Eve of George Floyd Protests, Justice Center Rally Calls for Release of Ohio Prisoners

Billed as a protest to demand the compassionate release of prisoners during COVID-19, the demonstration, organized by the Coalition to Stop the Inhumanity at the Cuyahoga County Jail and the Ohio Organizing Collaborative, became in many respects a prelude to Saturday's (presumably larger) demonstration over the murder of George Floyd by Minneapolis police.

Protests are raging nationwide. People are demanding accountability (once again) for the slaughter of Black Americans, in many cases at the hands of police officers. In February of this year, 25-year-old Ahmaud Arbery was shot and killed by white residents who'd hunted him down while he was jogging in his South Georgia neighborhood. And in March, 26-year-old Breonna Taylor was gunned down in her own apartment by Louisville police, who'd forcibly entered on a so-called "no-knock warrant."

Organizers of Friday's demonstration in Cleveland referenced the Floyd protests scheduled for Saturday afternoon and said it would be impossible to get justice in the streets without justice in the courts. Speakers called on Gov. Mike DeWine to release many more prisoners and Cuyahoga County justices to grant judicial release hearings via teleconference to reduce the population of Ohio's overcrowded prisons.

Speaker Dave Okpara, who spent a year of his life in the Cuyahoga County jail and served additional time at Marion Correctional Institution for drug trafficking, said he now had a successful career as a truck driver. He said if incarcerated individuals were given opportunities to succeed, they would.

Speaker Jacqueline Kovach, who spent time in the Cuyahoga County jail for drug-related charges, decried the inhumanity of locking up drug addicts when what they urgently require is treatment. (The nine deaths at the jail in late 2018 and early 2019, five by suicide, composed the unspoken backdrop of her remarks.)

Multiple speakers stressed the impossibility of maintaining social distance at prisons and said that the only way to keep incarcerated people safe was to release them in large numbers. #FreethemAll216 and #CompassionoverCages were two of the prominent hashtags Friday.

The convoy of cars repeatedly circled and honked throughout the proceedings, and speakers returned to the microphone more than once to make additional comments. Multiple attendees trickled in late, and as the energy grew, despite the wind and rain, there seemed to be broad recognition of a pent-up desire to express anger at the injustices the coronavirus pandemic has exposed.

Two speakers urged those who planned to demonstrate Saturday to do so peacefully, echoing Gov. DeWine, who made a similar appeal at his press conference Friday. The Jail coalition speakers drew a sharp distinction between destruction, which might be counterproductive, and disruption, which is necessary to capture public attention. 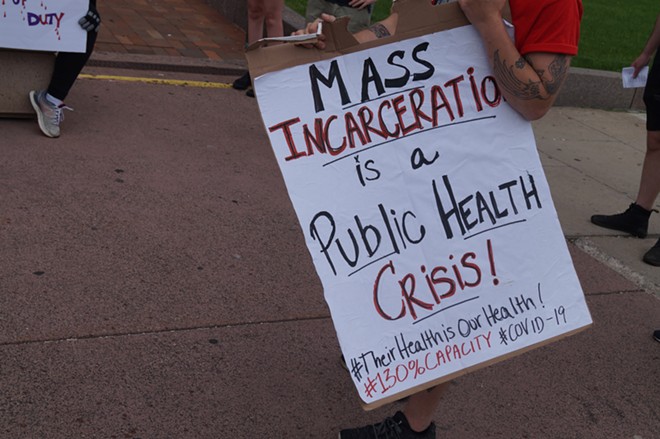