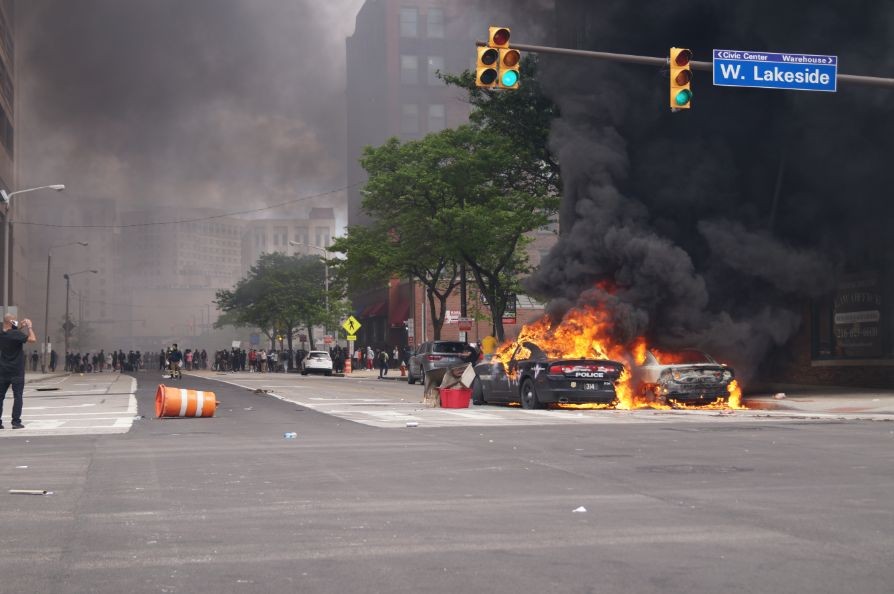 In an early Sunday morning Facebook Live session, Cleveland Mayor Frank Jackson announced that the downtown Cleveland curfew set to begin tonight at 8 p.m. would instead begin at noon and last until 8 a.m. Monday morning.

Cleveland police currently have the Detroit-Superior and Lorain-Carnegie bridges blocked and are checking IDs to allow people through. Lift bridges on other connectors to downtown are raised.

Saturday's George Floyd protest (see our gallery of photos here) gathered thousands in downtown Cleveland in an assembly that began peaceful and then turned chaotic after Cleveland police launched tear gas and rubber bullets at crowds around the Justice Center.

As law enforcement attempted to dispel the crowds, and as the city restricted traffic into downtown, a small group of protestors smashed windows on Euclid Ave. from Public Square to Playhouse Square. Geiger's was looted, and there were reports of liquor being carried away from bars dotting the street.

Cleveland police chief Calvin Williams, who joined Jackson on the video, claimed most of the offenders who damaged property were not from the area. That sentiment echoes those from officials in other cities, including Minneapolis, though with few arrests in Cleveland, Williams' claim is merely an assumption at this point.

“There was a large group of folks who were intent on not being peaceful and that caused all of our problems,” Chief Williams said. “We’re going to have folks deployed all over downtown and all over the City to make sure things like today don’t happen again. We know that a lot of things that happened today were [done by] people who do not live in the City of Cleveland or in this area. There’s tons of video footage of a lot of things that happened and we have investigators as we speak who are going through that footage to identify folks so we can bring them to justice…We’re going to do everything possible to keep this City safe.”

“As you know, the demonstration today started off peacefully,” said Mayor Frank G. Jackson. “It then escalated into activities that were not only unlawful and disruptive but really didn’t represent the spirit of what people were intending to do.”

Volunteers and city workers will use the curfew time to clean up Euclid Ave. and board up broken windows.

While it's unsettling to see downtown vandalized, and while many may feel that those who threw bricks through windows don't represent the brand of protest they'd prefer to see, and while local businesses will now face the work of installing new windows and reopening, let us not forget some perspective here.

This was not just about George Floyd.

And it will not take generations to overcome some property damage.

I am absolutely amazed by how quickly the cleanup is going. Between business owners, @DowntownCLE, @dtCLEresidents, and @CityofCleveland, everyone is pitching in. pic.twitter.com/0DrMkYCCOU

As Pour Cleveland, whose windows were busted yesterday, said in an Instagram comment: "It's just stuff guys. Not our place to judge to how people respond when their voices continue to fall on deaf ears and justice is not served."