Contrary to Police Chief's Claim of Outside Agitators, Two-Thirds of Arrested Protestors Live in Cleveland

After a Saturday protest that ended with tear gas, broken windows and cop cars in flames, Cleveland Police Chief Calvin Williams told reporters during an early Sunday morning Facebook Live briefing, “We know that a lot of the things that happened today were not by people who reside in Cleveland or live in the area.”

But of the 62 people who were booked into the Cuyahoga County Jail for arrests during the protests — on charges like “aggravated rioting,” breaking and entering, and resisting arrest — more than half had Cleveland addresses.  Two were from as far away as Columbus.

Through LexisNexis, we found public records including evictions, arrests, traffic tickets, mortgages and voter registrations for 54 of the 62 people arrested showing that their ties to Northeast Ohio go back years, sometimes decades. We couldn't find records for four people. Two appeared to have records listing addresses in both Ohio and other states, and one may have been associated with a Washington State address, though his records were sparse. 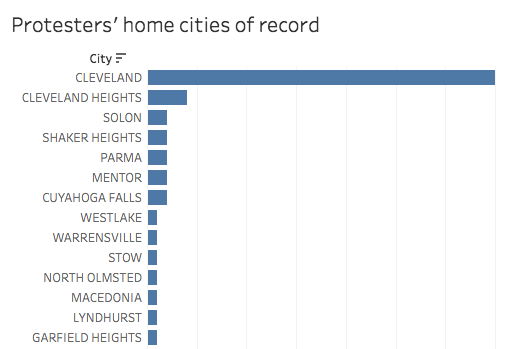 Many of those arrested came from Cleveland-area zip codes with high percentages of black residents and extreme poverty, covering neighborhoods like Cudell, Glenville and St. Clair-Superior.

At least 24 people were arraigned Monday morning on charges likely related to alleged actions during the protest. One of those "outside agitators" evidently came all the way from Ashtabula, according to the Cleveland Municipal Court’s case search system. The 25-year-old, Shy’Questa Pollard, was profiled by a local paper in December as a successful member of a youth employment program. She was arrested for aggravated rioting, a fourth-degree felony, outside the Justice Center.

A handful came from less distant hotbeds of discontent like Avon, Elyria and Westlake. About two-thirds had Cleveland addresses listed.

The list of those arrested, provided by Cuyahoga County spokeswoman, is a curious stew of Northeast Ohioans, including a stained glass artist from Kent; a Cleveland man sentenced to probation in a felonious assault case this spring; a 24-year-old musician in a "melodic Deathcore” band from Solon; a Cleveland Marshall-College of Law student from Oberlin; a Rock 'n’ Roll Hall of Fame employee; a Cleveland man on probation for robbing a gambler last year; a 19-year-old from Westlake; and a man charged with robbing a woman at an Rapid station earlier this year.

The county spokeswoman said she believed the booking list contained all of the arrests from the evening and early morning from the city, county, state and federal law enforcement at the protest.

Since George Floyd’s death in Minneapolis sparked nationwide protests, many city leaders have blamed outsiders for violent confrontations with police and destruction of property. St. Paul mayor Melvin Carter told the press on Friday that most of the protesters arrested were from outside the area, but admitted on Saturday that he was mistaken.

The tactic of blaming people from elsewhere for unrest has been used to discredit protests in other times and places as well. Segregationist George Wallace infamously wrote in a 1964 letter, “[W]e have never had a problem here in the South except in a very few isolated instances and these have been the result of outside agitators.”

Sixty percent of the people booked on Saturday and Sunday were black, and the average age was 31. The youngest people arrested were 18, and the oldest was 52.

Of those that have been arraigned, ten were charged with “aggravated riot” near the Justice Center, where the protest turned from peaceful to chaotic on Saturday afternoon.

Protesters who took to social media and the police disagreed over which party set off the violence, but sometime after 3:30 p.m., police began using tear gas, and by 4:30 p.m. police cars were on fire.

Online data from the city’s dispatch system shows that reports and arrests were concentrated around the Justice Center, and alarms were set off all along Euclid Ave. over the weekend.

- Rachel Dissell contributed to this report

This post has been updated to include further details on the listed addresses of the arrestees.