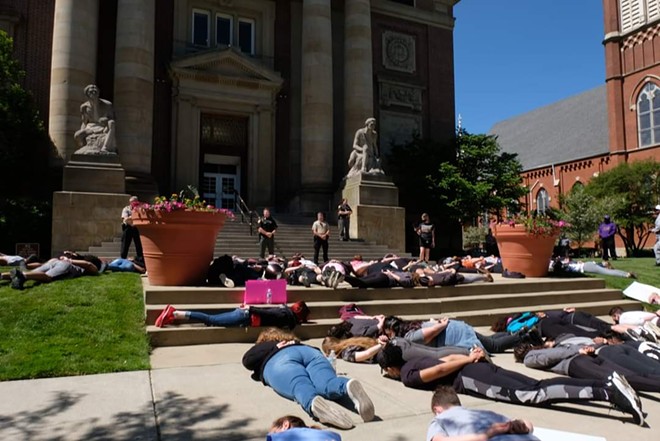 Last Saturday's Justice for George Floyd protest in downtown Cleveland, which remained peaceful early on and turned chaotic after Cleveland police launched tear gas into the crowd and reportedly failed to properly convey an order to dispel, was the largest assembly of its kind in the region, but not the only one.

As the city locked down the Market District and downtown areas under extreme curfew and traffic restrictions to prevent further possible damage, smaller protests went on peacefully around Northeast Ohio from Lorain to Chagrin.

In Strongsville, which was besieged by rumors of invading protesting masses intent on stoking unrest, a handful of peaceful supporters gathered near Route 82 and Pearl Rd. while police staged at Southpark Mall and apparently investigated random tweets.

In Chagrin, a protest planned by Chase Tuller, a Kenston Schools teenager, scheduled for Tuesday but canceled after he received death threats nevertheless went on with 70 people showing up to demand justice for George Floyd.

Tuller — who said he is politically active and involved in the world around him, as well as in his community — picked Chagrin Falls Village due to its history with neighboring Chagrin Falls Park, an enclave located about 20 miles outside of Cleveland, in Geauga County, although it was gerrymandered away from Cuyahoga County. It is a neighborhood of approximately 150 homes in Bainbridge Township and part of Kenston Schools.

Chagrin Falls businesses quickly boarded everything up, fearing mass unrest from what turned out to be a peaceful rally.

Protest organized by students in Chagrin Falls, Ohio. All the businesses boarded up but the rally was very peaceful and meaningful. The police chief was great. pic.twitter.com/vNTxoRxlv3


“Everybody that I saw at the protest [was] really positive and had the dialogue. We wanted to make a statement,” A Cleveland Heights man told Chagrin Valley Today. “You know, since Cleveland shut down, it’s like shutting down the voice of the people. So my friends and I came out to Chagrin’s today because we can’t protest in Cleveland.”

Three dozen or so peacefully demonstrated in East Cleveland on Monday.

In Lorain, about 50 protestors were joined by Lorain police officers as they marched.


Organizer Veronica Filchuk told the Chronicle-Telegram: "This is a diverse community, but there's still some ignorance. This affects all of us. Even if there's just a few of us that gather, we're still getting the message out."

In Painesville, 100-150 protestors gathered for a peaceful demonstration that was supported by the police department of the diverse city, including words from the police chief in a widely shared Facebook post.

Hundreds gathered and demonstrated in Akron over the weekend and last night Lakewood came out as marchers filed down Detroit Ave. after a march earlier in the day led from the First District police station in Cleveland to West Blvd.

Protesters are marching peacefully to Cleveland Heights City Hall. SkyFox has a look from above: pic.twitter.com/ZXxFKe92WG

Cleveland, for what it's worth, will have a nightly 8 p.m. to 6 a.m. curfew in effect for the rest of the week for downtown and parts of Ohio City.