Update: Ondrejech told Fox 8 that the city indicated to him today that when the curfew expires tomorrow morning at 6 a.m. it will not be extended any further. As such, he'll withdraw his legal challenge.

(Original story): A motion seeking a temporary restraining order from a federal judge to prevent the city of Cleveland from enforcing planned evening curfews the rest of the week was filed in federal court Wednesday evening.

Local lawyer Mark Ondrejech, who filed the motion, argued the curfews amount to martial law instituted without any evidence of "clear and present danger."

Following last Saturday's protests in downtown Cleveland demanding justice for George Floyd, Cleveland instituted strict curfews and traffic restrictions that at first stretched until Monday morning. Those restrictions were then extended through a second modification of the proclamation of civil emergency until Wednesday morning with additional 8 p.m. to 6 a.m. restrictions every evening through Friday.

The city argued in a late-night response (see below) that no specific irreparable harm was shown by Ondrejech to merit a temporary restraining order and that their general argument — that the curfews were instituted after widespread violence — would hold up in court.

In a press release on Covid-19 infections and city restrictions, Cleveland acknowledged the development: "This evening, a Complaint and Motion for a Temporary Restraining Order was filed in Federal Court asking the Court to immediately restrain the City and others from implementing and enforcing any further curfews in the City of Cleveland. The City will respond to this action in Court. We have no further comment at this time."

Mayor Frank Jackson has previously said in interviews the nightly curfews could last even further depending on circumstances.

Judge Patricia A. Gaughan will rule on the motion. 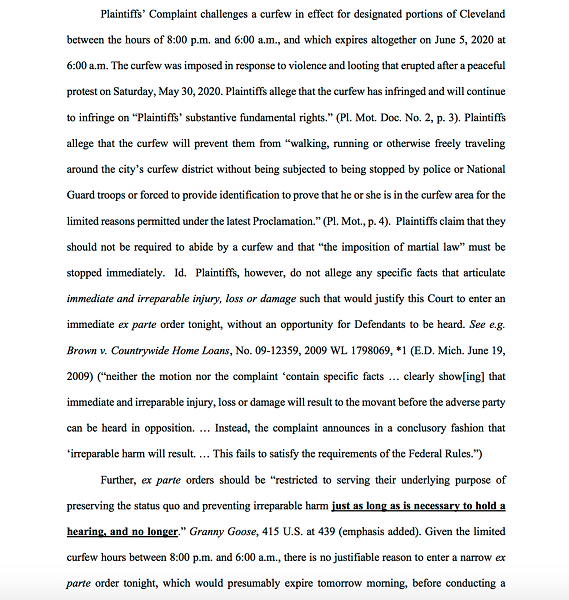