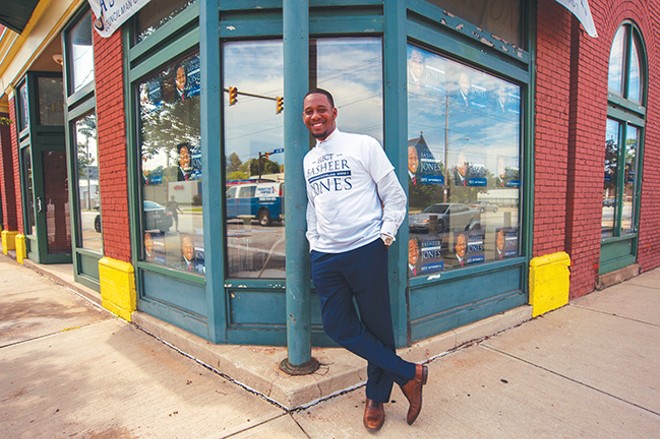 Cleveland Councilman Basheer Jones all but guaranteed he'd be running for Mayor next year in a virtual City Club Forum Wednesday morning.

"I didn't come here to play games," he told moderator Dan Moulthrop at the tail end of a wide-ranging conversation. "I didn't come here to be here long. I came here to make a change, and I want the history books to say that while I was here, I was a fighter, that I stood up for all people ... This Mayor's race is going to be interesting."

Jones presented himself as a crusader for justice and equity on city council, where he's served the Hough and St. Clair-Superior neighborhoods since his defeat of TJ Down in 2017. He said he has been unafraid to rankle colleagues and stake out lonely positions, including his support for allowing public comment at council meetings, for Indigenous Peoples Day and for inmates at the Cuyahoga County Jail. He said in the future, he wanted to see a Cleveland where young people felt empowered, where the atrocities of police were reckoned with, and where investments in people were pursued as aggressively as investments in buildings.

Among the hot-button local issues Jones addressed was the recent council resolution declaring racism a public health crisis. He said the resolution was merely a first step, one which he hoped could be used to challenge local institutions to meet tangible goals, including pay equity and better representation in upper management.

On the subject of recent racial justice protests, Jones clapped back at Gov. Mike DeWine, who called the idea of defunding the police "absurd."

"It's definitely not absurd," Jones said. "We have to absolutely look at how we are policing. It's not working. When I have to battle the re-hiring of the murderer of Tamir Rice, that's a problem."

He said the single biggest issue related to policing in Cleveland was the powerful police union and mentioned renegotiating the union contract as a key part of defunding police.

"I'm not pro-police," he said. "I'm pro-justice. And that means I support police when they're right, and I'm gonna get on them when they're wrong. It's not black vs. white. It's racists vs. everybody."

When Moulthrop pressed Jones on what would replace the police if they were to be constrained or shrunk — how would communities "stay safe"? — Jones said it was unfortunate the question even had to be asked.

"If communities felt inspired and encouraged and motivated, they would take care of their own," he said. "If the only time we can be safe is when the police come around, then that's a problem."

Jones said he wasn't sure if he supported the complete removal of the police, but said defunding could be used as a strategy to bring the union to the table to force its hand on diversity, cultural competency and police tactics.

More broadly speaking, Jones said Cleveland could not keep handling 21st century problems "in an 18th century way," and said in order to catch up with the times, Cleveland would have to confront a laundry list of structural inequities and rebuild trust in the community. That lack of trust has deepened even with Black political leaders in office for decades, Jones said.

"Some of the worst purveyors of structural racism are Black people in positions of power who continue to hold back the Black community," he said. "The problem we have in our city is a lack of succession planning. We are not preparing a new generation to take over. We have people who literally want to die with the torch in their hand, instead of passing it to the next generation to take our city forward."

Jones encouraged Moulthrop, as the City Club continues to host potential mayoral candidates in virtual forums, to ask not only what they will do, but what they've done.