When moCa Cleveland made the decision back in March to cancel a June exhibition called 'The Breath of Empty Space' featuring artist Shaun Lenardo's charcoal drawings of police violence, it did so not because of the coronavirus, but because "we encountered troubling community response that suggested at this time we were not prepared to engage with the lived experiences of pain and trauma that the work evokes. Through active listening, we acknowledge with humility the work we have yet to do. We are committed to deepening a culture of equity and inclusion, one that actively resists bias and oppression of any form."

That was conveyed privately to the Afro-Latino New York-based artist in a March letter from the museum. 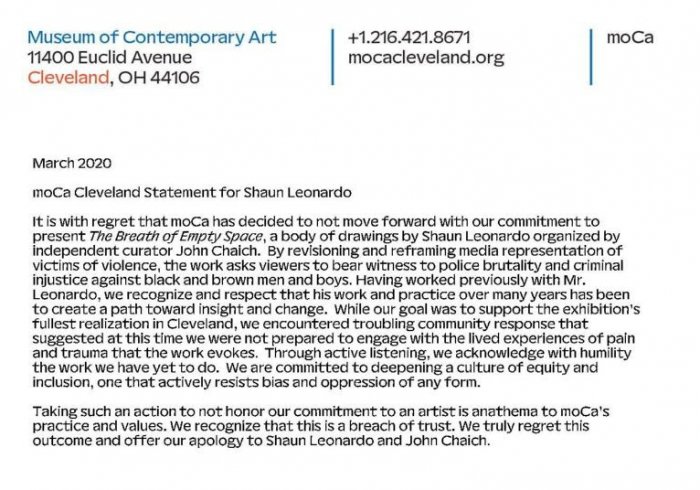 No public explanation was offered, and then the museum closed because of the pandemic.

Then, earlier this week, on the day after the exhibition — which was to include images of Tamir Rice, Freddie Gray, Eric Garner and other minorities killed and brutalized at the hands of the police — was supposed to have debuted in Cleveland, Lenardo sent an email to his followers announcing what had happened and explaining why, in the midst of the George Floyd and Black Lives Matter protests around the country, he was making it public.

The Breath of Empty Space

Yesterday would have been the opening of The Breath of Empty Space at Museum of Contemporary Art Cleveland. Amid this seemingly impossible moment we are living through, I've struggled with speaking about the exhibition at all. But given the content of the work, I feel it is important to share that the exhibition was not canceled due to the Museum's closure during the dangers of covid-19. Below, please read the statement from moCa.

I must make it clear that I was never given the opportunity to be included in outreach, and therefore, never had a moment to engage any community member regarding the show. What has become evident to me since the receipt of this letter, is that after grave mishandling of communication regarding the exhibition, institutional white fragility led to an act of censorship.

I wish to say to my community of friends and supporters receiving this email that I deeply believe in my practice. I try to remember the many nuanced and complex conversations that the work elicited while at MICA Baltimore, as reflected in this beautiful review by Louis Block in The Brooklyn Rail. And while I lament missing the opportunity to engage folks in Cleveland, I know there is much more needed from me and much more to come. If what we are bearing witness to in this current unveiling of systemic violence against black citizens, reminds us of anything, it is that as a country we have yet to reckon with the entrenched racism that I argue can only truly be located in people's bodies and psyches.

So for now, I will tend to my family while I quietly build with the integrity I hold for myself and the possibilities I seek in my work to break white silence and force us, collectively, into a difficult, yet necessary process of interrogation.


One day later, moCa issued a public apology on its website.

We are posting here an apology in addition to the statement of apology we offered to artist Shaun Leonardo in March 2020 referencing the cancellation of his exhibition The Breath of Empty Space which was to be shown in moCa's summer season. I would like to acknowledge our failure in working through the challenges this exhibition presented together with Mr. Leonardo. In doing so, we failed the artist, we breached his trust, and we failed ourselves. We received feedback from prominent voices in the activist community who advised that this presentation at moCa could stir trauma, leading to pain and harm. This was echoed by moCa staff members. In responding to this feedback, regretfully we did not engage Mr. Leonardo in creating space for dialogue and debate. We did not expand the conversation within our community. We prevented ourselves and our community from having the difficult and urgent conversations that contemporary art seeks to advance. Our actions impacted Mr. Leonardo, the curator John Chaich, and many others negatively. We are sorry. As has been made clear these past weeks, the time has come to confront racism with unflinching honesty. The work of anti-racism involves taking responsibility and supporting risk. We did not do this. We failed. We are learning now. We do not shy away from this failure. We are resolved to do better and to be held accountable for our needed improvement.


In interviews with Cleveland.com and the New York Times, Snyder declined to name any specific groups or individuals who raised objections, and moCa issued a statement and further apology to Lenardo only after he took the issue out into the open, which, judging from the coverage in Cleveland.com, seems like moCa would have preferred he did sometime other than in a moment of national momentum that would emphasize their mistake.

"Snyder... said the institution didn’t post its first apology on its website in March, but gave it to Leonardo at his request, leaving it up to him as to when he would publish it," Cleveland.com Steve Litt wrote. "It was MOCA’s understanding, she said, that he would release it immediately. Instead, Snyder said the artist waited until June 6."

The exhibition was shown earlier this year in Baltimore to critical praise.