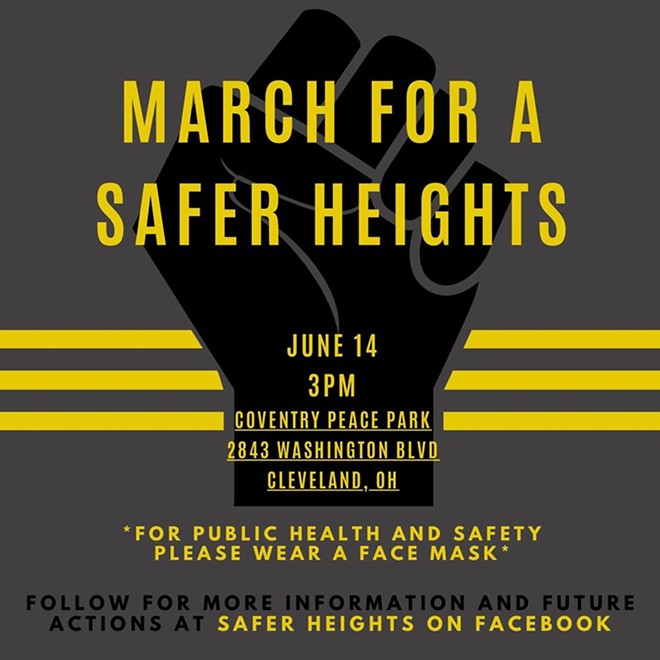 An emerging collective of recent Cleveland Heights High School alums and other young Cleveland Heights residents has planned a rally and march for Sunday afternoon. The goal of the demonstration is to pressure the suburb's leaders into holding police accountable while also continuing to speak in solidarity with Black Lives Matter protests nationwide.

"We've been to almost every Cleveland-based protest so far" said Desi Pelligree, a 24-year-old Cleveland Heights resident and organizer in the collective calling itself Safer Heights. "We weren't totally in love with the message we heard at the demonstration at Severance."

Pelligree said that as much as he and his peers loved their city, it was important to them that young people had a much more active voice in local politics. Sunday's action has been driven by a community of young people and will include a list of demands for City Council related to police accountability.

"We want to focus on the police reform we can do here in Cleveland Heights to ensure we have a more accountable police," he said, "but we also don't want to take away from the larger movement."

The event will begin at Coventry P.E.A.C.E Park at 3 p.m. After a line-up of speakers, the march will process down Coventry, turn on Mayfield, then Superior, then Euclid Hts. Boulevard, a route that intentionally traverses some of Cleveland Heights' most highly trafficked commercial corridors.

"It's important for a lot of people to see us," said Pelligree. "Cleveland Heights tries to sell itself so much on its attitudes about inclusion and diversity. This gives a voice to the side that we're not perfect, that we have a long way to go before we're the leaders in this fight that we may see ourselves as being."

Pelligree said that while Safer Heights was formed with this action in mind, the collective is moving toward becoming a community-based organization which will hopefully help oversee and implement changes in Cleveland Heights. "This is definitely not our last event," Pelligree said.