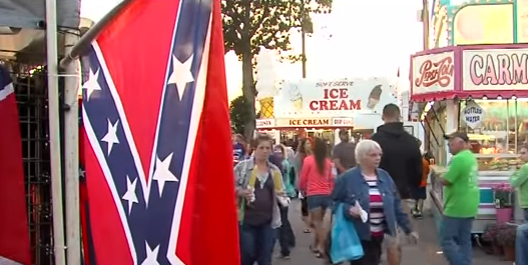 As good ol' boy institutions like NASCAR — and the U.S. Navy and Marines — have decided to finally ban the Confederate flag from being displayed at their events, the Ohio House of Representatives instead decided to pass House Bill 665 without amendments doing the same.

House Bill 665 is a county and local fair bill that in essence attempts to regulate the safety of amusement rides and also addresses things like funding for fairs.

While the bill was being debated on late Thursday and early Friday morning last week, House Democrats added two amendments that would have banned the "sale, display, possession or distribution of Confederate memorabilia at county and independent fairs," and also cut state funding to fairs that sold Confederate memorabilia.

These amendments were similar to the ban on the sale/display of the Confederate flag and assorted flag merchandise enacted by the Ohio State Fair in 2015.

But a Republican majority passed House Bill 665, without the language prohibiting the flag at fairs.

“It was treacherous that the majority of the Ohio House Republican members voted against the passing of my amendment to prohibit the selling, display, and distribution of any confederate memorabilia. The Confederate flag is a symbol of treason against our country and oppression against all descendants of slaves, who are mostly African Americans. The civil unrest that is occurring in the streets requires us to take action, not give lip service. If we want all of our county and independent fairs to be welcoming spaces this symbol must be prohibited. I am looking forward to introducing a stand-alone bill outside of what was presented on the floor. I am tired of legislators protecting racists acts."

Rep. Brigid Kelly (D-Cincinnati), issued a statement saying, "The Confederate flag is a symbol of racism. It is offensive and hurtful to many and simply has no place in our society. Other states and organizations have — and are — prohibiting the use of and display of confederate flags — including NASCAR, the US Marine Corps, and even the state of Mississippi is exploring (in a bipartisan way) taking the confederate symbol off of its state flag. There is no reason why Ohio can’t or shouldn’t follow suit."

The bill has now moved to the state Senate for their consideration.

The confederate flag continues to enjoy a mystifying amount of support in Northeast Ohio. Sadly, not a ton has changed from when we examined the topic at-length five years ago.