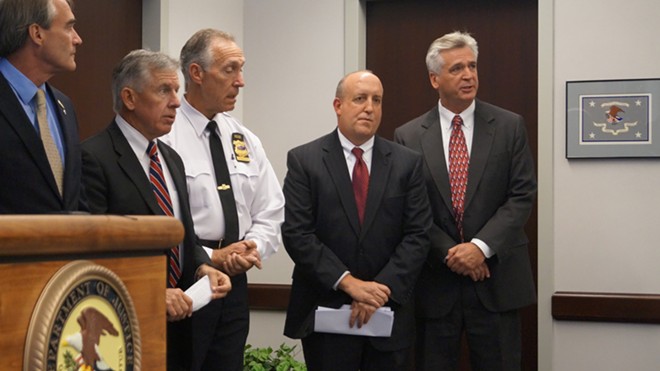 Cleveland Safety Director Michael McGrath is retiring at the end of the week. The former police chief was promoted to his current leadership position by Mayor Frank Jackson in 2014, months after the infamous deadly chase that resulted in the deaths of Timothy Russell and Malissa Williams. He later refused to resign after the shooting death of Tamir Rice and the scathing DOJ report that documented a pattern of unconstitutional conduct by Cleveland officers.

In an email to the Public Safety Department Monday, McGrath said that due to "personal and unavoidable circumstances," he would be stepping down from the director’s position Friday. City Hall sources have told Scene in recent months that McGrath's wife is ill and requires attentive care. His resignation or retirement was thought to be forthcoming.

McGrath thanked his colleagues and the first responders and support staff who have devoted their lives to keeping the community safe. But he closed his three-paragraph message with a prayer for reform.

"It is my hope that the voices of those that seek positive, progressive, and lasting change are heard," he wrote. "I pray for the very best for the city of Cleveland and the Department of Public Safety, and I pray that the City does everything necessary to ensure that she will remain a 'City of the Future' for its great citizens."

Assistant Safety Director Karrie Howard appeared at a city council safety committee meeting Monday and was referred to there as "Acting Safety Director." It is expected that Howard, who was endorsed by Mayor Jackson in a contentious 2018 judicial race, will be tapped to retain the Safety Director position permanently.

The City of Cleveland did not immediately provide a comment about McGrath's retirement. But Councilman Matt Zone, Chair of City Council's Safety Committee, confirmed by phone that he'd heard the news. Notwithstanding the violent excesses of the police under McGrath's leadership, Zone said he believed McGrath was sincere in his plea for reform.

Despite the controversies, Zone said, McGrath had devoted his life to the city and genuinely wanted to see a better, more modern safety department that was more responsive to community concerns.