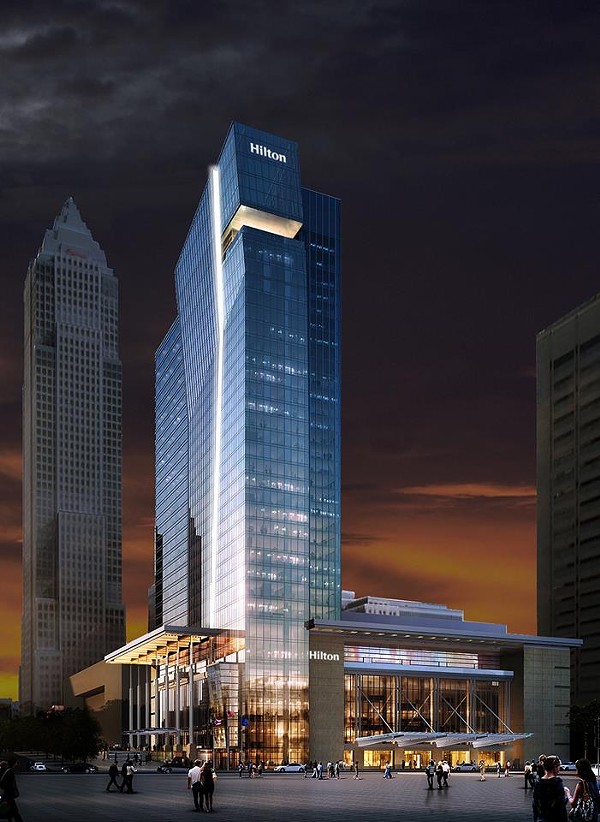 At minimum, $7.9 million will be requested from the County's General Fund as early as next week. That figure could balloon to more than $20 million by the end of the year, in a "worst case scenario" outlined by county budget officials.

These funds would initially cover $1.4 million in unpaid property taxes and more than $6 million in debt service that, per Astolfi, typically come from the hotel's revenue. Due to drastically reduced occupancy rates during the Covid-19 pandemic, the revenues simply aren't there to cover the costs.

That means the public, which paid for the construction of the $260 million hotel on the promise that it would enhance the attractiveness of the Convention Center and Medical Mart / Global Center, is now on the hook for these payments. But the general fund itself is on the brink of an enormous shortfall due to Covid, with declines in county revenues (mostly from property and sales taxes) currently projected at $76 million.

Unlike other Covid relief expenditures, like the proposed $6.8 million in rental assistance for county residents, the Hilton bailout cannot be covered by federal CARES Act dollars.

The biggest insult in all this is that, according to county budget officials, the Hilton's books will remain closed. The hotel's occupancy rate is evidently "proprietary information," even though Destination Cleveland's David Gilbert has said recently that most hotels in the area had seen 90 percent declines in occupancy compared to last year. (Those numbers are gradually rising.)

Just like in the region's endless subsidies for sports arenas, the public will shell out millions based on a private company's word.

Back in 2013, when former county executive Ed FitzGerald was promoting the county hotel on the familiar 'If You Build It, They Will Come' platform, critics predicted the current scenario.

“If the hotel is not profitable, the county is liable for that debt service," former County Councilman Dave Greenspan told Scene at the time. "That’s an exposure I’m not comfortable with encumbering upon the residents of this county...I don’t believe the county should be in the hotel business."

As Scene noted at the time, "the fine people of Cuyahoga County front the risk, and Hilton Worldwide walks with the benefits."