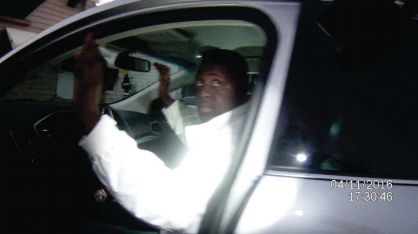 The Sixth Circuit Court of Appeals ruled Thursday that Lamar Wright, a Black man who was tased, pepper-sprayed and "maliciously prosecuted" by Euclid police officers in 2016, can have his day in court.

The case, which Scene first reported on in 2017, is just one example of the racist policing and excessive force controversies that have plagued the eastern suburban department in recent years. (The brutal beating of Emirius Spencer, by an off-duty Euclid officer, was highlighted on the podcast Serial in 2018. A case on behalf of Luke Stewart, a Black man shot and killed by a Euclid police officer in 2017, is pending.)

Lamar Wright was parked in his vehicle when two Euclid cops came upon him in plain clothes, with weapons drawn. In Cleveland, under the Consent Decree, an officer unholstering and pointing their firearm constitutes a use of force incident that must be documented, for the record. Wright naturally thought he was being robbed and made to drive away, but when he realized that the men were officers, he put his vehicle in park and put up his hands. He had no weapon.

The officers holstered their guns but tased and pepper-sprayed Wright at point-blank range anyway. In the body cam footage of the arrest, the officers tell Wright that they thought he was reaching for a weapon. In truth, he was merely reaching for his colostomy bag. Wright was recovering from recent surgery. The officers, who threw Wright to the ground, caused bleeding around the stapled bag.

Wright was arrested and charged, unthinkably, with obstructing official business, resisting arrest, and criminal trespass. For good measure, he was also issued a traffic citation for driving under suspension, driving without headlights on, and failing to use a turn signal. Wright was then detained for nine hours and subjected to intrusive body scans for drugs. None were ever found.

In the opinion Thursday, Judge John Bush noted that this case occurs at a moment when police brutality is "dominating attention" in the United States. He disagreed with a district judge who ruled that the Euclid officers Kyle Flagg and Vashon Williams should be granted qualified immunity, the doctrine which protects cops and other government officials from civil lawsuits unless their actions violate clearly established statutory or constitutional rights.

The evidence that Lamar Wright and his attorneys from Friedman and Gilbert provided to refute the qualified immunity claim included a Chris Rock video, in which Rock discusses Rodney King and police misconduct, which was played for Euclid officers as part of their official use-of-force training, and a cartoon in the city’s police training manual that portrays an officer in riot gear beating a civilian, with the caption "protecting and serving the poop out of you.” Judge Bush called the cartoon "offensive."

Yes, we do have a broken and toxic police culture in this country. https://t.co/RBfMKk8Uzs pic.twitter.com/imW6RsGPmt


Judge Bush's opinion explains how a reasonable jury could find the force used against Wright excessive and the arrest, detention and prosecution unconstitutional. The attorneys for Wright are keen to let a jury weigh in on the use of force policies and training procedures in the city of Euclid, "where police brutality is treated like a joke."

Jacqueline Greene, one of Wright's attorneys, said that the actions of the Euclid officers, and their attempts to justify them after the fact, were "blatant attempts to criminalize Wright's blackness." The officers, for example, claimed that the arrest of Wright was the result of a "drug investigation," though they found no drugs on him.

“At this moment in history, as streets throughout Ohio, across the country, and around the world swell with protests against racist policing and brutality, this decision symbolizes a realization that police lies and violence against Black people cannot and will not be tolerated,” Greene said. "Now that his case can proceed, Mr. Wright looks forward to his trial."