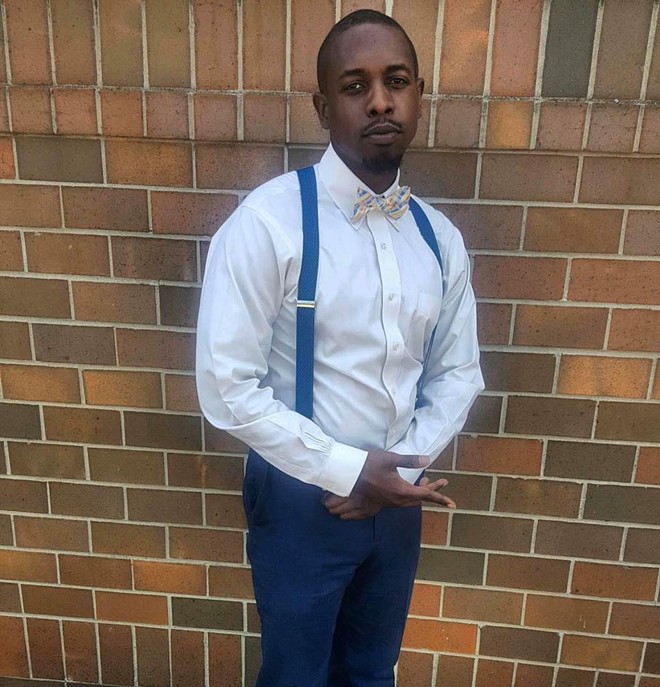 On May 21, 2014, Cleveland Sgt. Timothy Patton was investigating a burglary on East 128th Street when he pursued an apparent suspect into the garage of a residential house on the east side of town. His gun was drawn.

Inside the garage, lying prone on the concrete floor and fearing for his life, Kipp Holloway announced his name and insisted that he was unarmed. Patton entered, and, upon seeing the Black man lying on the ground, fired his pistol once: The bullet seared Holloway's left forearm and caromed back into his chest. “Patton yanked [Holloway] up to his knees by the collar and forced the barrel of his weapon into Holloway's mouth,” according to a lawsuit filed against the city of Cleveland just a few months later. More police officers showed up and determined that, no, Holloway did not have a gun, after all.

On the way to the hospital, Holloway howled in pain as another officer allegedly shouted that he was going to “blow [Holloway's] brains out.”

The stories of American police violence run together in broad details—the shooting, the threats, the oppressive and domineering actions—but each victim finds his or her own unique way into the hands of a violence system, almost always unsuspectingly.

Holloway had been out in the neighborhood earlier that day to pick up some items for his son, who was due to be born later that week. When he saw two acquaintances driving by, he flagged them down and caught a ride to a nearby Rapid station. On the way, the guys noticed a red pickup truck tailing them; the two other men told Holloway they'd just stolen some things from the driver’s nearby business and they were fleeing the scene. A car chase ensued, taking Holloway on a 65-mph drift across the east side. After crashing into a fire hydrant, the men ran.

Holloway dashed into a nearby residential garage and listened to the sounds of dispatch radio outside grow louder before Patton found him.

“I woke up the next day in a hospital room full of racist police officers just mad that I’m alive,” Holloway says in an interview six years later. “The strength from that only comes from God. For them to look at you like you’re nothing, for them to look at you as you’re lucky because they know you’re supposed to be dead, you know what I mean? The police are looking at you like, ‘Yeah, you got away with this one, but you know you’re supposed to be dead.’”

It's a feeling that one group America has been trying to explain to the other for the past few centuries now. The jagged argument over the value of Black lives in this country once again burst into conflagration in the spring of 2020, as the grim death of George Floyd at the knee of a Minneapolis police officer conveyed a timeless struggle in a sharp, brutal visual for all to see. Across the U.S., protests have called for the abolition of police. Stories like Holloway's are one example of the terms.

On his second day at the hospital, Holloway's son was born in another part of the building. The police refused to let him see his child, continuing to hammer away with questions about guns and criminal prosecution. He insisted again and again that he had nothing to do with whatever sort of theft they were investigating. He also grew increasingly aware that he was playing a role in the twisted relationship between police and the Black community in Cleveland and everywhere.

“A lot of the officers in the hospital room with me—well, that was their sergeant that shot me,” Holloway says. “They’re feeling some type of way—and realizing the fact that the sergeant was probably about to face some discipline. And I’m alive! It was very crazy.”

He was charged with breaking and entering and possessing criminal tools, but the charges would be dropped during a quick two-day trial in September. Just before the trial began, Cuyahoga County Prosecutor Timothy McGinty filed a motion to request that the all evidence “regarding the Cleveland Police Department shooting the Defendant in the arm during the course of apprehension be excluded from the pending trial.”

The prosecutor got his way.

“I went through a whole trial in which my jurors didn’t even know why I was shot or even in the situation I was in,” Holloway says.

He points out a fundamental misuse of resources: If the county has a certain power to wield—the personnel, the time, the stature of its own office, all capable of bending a criminal trial to its will—then why not redirect it toward some level of equity among the community? Why go to all the hassle of reinforcing the very system that’s holding down the people it’s charged with protecting? Variations of the same question asked for all time.

The following year, Holloway filed a lawsuit against the city and Patton, describing the physical and psychological trauma that followed his encounter with the officer. The civil litigation landed in federal court, where Patton categorically denied Holloway's story. In 2017, the city of Cleveland settled a lawsuit with Holloway, agreeing to pay him $375,000 to close the matter.

Even today, Holloway can only move his ring finger and pinkie on his left hand, something he spent years in physical therapy overcoming—relearning the basic activities of a hand. It took him a long time to be able to hold his young son. He is still living with a bullet in his chest.

After his long detour into the crisis of police violence began to quiet down, relatively, Holloway moved his family out of the state. “It was to be safe from the restrictions of not having immunity of not knowing that [the police] are going to be there instead of trying to kill me for being alive. I love my city. But the integrity of it, as far as—they tried to kill me…”

Since 2014, the inequities of modern, militarized policing in American cities have been cast into stark relief. An authoritarian president stokes the dehumanizing traits of a fractured country. The people, trapped in an economic crisis and a global pandemic, have no move left but to come together in the streets and call the whole tired burden what it is: systemic racism cut into the veins of American life.

Today is Juneteenth in America, a nationally celebrated holiday marking the historical end of slavery in the U.S., a moment in time when Black Americans took their freedom and found a way to break through and communicate with the ongoing experiment in democracy. “Juneteenth may mark just one moment in the struggle for emancipation,” Jamelle Bouie writes in the New York Times today, “but the holiday gives us an occasion to reflect on the profound contributions of enslaved black Americans to the cause of human freedom. It gives us another way to recognize the central place of slavery and its demise in our national story.”

Holloway says there’s not much to plan in the way of a vibrant community celebration this year, what with the pandemic quarantine still buzzing at low wattage throughout much of the country.

“African Americans as slaves were brought here, and it’s not really acknowledged as Juneteenth as it should be,” he says. “But just as America gained independence from Britain, African Americans gained independence—but it wasn’t no recognition. It was like, ‘Ah, you should just go ahead and go apart.’ No, that’s not how it was supposed to be. The United States has to acknowledge its wrongs: ‘Yes, we did do this to these people, but this is the solution.’ It’s laws and policies that could be in place right now if they wanted to prevent any of this.”

Today, in 2020, the ongoing protest movement is ringed with remembrance for all that's come before. “Say their names” is a chant that often accompanies these marches, a clarion call to keep the victims of police violence in the collective consciousness of a country that just can't seem to get it right.

Kipp Holloway is another name, of course.

In some ways, he says, he's put the incident behind him. Life moves on. But in every other way, the story persists. His throbbing left hand is a constant reminder. So too is his son, insofar as your own child can remind you of both the past and the future in all of time's strange vicissitudes. But what else is there without hope?

“Being a Black father, man, every day it’s a struggle to try and see a future that’s going to be positive for my son and his son,” Holloway says. “We talk about reform. We talk about a whole lot of things, but you gotta look at this: We’re only about 50-some years from our civil rights. Now, it’s starting to be some acknowledgement. It’s a lot of sweeping under the rug, but it is some acknowledgement.