On Saturday June 6th, Brandon T. Patterson, a Shaker Heights native who currently lives in Los Angeles, organized “Family Reunion: We Are More Than a Resistance,” an event at Cudell Park “In Honor of Tamir Rice’s 18th Birthday.”

Patterson had a flyer designed, printed t-shirts to give away to the first 200 attendees, gathered 30 volunteers, and rented a PA system. Activities planned included line dancing, tug-of-war, meditation, planting ceremonies, and tables for voter registration and census completion. The event had everything— except the blessing of Tamir’s mother, Samaria, The Tamir Rice Foundation, or the support of the leadership of Black Lives Matter Cleveland.

The Foundation first became aware of Patterson’s event when they discovered flyers posted online for a Facebook event and a GoFundMe page that had already raised $1,200. The first time Rice and Patterson ever spoke on the phone regarding his event was when she reached out to ask him to take the fundraiser down. In an interview, she also said that Patterson’s event page and GoFundMe misrepresented their relationship: “In the original description, he actually said that I’ve been standing by his side doing this whole thing… I was a little confused by what was going on.” That description was changed at the request of Ms. Rice’s lawyers, she said.

Rice did consider signing off on his event after talking to him, but decided against it when Patterson pushed for her to appear on MSNBC with him (he told her he has a friend that is a producer at the network), she said. Ms. Rice recalled thinking, “Why would I wanna do an MSNBC interview with you? Who are you?” From that point on, Rice insisted that Patterson only deal with her lawyer, she told Scene.

This is a problem that Rice says “has gotten out of hand” since The Tamir Rice Foundation started in November of 2019. On Wednesday, Evan McDonald of Cleveland.com reported on unauthorized events and fake Instagram accounts that had been created in her son's name, some attempting to solicit money.

However, there is a post about his event that reads, “The event happening this Saturday is NOT an official event through the foundation!!!” 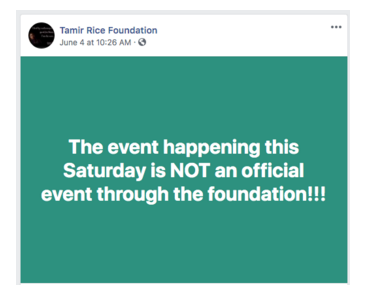 Patterson, according to his social media postings, is a teacher in Los Angeles, but returned to Cleveland “for lockdown.”

At the same time as Patterson’s event, Black Lives Matter Cleveland organized a “Justice for Desmond” protest, outside the Cleveland Police Department 2nd District Precinct. On the event discussion, BLMCLE issued a statement emphasizing that they do not support or condone events that turn into “a barbecue with the police.” The statement calls for people to more carefully consider the goals and background of the organizers of any actions they attend.

"It has been brought to my attention that some heartbreaking false truths are being spread about this event and myself," he wrote.

"Ms. Rice and I speak multiple times a day. She is the first person I have on the phone when I wake up and the last person when I attempt to go to sleep at night, which I have been miserably failing at recently.

"This photo is taken directly from the official Tamir Rice Foundation FB Page. You can see Ms. Rice's personal endorsement of me and this event. I have to run EVERYTHING by her before it is actualized.

"This is not the foundation's official celebration because Ms. Rice has something planned at the end of this month which I will also be supporting. These are logistics that we discuss constantly."

When asked about Patterson’s claim in that post that “Ms. Rice and I speak multiple times a day,” Rice responded flatly, “No. Absolutely not.” She says that they were introduced through a colleague some time ago, and recalled that when she was having some problems with her dog a couple of years ago, Brandon’s grandparents adopted it. According to Samaria, “That’s the only affiliation we ever had.”

When speaking about Patterson’s choice to throw a party in the park where Tamir was murdered, Rice was audibly indignant:

"That space wouldn’t even be there if I didn’t have a dead son, just keep that shit in mind. So when people go up there and wanna do shit like that, that is so fucking disrespectful. Knowing that I’m trying to create a space that is sacred… It’s just a damn shame, I’m gonna be honest with you," she said.

This frustration is not isolated to Samaria Rice, though.

Kareem Henton, a co-founder of Black Lives Matter Cleveland, says that their organization has been dealing with “other so-called advocates” since they formed. Amidst the flurry of events that have occurred in the wake of George Floyd’s death, Henton confirmed that the problem of clout-seeking opportunists and political careerists trying to co-opt the movement for personal gain has only gotten worse.

He noted also that people attempting to use Tamir’s and other victims’ names for unsanctioned events do this quite often: “Nobody ever says do you want to be a part of this? Is this going to be okay with you?”

Henton says Patterson reached out to seek BLMCLE’s support for his event, but Henton immediately referred him to Samaria Rice. In his emailed comments, Patterson stated, “If Kareem had an issue with anything I wish he would have brought it to my attention during our conversations where he was well aware of the day & time of the event.”

Henton notes that prior to organizing any event that lifts up a victim’s name, BLMCLE always seeks the approval of families. Several families that BLMCLE have approached in the past about actions did not wish to publicize or politicize their grief, and the organization always respects that.

“These families that lose their loved ones, they’re more than just a hashtag,” Henton said, He offered the following advice:

1. Seek out the advice of the people most affected by the issue that stirred you to action, and respect black leadership.

2. Try to get in contact with people already involved in activism who have been doing the work of organizing and seek their advice as to where your time, money, and energy would best be spent.

3. Make sure the organizers do not misrepresent who they are. If an event prominently features the name of a police shooting victim or has “solidarity with” or “unity with” BLM in its title, find out if the organizers have any actual connection to the victims or their families or any tangible relationship with established BLM organizers.