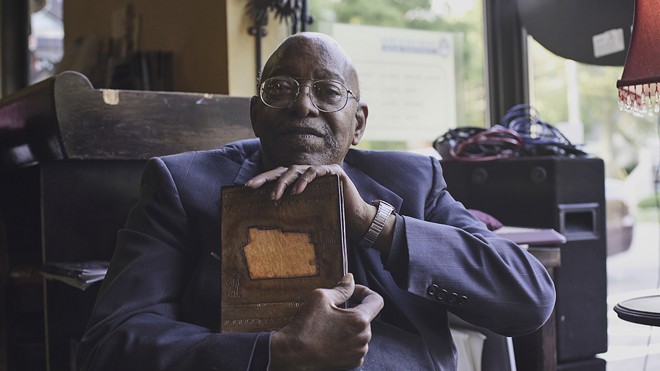 Production is underway on 'Comeback Evolution,' a documentary that tells the fascinating story of a lesser-known Akron legend — Walter Delbridge, a prolific poet and philosopher whose poems were published alongside the likes of Langston Hughes, Lead Belly, Gwendolyn Brooks and Audre Lorde.

Filmmaker Kate Tucker, who was born and raised in Akron, says the origins of the movie go back to the loading dock of the Borders Books in Cuyahoga Falls, where Delbridge worked and where he met Tucker's father, who made deliveries there.

On one occasion, Tucker’s father invited Delbridge to have dinner with some of his college professors and his daughter, who currently resides in Nashville but at this particular time was living in Seattle and happened to be in town.

“Walter learned I was a songwriter and asked if I’d look at his poetry, saying maybe I could find some inspiration for my music. He gave me boxes of cigar-stained, handwritten manuscripts to take back to Seattle. I poured over them, fascinated. I asked if he would let me type them up and pitch them for publication…As he shared his life experience, I realized his story was just as compelling as his work and people needed to hear his voice.”

Delbridge, who spent a lot of time in Akron, years ago changed his name from Dancy, his mother's maiden name, to Delbridge, his father's, is a man of impressive intellect who was on a road to a potentially successful academic career after Civil rights leader Vernon Odum took Delbridge under his wing and encouraged him to attend Morehouse, a private and historically a black men's college in Atlanta.

From Delbridge’s biography: “By the second year he was sophomore class president, editor-in-chief of the Morehouse Tiger, and lead actor in the distinguished Morehouse Spelman Players, the troupe which Samuel L. Jackson credits for inspiring him to become an actor. In the summers, Delbridge attended Harvard and Yale through scholarships with the Ford Foundation, and he was elected a Charles Merrill scholar, given a stipend to study overseas at the Sorbonne.”

In 1968 the momentum of Delbridge’s success as a student would come rapidly to a halt due to the tragic assassination of Dr. Martin Luther King, Jr. Delbridge decided to drop out of school before being drafted the following year. In a strange and unexpected turn of events, the draft psychiatrist, upon interviewing Delbridge, found that he thought it possible that he would be “…studied in American Literature one day.” The psychiatrist diagnosed Delbridge with paranoid schizophrenia and he was subsequently picked up by Akron police and admitted to a mental institution.

From Delbridge’s Bio: "After 6 months at Fallsview Psychiatric, Delbridge emerged a changed man, but he had not lost his academic ambitions. He quietly enrolled at University of Akron, where he graduated on the Dean’s List with a B.A. in English in 1971. The University offered him a fellowship to continue his studies and he taught four classes that following year.

Tucker, who has known Delbridge for over 17 years now, comments on this event: “He was committed to a mental institution and given heavy medication for schizophrenia. Whether or not you’ve been in a psych ward, you can imagine that being taken from a vibrant student life in Atlanta and picked up by police in Akron to be institutionalized, prodded over and stripped of your rights by a white establishment who determines when or whether you get to be released, while being confronted and attacked by patients within the walls, would have its effects…”

Along a life’s path full of significant strife and tragedy, and during what Delbridge describes as “one especially heightened state” in 1979 while being lulled by Mingus and Coltrane, he began to write what would become a 133-poem cycle titled “Isolation and Intellect.” It was written over a period of 24 hours and Tucker and Delbridge have a contract to get it published.

In the poem “Fugue,” Delbridge writes:

“Comeback Evolution” has been in production since 2016. Tucker is collaborating with her sister/producer Joanna Tucker and Miriam Bennett, a cinematographer and film professor at Cuyahoga County Community College.

Tucker has had an impressive musical career, having collaborated with musicians such as Mark Watrous of The Shins, and plays with a feministic side project called Band of Their Own featuring members of Belly, Veruca Salt, Letters to Cleo and The Bangles.

Tucker has spoken at many acclaimed film festivals, including Stony Brook, Toronto and Sundance, about the intersection of film and music.

“I write my songs with films in mind, or moving picture rather, a sort of cinematic vision…I wanted to test this out with, 'The Shape The Color The Feel' visual album, giving 10 different filmmakers complete creative control to interpret the songs visually, resulting in 13 music videos, a short film and a documentary. Cleveland filmmaker Adam Smalley wrote the film 'Let Me Go,' based on my song of the same name, which he shot in Akron and Cleveland…”

Tucker hopes that her film “Comeback Evolution” will have a jazz element to it, although it is uncertain at this time. She expects the feature-length film to be finished in the next six months or so. Delbridge considers Tucker to be bright, enthusiastic, and resourceful and says she “has her own sly sense of humor” in how she deals with him.

Delbridge still lives a somewhat secluded life in Akron’s oldest neighborhood of Middlebury and is optimistic about his life and the film.

“I hope that the viewer sees an individual struggling to reestablish some kind of reasonable relations with the environment and the people he encounters after going through smashing, smashing experiences of being told he’s insane and has a condition he will never overcome and that he cannot get back to the place that he once was as a decent, respectful citizen," he says. "In other words, once you have a breakdown, according to psychiatrists, you never heal. I disagree with them vehemently. I think you can heal. I think you can become if not the person you once were, you can become the person you’re meant to be. By the validity of your own life experience.”