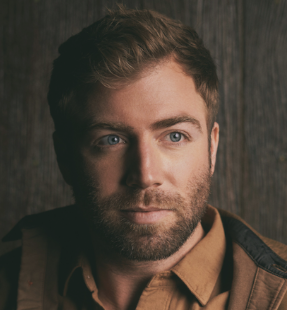 Country singer-songwriter Teddy Robb grew up in Akron and played football at Kent State University before moving to Colorado and then Nashville and devoting himself to writing songs and touring.

Robb now writes with some of the best songwriters in the Music City, including Grammy-winner Shane McAnally.

He has incredibly fond memories of Northeast Ohio, something that’s reflected in “Heaven on Dirt,” his anthemic new single about growing up in this part of the country. “It was heaven on dirt,” he sings in the track that's due out tomorrow. “Ain’t no place on earth like that 40-acre plot where you talk to God ’cause your cell phone didn’t work.”

Born at Barberton Hospital, Robb split time between living his mother and father while growing up. His father lived in Portage Lakes and his mother lived in Clinton Township.

“I had a lucky childhood,” he says via phone from his Nashville home. “At my mom’s, we had woods and fields and kind of grew up on a farm. At dad’s, I had Portage Lake. I was out on the lake fishing and doing that kind of thing. For this song, ‘Heaven on Dirt,’ I can’t help but be transported back to my childhood and thinking about fishing and hunting and being in the woods and boating and all that kind of stuff. I’m really lucky to have a song going to radio that also connects to me so much.”

“It wasn’t until 16 that I started getting into country music,” he says. “That was so eye-opening. I felt like I got everything I loved about classic rock but with stories that related so well to my life. With country, the stories came into play.”

Robb moved to Nashville in 2013 and started playing the city's downtown clubs. He then relocated to Colorado for a gig at a small ski resort bar in Vail, and that led to a deal with Sony Nashville after one of the club’s patrons introduced him to the man who would become his producer. At that point, he then moved back to Nashville, where he now resides.

Disappointed that an April headlining gig the Dusty Armadillo in Rootstown was canceled due to COVID-19, Robb says he’s anxious to get back on the road and revisit Northeast Ohio.

“If it were up to me, I would be on the road tomorrow,” he says. “I’m ready to get back to work. It’s been really challenging trying to figure out how to be a musician without being able to play shows. I’m ready, and I told my whole team that I’m ready. I think people are ready to start going to shows, but I don’t want to be the one who contributes to the spread, so if we have to wait a little longer, that’s what we’ll do.”