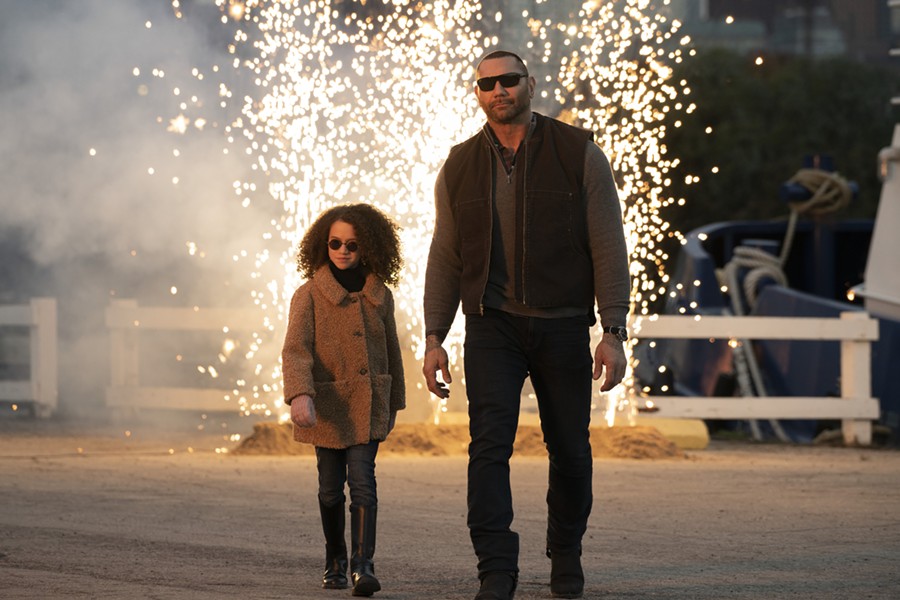 Poor My Spy never had much of a chance. The kid-cop buddy comedy starring Guardians of the Galaxy’s muscle-bound Dave Bautista and nine-year-old Chloe Coleman (Little Fires Everywhere), was meant to open last August. It got bumped to January, and then, to paraphrase the prophets of Third Eye Blind, it got bumped again, and then bumped again.

It looked like My Spy might sneak into the April slot vacated by the hotly anticipated No Time to Die but was then postponed indefinitely due to Covid. At that point, Amazon swooped in and scheduled it for a streaming release, which felt more like a summary execution than a resurrection. The film is now free on Amazon Prime and will be screened at some drive-ins.

This sputtering release saga is no doubt a letdown for the cast and crew, but it won’t be for viewing audiences, who are trained to have lower expectations for direct-to-video products. My Spy isn’t much more than downtime viewing, a low-grade semi-sweet Bautista vehicle that manages a few genuine laughs as it rigidly adheres to a tried-and-true action comedy formula. But it’s a mixed bag. Directed by Peter Segal, the Tommy Boy alum responsible for some of Adam Sandler’s more forgettable outings in the early aughts – Anger Management, The Longest Yard – My Spy feels less like a PG-13 movie than a PG movie intercut with an R-rated one.

Bautista is Jason Jones, or JJ, a CIA bruiser who’s more suited for military combat than covert ops. After blowing his cover in the opening scene, he’s dispatched to Chicago on a softball surveillance assignment with an adoring tech, Bobbi (Kristen Schaal). That funny-voice comedic actors Schaal and Ken Jeong are peopling the CIA in My Spy should give you an idea of its verisimilitude.

Once again, JJ’s cover is instantly blown, this time by the kid on whom he’s supposed to be silently keeping tabs. The young Sophie, (Coleman), spots a hidden camera in her apartment and tracks the wi-fi to a unit upstairs. Sophie and JJ make a deal. She won’t reveal his identity if he agrees to teach her some spycraft. Voila! The film’s second and third acts more or less write themselves. The tough guy JJ is softened by Sophie’s cuteness, and Sophie, who had been struggling to make friends, is emboldened by JJ. Naturally, JJ and Sophie’s mom Kate, (Parisa Fitz-Henley), kindle a chaste romance.

All that material is to be expected. What’s unexpected is the occasional burst of violence. It’s not graphic, necessarily – it’s not like there’s much blood – but there are sustained gun fights, explosions and “scenes of peril” that don’t gel naturally with the kid comedy atmosphere. My Spy’s target audience remains a mystery.

Schaal is responsible for the movie’s funniest line, and Bautista, who’s a more natural beefy sidekick than a leading man, is nevertheless well-cast as the reluctant spy coach. He’ll never have Dwayne Johnson’s range of expression or charisma, but as the latest WWE-to-Hollywood darling, he’s learning to manipulate his brawn for laughs.

My Spy is not showing in any theaters in the area.