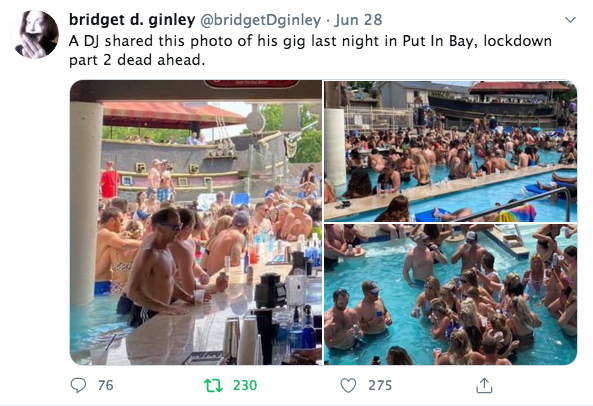 Put-in-Bay is experiencing peak visitors well before the peak of the summer season usually arrives, and while many businesses are likely thankful that the forecasted dip in tourism hasn't proven true for the island, officials are instead experiencing worry as the Lake Erie destination seems to have attracted a healthy portion of people who don't believe in wearing masks or practicing social distancing.

A viral tweet over the weekend showed a packed pool that In The Before Time would have simply been fodder for pee jokes but In These Times drew concern that Put-in-Bay is for the coronavirus what Florida Spring Break is for chlamydia.

A DJ shared this photo of his gig last night in Put In Bay, lockdown part 2 dead ahead. pic.twitter.com/eU569NT4Pl

“There’s not a proprietor on the island who doesn’t have (safety) as a top priority,” Peter Houston told the Sandusky Register. “From the ferries to the bars, to the restaurants, to activities and attractions, they’re all doing what’s required of them: setting up appointments, keeping people waiting their turn. We are very, very aware of all the rules and regulations and are working so hard. Every individual who comes here has the choice of what they’re comfortable with. If someone chooses to not wear a mask and stand too close to someone, that’s their First Amendment right.”

“Many (businesses) are doing a very good job limiting their seating, much different than the usual Put-in-Bay. Other business owners are making other choices, it’s not something I can condone," she told the paper.

The Ottawa County health department gets 3-5 complaints a day about Put-in-Bay businesses.

An Arizona Cardinals player was arrested after driving his car into Lake Erie over the weekend, and that's not even the most mind-boggling thing that happened in the past month.

The Island saw a record number of EMT calls a couple of weekends ago with 26 calls, five that required a medical helicopter, and the usual grab-bag of alcohol-related incidents and drug overdoses.

Per the Register: "[Mayor] Dress said she's calling a meeting of the Safe Island Task Force this week to talk to business owners about ways to curb some of that activity, including having business owners ensure their staff knows when to stop serving someone alcohol and also to encourage businesses to stop allowing overnight golf cart rentals."

Oh, and a new interim police chief was sworn in after a disgusting incident in early June involving a handful of island cops and a group of Black tourists that led two officers to resign and brought the FBI to the island to once again look into allegations that the police force routinely utilizes excessive force and displays racial biases.

Gov. DeWine today said that the state's rising coronavirus stats are not due to increased testing alone and that hospitalization rates for COVID-19 patients are the highest they've been since April.