County Weighs $7.9 Million Expenditure to Cover Hilton's Taxes and Debt Payments, Which is Definitely Not a Bailout 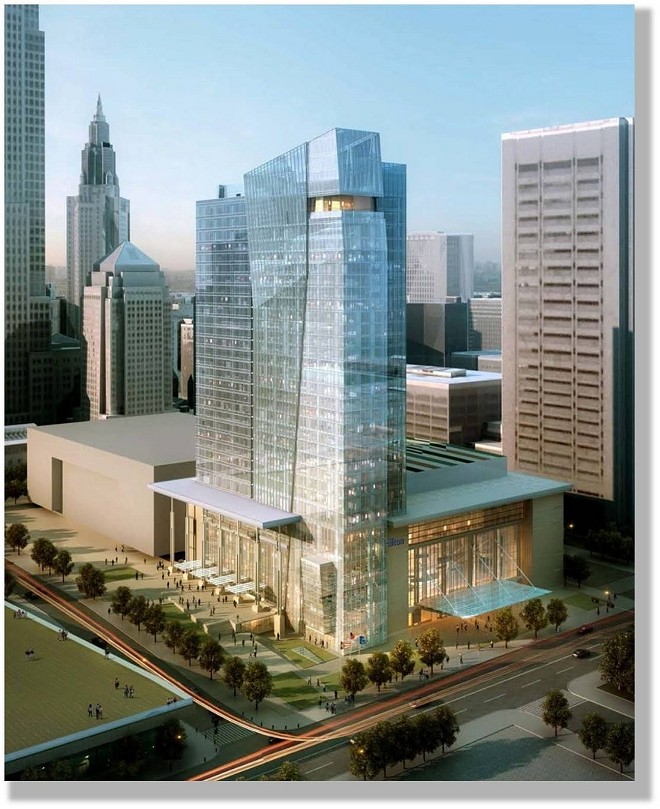 Cuyahoga County Council's Finance and Budget committee met Monday afternoon to receive additional information about a proposed bailout of the Hilton Cleveland Downtown Hotel. The controversial measure, proposed in recent weeks, would entail an additional $7.9 million expenditure from the county's general fund, at minimum. It would cover the balance of Hilton Worldwide's expected 2020 contribution to debt service and taxes, which the hotel chain alleges it cannot pay due to loss of business caused by Covid-19.

The county maintains that as the owner of the facility — Hilton Worldwide merely manages it, and receives an annual fee for doing so — taxpayers are obligated to cover the full debt and tax load. In fact, the county has objected to the "bailout" terminology on these grounds.

Until now, county taxpayers and Hilton have teamed up each year to cover the substantial payments on $230 million in municipal bonds taken out in 2014 to finance the hotel's construction. Hilton has already paid $3.7 million in the first half of 2020, but said it will be making no more payments for the rest of the year. The county claims, then, that it is on the hook for $6.5 million in debt service and $1.4 million in taxes, (on top of the $9.5 million it had already budgeted for its own contribution).

Monday, reps from CHMWarnick, the hotel asset management company that the county retains to provide updates about the Hilton's financial performance, gave a PowerPoint presentation outlining the grim regional and nationwide trends that supposedly justify Hilton's inability to pay its freight. (Last week, incidentally, County Council extended CHMWarnick's consulting contract for three more years, to the tune of about $250,000 per year.)

Hilton's occupancy numbers are alleged to be proprietary information, but CHMWarnick provided data about recent group cancellations at the Hilton and per-room revenue losses for various hotel classes. The Hilton Cleveland Downtown is considered an "upper upscale" hotel, one tier below the topmost "luxury" class.

In March, an 80 percent year-over-year decline in revenue per-room nationwide was described as unprecedented in history. "Nothing comes close," said CHMWarnick VP Larry Trabulsi. Covid's effects, he said, have been even more severe for luxury and upper upscale hotels than midscale and economy brands.

Cleveland.com reported Monday that the management agreement between the county and Hilton, promoted by then-County Executive Ed FitzGerald and approved by county council with only one dissenting vote, obligated county taxpayers to cover shortfalls on projected revenue. The lone dissenter, Dave Greenspan, told Scene in 2013 and repeated to cleveland.com last week that he thought the county should not be in the hotel business.

Multiple county councilpeople Monday proclaimed their support for the hotel, in spite of the recent financial peril.

"While I understand these concerns," said Councilman Michael Gallagher, who represents the county's southwestern suburbs, "that hotel, at a cost of $230 million, produced $180 million for Northeast Ohio [via the RNC]. Any suggestion that the hotel, in any way shape or form, is a mistake ... is a mistake."

Councilwoman Sunny Simon and Committee Chair Dale Miller both suggested that the committee should henceforth monitor the hotel's financial progress on a monthly basis, on the theory that if conditions improve — if there's a vaccine, for example — the county's bailout might be amended or rendered unnecessary.