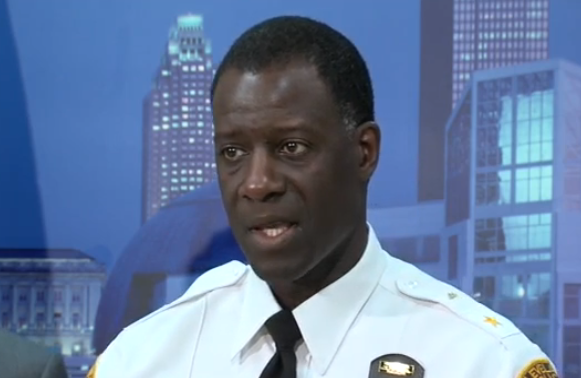 At issue are details from the Cleveland demonstrations for George Floyd on May 30, demonstrations which devolved into widespread vandalism and looting after police fired pepper spray, tear gas, flash grenades and rubber and wooden bullets into an overwhelmingly peaceful crowd at the Cuyahoga County Justice Center downtown.

Schilling's testimony before Cuyahoga County Council this week revealed that even more of the assertions Chief Williams had made about the protests, many of which Mayor Frank Jackson endorsed in cosigned statements from City Hall, were either partially or fully embellished.

One of Williams' wilder assertions was that protesters had breached the Justice Center the afternoon of May 30. The protesters intended, he claimed — though how he could possibly have known this is unclear — to start fires and release the 1,100 prisoners in the attached county jail.

Schilling clarified that no protesters ever breached the Justice Center.  He also confirmed the accounts of legal observers who'd said that protesters threw plastic water bottles and food at police officers; not, as Calvin Williams had earlier claimed, rocks and bricks and glass bottles and urine.

To their credit, reporters at cleveland.com reviewed hours of surveillance footage to confirm that Williams had lied. But the paper is not coming out and calling the police chief's lies lies. They're presenting the story as one of contradictory interpretations of events, with Schilling and Williams representing two ostensibly valid sides. It's hard to imagine a gentler headline than the one on Thursday's front page, which soft-pedaled Williams' blatant lies by describing a mere appearance of confusion. (Was this meant to be sarcastic?) 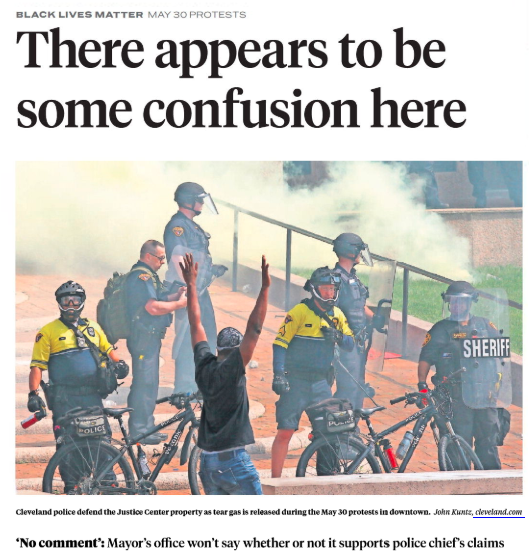 The only substantive addition from Wednesday's front-page story was that Frank Jackson wouldn't say whether or not he supported the Chief's erroneous claims.

That the paper is devoting marquee print space to this issue is good. One can surmise that editor Chris Quinn and co. feel responsible for correcting the record, as they were the ones who ran with Williams' false assertions in the first place. Williams not only fed this malarkey to reporters at press conferences but to the PD/cleveland.com editorial board at a private meeting in the week following the protests.

Quinn was initially skeptical of some of Williams' more transparent lies, e.g. that the looting and vandalism had been instigated by outside agitators. These agitators were not from Cleveland, Williams stated in a press conference; indeed not from the state.  They had traveled from parts unknown to Northeast Ohio to wreak havoc on God-fearing small businesses and to inflict bodily harm upon the region's first responders.

The ensuing arrest of two Pennsylvanians, who could hardly be construed  as instigators — they traveled to Cleveland to "protest watch" after things were well underway — scanned to discerning viewers like the police's attempts to justify Williams' thin geographic claims.

On cleveland.com's news podcast This Week in the CLE, Chris Quinn correctly noted that the "outside agitators" line was being used by police chiefs all across the country. In fact, he recognized, this was a standard line that authority figures always seem to trot out after incidents of unrest — look no further than the Hough Riots! — generally without evidence. As in historic riots, the current claims about outside agitators should be dismissed as nonsense out of hand. And yet, in follow-up episodes, Quinn bought into the narrative of crafty instigators who managed to provoke local opportunists into property destruction and then fled in the dead of night.

On that point and on others, it's important to be clear that Williams has been lying from the start. Cleveland.com's Cory Shaffer has done some of the most important work in the aftermath of the protests because he has demonstrated clearly that the police narrative is false. Williams and Jackson issued a joint statement on May 31, for example, alleging that "police took enforcement actions including the deployment of munitions after multiple orders given by law enforcement to disperse were ignored." (Italics added.)

According to multiple eyewitness accounts, including my own, this was not the case. Far from "ignoring" orders to disperse, no one had any idea that the orders were being given at all. Shaffer's reporting documented the feeble (in fact, illegal) police efforts to broadcast these dispersal orders before officers unleashed their weapons upon the crowd.

The local story, then, should not be that there are two competing versions of events from Saturday, May 30: one from Calvin Williams and one from the County Sheriff. (Some might here recall a relevant journalism meme popularized during the age of Donald Trump.)

Cory Shaffer and others have done the hard work of looking out the window. They have produced a fairly airtight account of the May 30 demonstrations. It should be a no brainer to conclude, based on the solid work of their reporting, that Williams' account is wrong. It takes a bit more intellectual chutzpah, (though it's equally obvious, in my view), to conclude that Williams account is intentionally wrong. That is to say, his lies serve a purpose.

It's not like the honorable police chief is flubbing the odd fact this way and the odd fact that way from a messy day with lots of conflicting information. To the contrary, all of his lies have sought to achieve the same goal: to paint the Justice Center protesters as more dangerous, more violent, and more contemptuous of police authority than they actually were.

Why would he do this?

Well, one recalls that the atmosphere on the night of May 30 and the days that followed was charged with anxiety. Clevelanders were glued to their phone screens watching videos of riots across the country and were eager to believe a composed and trustworthy leader like Williams, he who'd done such commendable work during the RNC.

Insulated both by the chaos and by his reputation, Williams must have felt safe to embellish events. He must have known — and Frank Jackson might have, too — these lies would convince many Clevelanders that 1) police officers had been justified in their extravagant use of force at the Justice Center, and 2) that a militarized curfew was necessary to stem the tide of extremism.