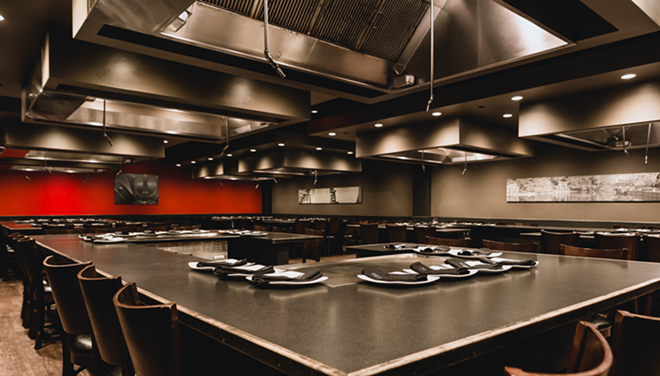 This hibachi saga begins, curiously enough, with a night on the town starring Baseball Hall of Famer Tom Seaver. In the 1970s, Paul Goetz was a sports agent living and working in New York. After a visit with Seaver to a Greenwich Connecticut Benihana, Goetz discovered the second career he was looking for. A couple years later he opened a similar concept in Akron. That restaurant, Hibachi Japan Steak House, was relocated to Cuyahoga Falls (1803 Front St., 330-928-3333) in 1990 and is still going strong.

Now run by son Morgan Yagi, the popular eatery is ready to expand northward. Fittingly, it will open in the former home of another long-running Japanese steak house, Akira, which operated for 20 years in its Solon home. When it opens in the next week or so, Hibachi Japan Steak House (6025 Kruse Dr.) will feature the same name, same concept and same menu as the sister establishment in Cuyahoga Falls.

Yagi recalls that when his dad opened the Akron restaurant in the 1970s, which featured the now-familiar formula of food prepared in front of customers on blazing-hot teppanyaki grills, he was concerned that it might be a flash-in-the-pan fad. Nearly 50 years later, both the restaurant and the style of dining are proving otherwise.

Yagi says that the former Akira restaurant has gone through a “pretty comprehensive remodel,” he reports. “I’d like to think that it looks like a whole different space, one that’s more modernized.”

The sushi bar that long existed on the right side of the space now downplays the “sushi” while promoting the “bar.” The main dining room has 12 hibachi tables that will accommodate approximately 100 guests, fewer than the 180-seat dining room in Cuyahoga Falls.

In addition to the time-honored teppanyaki-fired dinners built around soup, salad, fried rice and a choice of chicken, shrimp, lobster and steak, Hibachi Japan offers sushi in the form of rolls, combination platters and by the piece.

Yagi states that the Cuyahoga Falls location has been doing better than expected despite the Covid crisis and he’s hoping the same will be said of the Solon spot. He highlights the fact that tables are typically occupied by a single large party – or separated from others by plexiglass barriers – and are distanced from the chef thanks to the built-in grill and table. But perhaps more beneficial than all of that, he adds, are the exhaust fans.

“In terms of fresh air and turnover, Japanese steakhouses are about as good as it gets because everyone is facing right into an extraction hood,” he explains.