Levels of segregation in some Cleveland-area public school districts are now as high as they were before Mayor Carl Stokes was elected, according to a report from South Euclid native and academic Beth Fry.

In several inner-ring suburbs, they are even worse.

But unlike the 1960s, this racial segregation is not perpetuated by a system that demands that educational buildings and services are inherently separated. Black families are not barred from attending white schools. The white students are simply leaving the local public system entirely, and at an alarming rate that is impossible to not tie to race.

Cleveland and its inner-ring suburbs have long suffered from the detrimental impacts of “white flight” to outer suburban and rural areas. Systemic and individual-level racism and classism have cast areas that are predominantly Black as less valued and less deserving of investments in high-quality economic, housing, and educational opportunities.

Still, the report, which comes from Fry’s master thesis at Cornell University, indicates that while poor, minority public school districts already face disinvestment due to an unconstitutional funding formula that relies too heavily on property taxes, they also see incredibly high levels of attrition from the white student body. In the city of Cleveland, this white opt-out rate averaged around 70% between 2009-2017. In the East Side suburbs, that rate average was closer to 75%.

“As I was growing up,” the Brush alumna said, “you could see in real time this shift of white people moving out of the community or sending their kids to private schools as more Black students enrolled in the school.”

Fry began to really dig into the shifts in public school attendance through her work several years ago with South Euclid’s Housing Director, Sally Martin. As they dug into the lived experiences of residents, Fry and Martin heard a common narrative that highlighted the value of diversity. But only for some.

As they dug deeper, Fry found a common theme was also apparent: Many, many, many white families were not sending their children to the district schools. Indeed, when Fry set out to research this opt-out issue further as a graduate student, she found the clear and obvious relationship between the loss of white students and the growing number of Black families in the district. The resulting shifts, according to Fry, can clearly be understood as re-segregation.

The rapid rate of resegregation suggests that many white families are choosing to bypass the local public education systems in the inner-ring suburbs entirely. They’re sending their kids to private schools, moving to other suburbs, or sending their kids to schools in other, whiter communities.

The data is damning: Besides Shaker Heights, which has a white opt-out rate of 47%, all other inner-ring east side suburbs have rates higher than 50%. South Euclid-Lyndhurst: 71%. Cleveland Heights-University Heights: 85%.

That’s left east side inner-ring suburbs with an average 78% Black enrollment, compared to 4% for west side inner ring suburbs, 67% for the city of Cleveland, and 47% for outer ring east side suburbs. 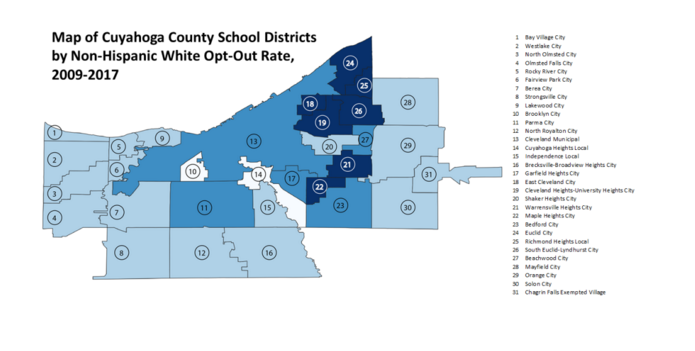 What mechanisms, besides a fear of racial threat, drives white, wealthier families to spend tens of thousands of dollars in private education? State-wide policy efforts that further fuel existing inequities.

The EdChoice voucher program is exactly as helpful as its name suggests. It is guided by a belief that systemic inequities can be resolved through “better” decision making (a claim that has been fully debunked by scholars, activists, and minority groups) and offers a flawed resolution for racist policy making.

The program was adopted in 2005 and intended to provide assistance, in the form of funding, for students in low-rated public districts who wanted to attend private schools. In 2013, it was expanded to include an income-based element allowing even those in high-rated districts to access these funds, should their personal finances make them eligible. But according to a 2016 Fordham Institute report, the students who actually use the vouchers are among the less disadvantaged kids in the eligible school districts.

“This finding may be, in part, an artifact of the program’s basic design,” the report notes, “It allows private schools to retain control over admissions, and a child must gain admission into a private school before he or she can apply for a voucher. This multi-step process might be more easily navigated by relatively more advantaged families; their children might also be more likely to meet the private schools’ admissions requirements.”

Though the program has been controversial since it was established, predominantly Black and poor school districts continue to lose significant amounts of money as vouchers go to students who already exist in a network likely to set them up for middle-class success. Some of these students, like many of those in the East Side suburbs, already planned to attend non-public schools. Others are the already high-achieving, high-capacity students who do currently attend the local public school, but who have the wherewithal and the “acceptability” to be able to transition to a private school education. Many of these students use their vouchers to attend parochial schools, giving credence to those who think the program is a questionable crossing of the line between church and state. And, according to the Fordham report, “the students who use vouchers to attend private schools have fared worse academically compared to their closely matched peers attending public schools.”

Though predominantly Black and brown districts have been up in arms over the EdChoice program for years, last year’s reassessment of school eligibility for vouchers brought new players into the game. When schools in Solon, Avon, Avon Lake, and North Olmsted were added to the list due to a new performance metric, State Senator Matt Dolan (R- Solon) expressed his deep dislike of program’s expansion. Earlier this year, Dolan and other Republicans in Columbus proposed revisions to the EdChoice program, not because of its negative impact on poor and minority districts, but because of their concern that it would negatively impact “successful” districts. In March 2020, one year after the Cleveland Heights local newspaper reported that the local district had lost over 30% of its funding to vouchers, the state cut back the list of eligible schools to protect Dolan’s constituents.

That Solon’s predominantly white school district faced little disinvestment threat, despite its performance concerns, isn’t a surprise considering Fry’s findings. Though Fry’s work didn’t focus on vouchers, “it becomes very clear that the racial diversity is the predictor of what causes the school segregation,” she notes.

Still, the issue goes beyond public-private funding to include public funding mechanisms as well. Ohio’s open enrollment system enables students to attend a district school outside of the one they are zoned for, should both districts agree to allow it. When students attend a public school in a different district, the school they join receives funding in exchange for that attendance.

According to 2018 data from the state department of education, only twelve schools in Cuyahoga County have open enrollment, half of which are in the inner-ring suburbs, including Brooklyn, CH-UH, East Cleveland, Euclid, Garfield Heights and Shaker Heights. Students in these districts who utilize the open enrollment system attend schools in various areas around the county and state, taking much-needed dollars with them. Indeed, state reports highlight deep cuts in funding to these districts in open enrollment adjustments. And these existing concerns related to individual and intra-school funding have only been further exacerbated by the COVID-19 crisis. In May, Governor Mike DeWine announced a series of funding shifts to school districts across the state. Unsurprisingly, areas that were already struggling will see some of the most significant cuts.

Though Fry’s work focuses on the individual family’s decision to opt-out, the systemic nature of this resegregation effort is clear. White, middle and upper-income families in areas that have seen rapid demographic shifts are incentivized to leave their local districts and the racialized fear that the school district will not provide a high-quality education, a talking point that Fry herself had to push back against as a public school attendee.

“It’s about pushing forward the idea that the education is great, the people are great, and you’re in an environment where not everyone is like you, and that in and of itself is an education,” Fry says.

As Fry noted in an interview with a South Euclid publication, “For the past 55 years, research has told us that the greatest predictor of educational achievement is socioeconomic status and parental education level. Only about a third of the achievement gap between white and Black students is explained by school quality and classroom characteristics.”

But as local schools struggle to actually address the social and economic concerns of the remaining students while hemorrhaging funds, systemic racism and disinvestment threaten that greatness, and the calendar is turned back 60 years.

“Cuyahoga County has the fifth highest black-white segregation in the nation,” Fry’s report says. “73% of Greater Cleveland’s black residents would need to move in order for the metropolitan area to achieve integration with whites.”