Two Concepts, a Cafe and 'Bar/Lounge/Kitchen,' to Open on Ground Floor of Harbor Verandas by Rock Hall

For most of his career in and around the hospitality industry, Chris Schramm has played a supporting role as design consultant, lending his sharp eye for detail to projects like the original Lola in Tremont and literally dozens of other high-profile spaces. But for the past year or so he’s quietly been working on a project of his own, one that will place him squarely in the principal position.

His latest canvas is the ground floor of Harbor Verandas (1050 East 9th St.), the luxury apartment building located on the East Ninth Street Pier, just steps from the Rock and Roll Hall of Fame. The 4,000-square-foot space will contain two separate concepts, a coffee shop and "bar/lounge/kitchen." Cute for Coffee will occupy about one third of the ground floor, while Sandrine, the bar, will inhabit the rest.

Schramm says he was motivated to take on such a bold venture because of the site’s unique location and importance to the city’s image, he explains.

“Prior to the pandemic, the area around the Rock Hall sees 1.6 million visitors per year, I think,” he says. “Short of Nuevo [Modern Mexican], which not everybody patronizes, there’s nowhere to get any kind of refreshments.”

Schramm says that routinely he watches families exit the Rock Hall only to wander aimlessly around nearby Voinovich Park before getting back in their cars to head, likely, home. In contrast, cities such as San Francisco, Chicago and New York, Schramm points out, offer tourists a wealth of enticing diversions at bustling sites like Fisherman's Wharf, Navy Pier and South Street Seaport. To upend that narrative, he intends to provide not only places where one can grab a bite and a drink, but visually compelling places in which to do so.

“We’ve got these beautiful structures, right? The stadium, science center, Rock Hall, alright, fantastic, but no real amenities to accompany them,” he states.
“This is a tourist area and I feel like it represents Cleveland. I didn’t want something mundane to present to people; I want this to be like an oasis.”

Cute for Coffee, the smaller of the two spots, will offer quick refreshments like coffee, frozen yogurt and hard-packed ice cream. It is planned for dazzling but efficient service, he reports.

“There’s some limited seating, but it’s designed to be a transitory place with a real high level of visual appeal.”

With respect to Sandrine, he adds, “I would liken it to an upscale hotel lounge, with a lot of sofa seating.” A 14-person bar will be joined by a handful of small tables. The owner anticipates that the food program will expand and contract with the seasons. In colder months, indoor patrons will enjoy bar snacks and finger foods, but come spring, a 45-seat patio will bloom along with a more ambitious menu.

In addition to unparalleled views of the skyline, lake, harbor and Rock Hall, Sandrine boasts one of the shortest commutes to FirstEnergy Stadium.

“Our front looks at the stadium; you can see the Jumbotron and hear the crowds,” Schramm describes. He envisions a sort of high-end tailgate experience starring a stepped-up buffet line – if and when such things are again possible, of course.

There is about two months' worth of work yet to do, he reports, with a projected opening pegged at the end of summer. 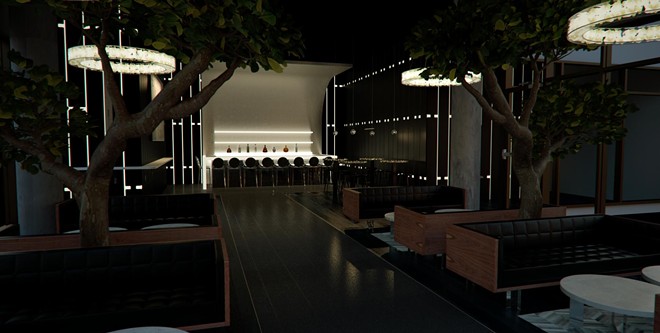