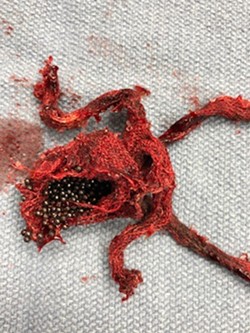 John Sanders, the 24-year-old Sandusky resident and amateur photographer who was shot in the eye with a bean bag round during May 30 protests in Cleveland, posted photos over the weekend of what doctors found when they attempted to save his eye in surgery.

The doctors deemed the damage to Sanders' eye too severe and were forced to remove it. The bean bag round ripped off a portion of Sanders' eyelid as well, and doctors used skin from his neck to repair it.

Sanders had been peacefully demonstrating along with more than 3,000 others in downtown Cleveland when he was shot without warning by an officer he did not see. He had been snapping a photo near the justice center and was walking away from the building and a cloud of tear gas. The round was a bean bag filled with lead pellets.

According to an interview with cleveland.com, Sanders said he immediately lost the ability to see out of his left eye and his face went numb for a few minutes. He was tended to by nearby demonstrators and was soon rushed to the hospital by EMS workers.

This is what was found in my eye pic.twitter.com/Yx0JmRVQgo