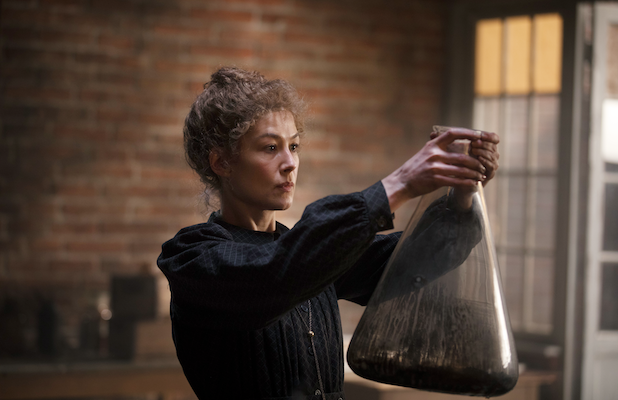 Cleveland, Ohio, makes a brief, unexpected appearance in Marjane Satrapi's Radioactive, the Marie Curie biopic starring Rosamund Pike now streaming on Amazon Prime. Marie and Pierre Curie (Pike and Sam Riley), after years of painstaking laboratory work, have just announced the discovery of two new elements, radium and polonium, in 1898 when then film abruptly cuts to a hospital in Cleveland more than half a century later. A doctor is telling a father that his young boy might be saved by a new machine and its associated treatment: radiation.

It's one of four flashforwards that punctuate the film's key moments, narrative attempts to depict not just Marie Curie's life, but the earth-shattering ramifications of her scientific discoveries. One of them shows the dropping of the atomic bomb on Hiroshima in 1945. Another, during a late, emotional scene, shows the Chernobyl nuclear reactor disaster of 1986.

It's a sporting effort by Satrapi, whose autobiographical animated film Persepolis was nominated for an Academy Award in 2008, to transcend the rigid boundaries of biographical films, but it largely fails. The flashforwards are colorfully designed and filmed, but are mainly just disruptive. Furthermore, they're so stiffly acted that they detract from Pike's commanding lead performance.

Pike notwithstanding, Curie's discoveries are unfortunately just as visually uninteresting as they are groundbreaking. Even for an innovator like Satrapi, it's difficult to organically convey the drama of new science which occurs in beakers and on graph paper over many years, and so characters are constantly expounding upon the exhilaration of their work to remind the audience how important it is. The script, penned by Jack Thorne, in general relies far too heavily on exposition.

But Pike is indeed strong. She plays Curie as headstrong and even impertinent in a scientific community dominated by petulant old men. The title's double entendre refers not only to Curie's scientific work but to her personal life, (about which viewers will presumably know less). Alas, Marie's marriage to Pierre and her affair in the film's second half, which engenders widespread animosity and headlines in the Paris tabloids, are utterly devoid of chemistry.

Much of that has to do with the difficulties inherent in biopics. Like others, Radioactive attempts to stage Curie's entire adult life as a 100-minute feature film. It's not constructed around a single discovery or relationship; rather, it captures a number of important life episodes — marriage, children, Nobel Prize — not unlike a Cliff's Notes volume. This limits the audience's ability to deeply connect with the characters.

Anya Taylor-Joy (Emma.) appears in what feel like the film's final 10 minutes to play Curie's daughter, who's suddenly 18 years old. It's a late-blossoming WWI storyline — securing funding for mobile X-ray units on the battlefield is "the final fight of my life," Curie says — that contains within it the ingredients of a film all its own, a better one than Radioactive, I thought.

Apart from these frustrating constraints, the costumes, lighting and set decoration are all on point. Late 19th and early 20th century Paris are rendered in the dim sepia tones of old photographs, on surfaces both sooty and ornate.