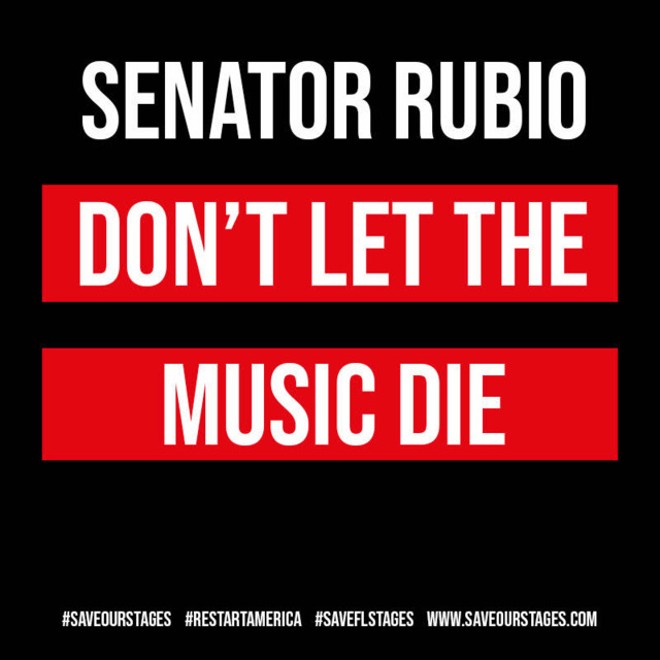 It’s no secret that without federal help, many of Cleveland's beloved independent live music venues will close forever — but there’s a way to help bar venues, theaters, concert halls and listening rooms.

A bipartisan 'Save Our Stages' Senate bill is up for a vote.

Two weeks ago, Sen. Amy Klobuchar, D-Minnesota, and Sen. John Cornyn, R-Texas introduced their co-sponsored "Save Our Stages Act" in the U.S. Senate for voting consideration before the legislative body's upcoming August recess.

The bipartisan bill by this surprising pairing would provide $10 million in funding for six months of short-term economic relief to independent music venues around the country. Aid would be provided to venue operators (and staff, by extension) and promoters.

The problem is that Republican Senator Marco Rubio, Chairman for the Senate Committee on Small Business & Entrepreneurship, needs to hear about it.

So venues and promoters are asking live music supporters to take Thursday, July 30 to write emails (send 'em via saveourstages.com) and post to social media with the following message:

The Save Our Stages Act (S. 4258) is the difference between life and death for shuttered indie music venues, artists, and our ecosystem. PPP will not save us. Senator Rubio, don't let the music die! Make your voice heard TODAY at saveourstages.com #saveourstages

“Without his support this isn't likely to get done,” an email from the National Independent Venue Association (NIVA) says. “This bill will give independent venues and talent reps (agents, managers) the 6-12 (month) funding lifeline they need to survive the pandemic. Without it 90% of venues will close forever!”

Cleveland live music fans can also directly contact Ohio's two senators (Sherrod Brown or Rob Portman) by email or telephone to express your support for the Save Our Stages Act.


The Save Our Stages Act is endorsed by music industry advocacy groups NIVA and the National Independent Talent Organization (NITO).

Music venues were among the very first things to close back in March when the coronavirus pandemic hit the United States, and they will be among the last businesses to reopen when and if the country drastically reduces new infections or a vaccine is developed. Recently, Lollapalooza founder Marc Geiger made the dire prediction that he doesn't even see concerts returning in earnest until 2022.

Some of the particulars of Save Our Stages economic aid package to venues include:


The introduction of this bill follows months of lobbying by NIVA, scores of prominent musicians, and even corporations like Spotify and YouTube, all touting the economic value of independent venues, which foster thriving music scenes and touring ecosystems around the country.

In addition to the Save Our Stages Act, NIVA also supports the RESTART Act.

“The warning light is flashing red and our only hope is for legislation like Save Our Stages Act or RESTART Act to be passed before Congress goes on August recess," says Dayna Frank, president of NIVA and CEO of First Avenue Productions. "Otherwise, most businesses in this industry will collapse."

The letter, which you can read in full here, says:

Under normal circumstances, these mom-and-pop entrepreneurial businesses fuel about $9 billion a year into local economies throughout the U.S. Due to the national routing of most tours, this industry will not recover until the entire country is open at 100% capacity. NIVA members need assistance in order to survive until that day. This relief is critical for our nation’s artists, too, as they derive 75% of their income from touring. They will need a place to play — and not in boarded-up buildings — when the world opens up again. These independent venues are the unassuming, unsung heroes of the music industry where developing artists get their start, hone their craft, and build a following. Without these venues, there are no arena acts or major festivals and the music economy will be in further peril.

Before it’s too late, Congress must take quick and specific action to address the unique circumstances of this still-shuttered component of the small business sector. We are asking you to support NIVA’s request for assistance so these venues can live long enough to reopen when it’s safe — and once again serve as the economic engines that fuel local economies.