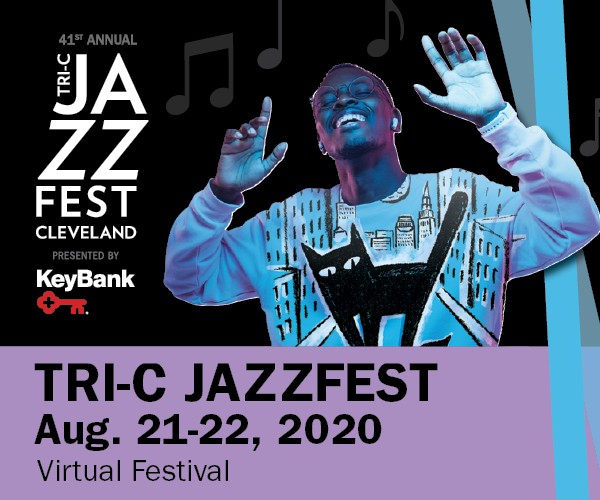 Update: Cuyahoga Community College has just announced that it's added a third day of music to the virtual edition of the 41st annual Tri-C JazzFest Cleveland slated to take place later this month.

Originally planned to last for two days, livestreamed performances will now take place from Friday, Aug. 21, through Sunday, Aug. 23. The free virtual festival will begin at 7 each night and run approximately 90 minutes.

“Those of us who were there — from the technical crew and stagehands to the musicians themselves — were excited to be in the presence of live music again,” says Terri Pontremoli, the festival’s director, in a press release, with regard to taping performances. “We’re looking forward to sharing these performances with the world.”

In addition to the pre-recorded sessions, the virtual festival will feature live performances by artists as well as drop-in interviews with international jazz icons as well as footage of memorable moments from past Tri-C JazzFests.

Previous Post 1/31/2020: Earlier today, Tri-C announced the lineup for its virtual edition of the 41st annual Tri-C JazzFest Cleveland, which takes place at 7 p.m. on Friday, Aug. 21 and Saturday, Aug. 22.

The virtual festival will feature pre-recorded and live performances by the artists as well as drop-in interviews with jazz icons and footage of memorable moments from past Tri-C JazzFests.

“This virtual festival will share the compelling story of Tri-C JazzFest with music fans across the world,” says Terri Pontremoli, the festival’s director in a press release. “Once they hear these artists, they’re going to know what jazz in Cleveland is all about.”

In addition to performing, Farinacci will co-host the virtual festival with Pontremoli.

Previous Post 4/22/2020: Earlier today, Tri-C announced that this year's JazzFest, which was slated to take place in June, has been cancelled.

"Too many unknowns regarding the spread of the virus, and when it may subside enough for the state to lift restrictions on large-group activities, forced the decision," reads a press release.

In its place, Tri-C plans to present a virtual concert featuring local musicians.

"Artists would be paid for participation in the event," reads the press release. "providing welcome income during a time when most have lost paying gigs."

“We see this as an opportunity to showcase Cleveland’s best while giving jazz fans everywhere a special treat,” says Terri Pontremoli, director of Tri-C JazzFest, in a statement. “You can’t beat the experience of live music in crowded concert halls and clubs, but this is another way to sustain musicians and feed the souls of our audience.”

Refunds will be offered for those who purchased advance festival passes. Individual tickets had yet to go on sale.

Original Post 1/31/2020: A jazz drummer and hip-hop producer, Karriem Riggins will be the artist-in-residence for the 41st annual Tri-C JazzFest Cleveland. The festival takes place at Playhouse Square in June.

Riggins’ residency will begin next month and will include performances, master classes and interviews.

“We’re excited to immerse Karriem in our community,” says Terri Pontremoli, director of Tri-C JazzFest, in a statement. “He does more than straddle the worlds of jazz and hip-hop — he brings them together.”

Riggins will be introduced as Tri-C JazzFest’s artist-in-residence on Friday, Feb. 7, during the 2020 festival lineup announcement party at Nighttown.

He’ll return to Cleveland in April and June for workshops and a performance at the festival itself.