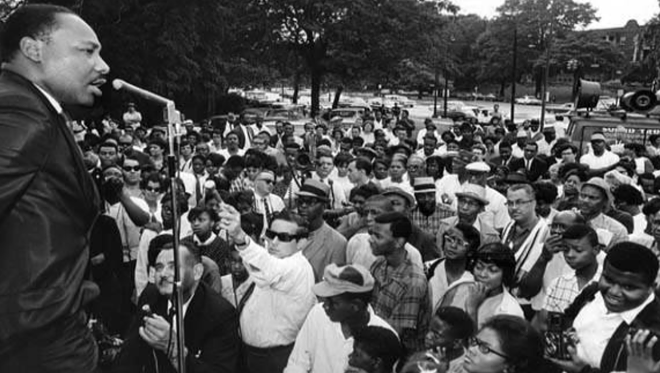 The Cleveland Restoration Society last year received a $50,000 grant from the National Park Service to develop a Civil Rights Trail in Cleveland.

The project, which is expected to take three years to complete, will identify and memorialize ten sites in Cleveland associated with the civil rights struggle of African-Americans between 1954 and 1976

"The struggle for civil rights continues today, as many Americans face inequities in housing, education and the criminal justice system," the CRS says on its site. "By marking sites in Cleveland where events took place which were pivotal to changes in federal legislation and Black empowerment, our community will honor the courage and steadfastness of our those who brought about this legislative and social progress."

In pursuit of narrowing down the options to ten spots, the Cleveland Restoration Society is offering a survey to collect input.

Among the many options presented: The site of a white riot in Little Italy in 1964 to protest the busing of students; the first 'straw buy' house in Cleveland, which was purchased by a white couple for a black couple to avoid racially discriminatory housing restrictions; the Sidaway Bridge, which separated Kinsman from Slavic Village and became a flashpoint during the Hough Riots; the home where Carl Stokes lived while he served as Cleveland's mayor; and the former location of Haggins Realty Office in Cleveland Heights, the first African-American owned realty company in Cleveland that served Blacks when white realtors refused to deal with them; among others.