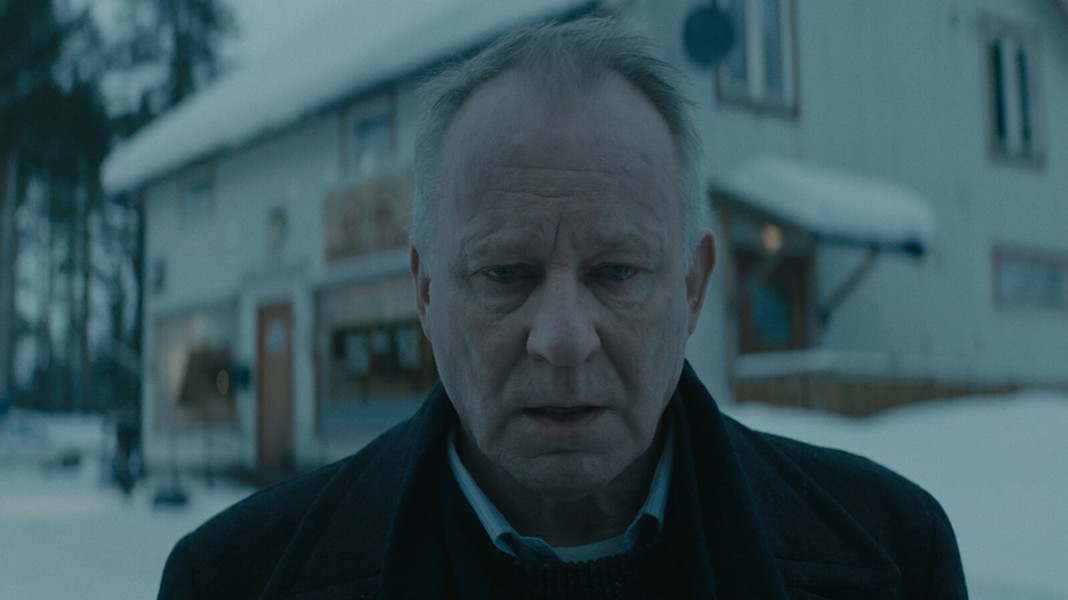 Per Petterson's 2003 Nordic bestseller Out Stealing Horses was widely read and feverishly acclaimed, the sort of novel that was set out for months in prominent displays among the latest literary blockbusters at both indie and mainstream bookstores.

Set in remote Norway in 1999, the film centers on the life and memories of an elderly man named Trond (Stellan Skarsgard). Early in the film, he has a chance encounter with a neighbor whom he recognizes as a young boy who'd been involved in a freak tragic accident decades earlier, back when Trond was a teenager staying with his father at a cabin in the woods north of Oslo.

The modern Trond, then, passes his snowy days in and out of extended reflections on the tumult of his young life. Via voice over and flashback, the film recreates the summer in the late 1940s during which the tragedy occurred, and presents a set of familiar coming-of-age tropes and preoccupations — sexual obsession with an older women, the evolving bond between father and son, the internal turf war between freedom and responsibility — in the context of Norway's natural beauty and the residual anxieties of World War II.

For a story as concerned with a single character's interior life, an expressive actor is necessary to communicate the depth and range of emotion without a ton of dialogue to work with. Skarsgard is adept at conveying much — grief, regret, whimsy — with subtle movements of his eyes. And the young Trond (Jon Ranes) has both buoyant energy and a kind of flinty volatility that explodes in a couple of emotional scenes when he's observing others.

But the film's biggest star is the natural world that cinematographers Thomas Hardmeier and Rasmus Videbaek capture lovingly and at extended length. The film was shot in both rural Norway and in Lithuania, and there's grandeur and elegance in the raging storms and blowing trees of the woods and countryside, even if the film's two-plus hour runtime can sometimes feel a tad drawn out.

The texture of these images might make some viewers long for the rich texture of the prose that created such a memorable, fraught cast of characters. Moland himself adapted the novel as a script, and while it effectively hops back and forth through time, the introspection of the film's present moment sometimes drains it of energy. Moreover, the structure of the film, in which the tragic incident is portrayed very early on, lends some of the film's second half a sense of meandering anticlimax.

Moland directed last year's Cold Pursuit, a white father revenge thriller with traces of dark comedy starring that genre's progenitor and marquee star, Liam Neeson. It was bad. It also happened to be a remake of Moland's own 2014 Norwegian film In Order of Disappearance, also starring Skarsgard, which was probably much better. Moland clearly understands the visual power of setting. The remote Alaskan community overwhelmed with snow in Cold Pursuit was one of its few highlights.