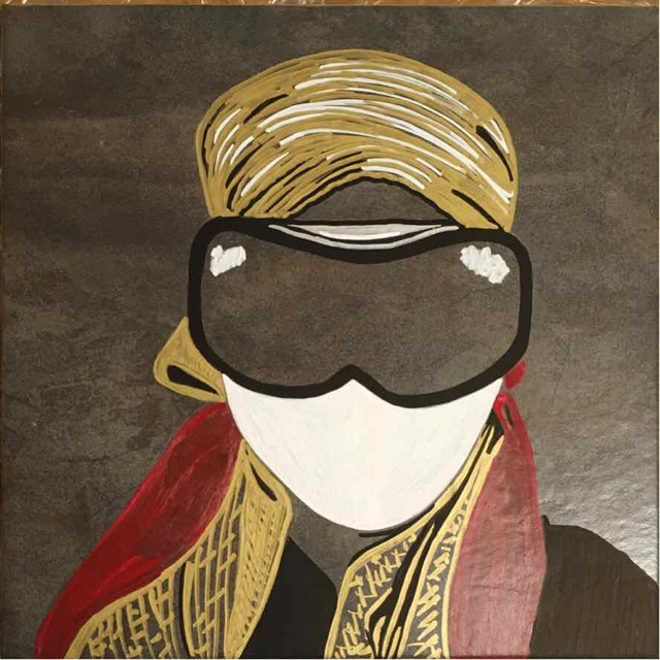 This latest body of work was inspired by a series of Zoom meetings while in quarantine and by her reconnection with nature on long walks in the park. I spoke with Kassoff about the exhibition to get a deeper understanding of how the show manifested.

As we communicate more and more on video chat instead of in person, it has become the norm to see our friends, families and coworkers confined to the boarders of our computer screens. People become ‘framed’ in our psyche as in portraiture, so it made sense to Kassoff to use this day-to-day ‘framing’ and to pull this into her vison as an artist.

“A friend asked me if I could use some ceramic tiles for an art project. I immediately said “yes,”" she told me. "During this pandemic, I’ve been on a variety of meetings via Zoom and Google Meet. The idea came to me that I could depict the people I saw on the screen, each portrait represented on a square tile. Then these could be exhibited together as a reflection of how we communicate during the shutdown…I took screen shots of people on Zoom with permission from each person…I sketched a simple line drawing of each person on a 12" x 12" ceramic tile. I used paint markers to outline and to draw contour lines. I found the perfect sized wooden square box frames on which to adhere each tile.”

People seem to be taking advantage of their time away from work to reconnect with our beautiful and expanding park systems and reservations in Northeastern Ohio, and Kassoff found a way to bring nature into this latest series, “I made another set of tiles depicting nature, flowers and trees. During the shutdown, I spent more time walking in the parks, as did many other people. That’s how I got the idea to include a set of nature tiles."

One piece is a large set of tiles coming together like a mosaic to form the image of a birch tree, which Kassoff laid out and painted on a set of 12 slate tiles to form the backdrop for the image of the white tree.

“I took a walk at Acacia Metroparks, across the street from where I live, to take photos of one or two birch trees. I decided to paint the birch tree so that the 12 tiles, three across by four down, would fit together as a composite of a birch tree. I used white alcohol-based ink to paint with on the dark tiles. I liked the idea of painting in the reverse, with white on black.”

I asked Kassoff how being a teacher has influenced her artwork.

“For me, it is the other way around," she said. "As an artist, I want to be able to teach others how to creatively express themselves visually. I hope the viewer will be able to recognize that even during these uncertain times, the gift of creation and beauty still exist. I would like my artwork to shine and to bring a sense of light during these dark times.”