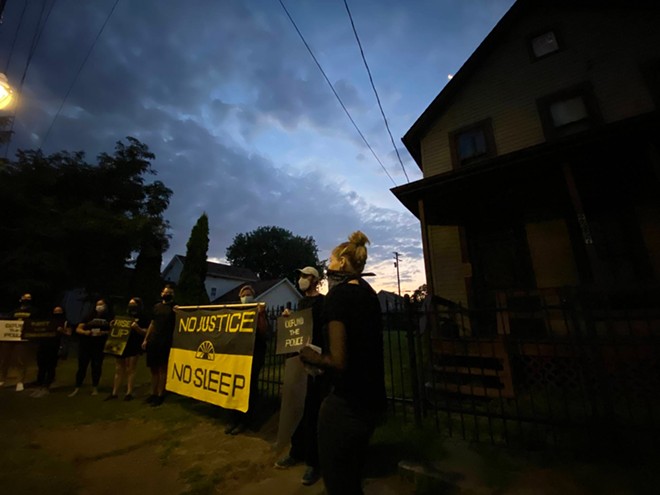 The 6 a.m. action, dubbed "Wake Up, Mayor Jackson" was intended, organizers said, to put the Mayor "on notice."

"Jackson is sleeping through the many crises we are facing in this moment," an announcement sent to the media read. "In an unprecedented moment of the COVID-19 pandemic, economic collapse, racial justice uprisings, and impending climate catastrophe, he condemns calls to defund police, allows horrid conditions in local jails to continue, and remains intent to maintain the status quo. We’re calling on Mayor Jackson to invest in our community. Now is not the time for incrementalism or promises of future change. We demand the future we need, not the future we think we can negotiate for."

The youth, who are affiliated with the local chapter of the Sunrise Movement and other organizations, said the pre-sunrise timing was intentional, a callback to “Wide Awake” abolitionist actions of the 1800s in which young people would congregate outside politicians’ homes at inconvenient times to force them to confront their inaction on injustice. "No Justice, No Sleep," was the most prominent slogan in use Friday.

Organizer Jacie Jones told Scene after the demonstration that there was a "strong" police presence outside the Mayor's house, but that youth chanted and sang and gave prepared remarks for about half an hour before dispersing.

"Jackson is asleep at the wheel," Jones said. "We're demanding that he stand with us and organizations like Black Lives Matter in defunding the police and investing in our community. As young people who have grown into a world seemingly always in crisis, we know we need radical, justice-centered change. And we need leaders who support that vision."

Jackson did not respond to the protesters.