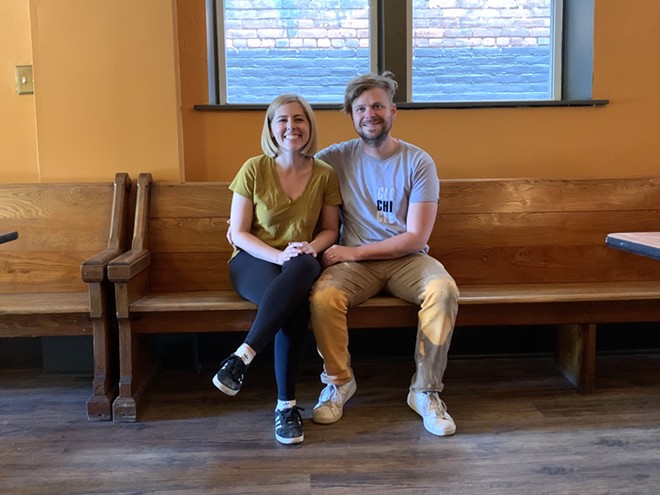 See original story about the owners and the restaurant below.

Victor Morenz admits that it is “the weirdest time possible” to be opening a restaurant, but that’s precisely where he and wife Emily Gilbert presently find themselves. The two are just weeks away from unveiling Home Bistro in Little Italy. The restaurant is a revival, of sorts, of a Chicago spot of the same name that they owned for five years but worked at for nearly 10. They closed the restaurant to return to Cleveland, Morenz’ hometown.

Since January, they have been working to ready the restaurant’s new home, the former Gusto and Porcelli’s space on Mayfield Road. For years, the space had sat idle save for a few days a year during the Feast.

The two-roomed space has capacity for 85 guests in the dining room and separate barroom, although that number will likely be cut in half thanks to social distancing. A rear patio offers additional seating.

With help from family, the couple has installed new flooring throughout, built a bar, installed new light fixtures and rebuilt the restrooms. While the work is largely cosmetic, the efforts have gone a long way to restoring the old-world character of the 100-year-old tin-ceilinged space. One of the final hurdles is the completion of a storefront renovation project that is swapping brick with glass.

Morenz describes his cooking as New American, with seasonal, ingredient-driven fare with roots in American, Italian and even Dutch cooking. But it was much more than the food that attracted so many diners to Chicago's Home Bistro for so many years, the chef says.

“When you go to a restaurant, it’s a given that the food should be good,” explains Morenz. “But what makes a difference is how you’re treated and how you feel while you’re there. That’s where the ‘home’ aspect comes in. Hospitality is the key word.”

The experience he describes was bustling and communal, a quality he hopes Cleveland restaurants can return to soon.

“At our little bistro in Chicago, we packed them in,” he states. “We encouraged people to get friendly with the people next to them. It’s something that really contributed to who we were and why people loved us. Hopefully we’ll get back to that here at some point.”

Management has set a deadline of August 1 to open the doors, but that could happen sooner depending on progress. When it does happen, Little Italy will increase its restaurant population by one, complementing the already-rich tapestry of eclectic eateries.

“People that live in the neighborhood or come to the neighborhood all the time, they love Little Italy,” says the chef. “They’ve been going to the same places forever and they’re happy to see something new come in. But it’s important to remember that just because there’s something new, doesn’t mean that anything happens to the classic places. I love the classic places. I love Little Italy as it is. I like it so much that I want to have my restaurant here.”

It was recently announced that the annual Feast of the Assumption will not take place in its usual form, a blow to the neighborhood at large and to Home Bistro as well. But that’s the world as it currently exists, which is something that Morenz and Gilbert will have to deal with when they open the doors.

“Sometimes I wish that I had opened just before this all happened, because then I would be in a situation where I could adapt to what was going on and then work our way through it,” Morenz explains. “It’s almost like, through this whole thing, the anxiety of it all builds a little bit more and more. Whereas, if we were already in it, then you just roll with it because that’s the business we’re in anyway.”

When it opens this summer, Home Bistro will serve dinner and (probably) weekend brunch.