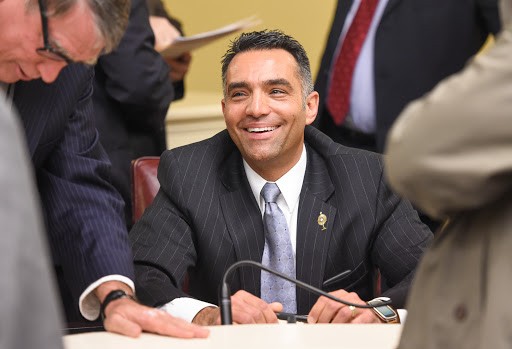 The committee is accused of failing to file a “full, true, and itemized statement” detailing contributions and expenditures, the referral states. The committee also reportedly failed “to deposit all monetary contributions received by the committee into an account separate from a personal or business account.”

The blank report filed on June 6, 2020 failed to report activity despite, according to the referral, “the committee’s active campaigning, fundraising efforts, and use of services (such as the committee’s email marketing service, Mailchimp) that charge monthly fees.”

The referral also states Vitale’s committee bought Facebook video advertisements without reporting the money spent as expenditures. The committee paid for three videos in 2019, each at a cost of less than $100.

Vitale is also accused of using his campaign resources to benefit his personal work of teaching firearms training. The Ohio Capital Journal had highlighted the candidate’s unusual campaign finance activity in a story last month.

The Ohio Capital Journal reported that Vitale used his campaign donation portal as a means to benefit his CCW training business. Vitale teaches classes for $100 per person, and throughout the summer has encouraged participants to pay by donating to his campaign committee.

However, Vitale wrote in the event description: “This is NOT a campaign contribution, so if you go through the (donation page), you will not be donating to the campaign, although it says you will. We just use that as a means for people to have alternative methods of instant payment to hold your seat for the class.”

The registration form also read: “We use my political sight (sic) to receive the money but it will not be considered a political donation.”

After the July 28 story published, Vitale defended the practice on his Facebook page. He said his actions had “been cleared by the Ohio Ethics Commission and I check off with them on what I am doing almost every time. All legal.”

Vitale posted another defense on Facebook Thursday morning. He claimed again that ethics officials had approved his use of campaign site and Facebook page in connection to his private CCW training classes.

“Now, seven years later, these are flagged as a problem,” he wrote.

Vitale said he would “provide whatever information is necessary” to investigators to “show that I have been above board and transparent about all activities, income and expenses my campaign has had.”

Candidates are allowed to solicit donations by selling private goods and services, but such events are traditionally advertised as political fundraisers — with money given to candidates for the purpose of being political donations. Vitale’s CCW training classes differ in that he explicitly tells participants the money submitted through his campaign site are “NOT” meant to be campaign contributions.

The Dayton Daily News, which first reported the Vitale campaign finance investigation earlier Wednesday, quotes Ohio Elections Commission Director Phil Richter as saying the complaint will not be considered until later this year after the General Election.

Vitale is campaigning unopposed on the ballot for his fourth and final term representing the 85th District, which covers Campaign, Logan and Shelby counties in western Ohio. A write-in candidate named Ted Greek has filed for the seat.

Vitale speculated to the Dayton Daily News this investigation is political payback for him having joined an impeachment effort against Gov. Mike DeWine earlier this week.