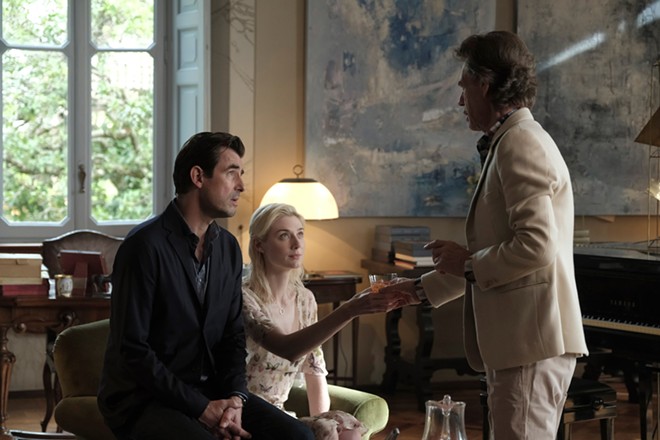 The Burnt Orange Heresy, directed by Giuseppe Capotondi (The Double Hour) is an art world drama that so effectively creates an atmosphere of dread and mistrust that it often feels like a horror.

The rakish Dane Claes Bang (The Square) plays James Figueras, a minor figure in the world of art criticism. As a young man, he'd been a curator on the rise, but a scandal doomed his career. Elizabeth Debicki is Berenice, a small-town American vacationing in Europe for reasons unspecified at the outset, who, after a one-night stand with Figueras, joins him at the estate of eccentric philanthropist Joseph Cassidy (Mick Jagger), where a reclusive painter, Jerome Demby (Donald Sutherland) has been holed up, working in secrecy for years.

Figueras thinks he'll be commissioned to write a catalog on Cassidy's private collection for eventual auction, but Cassidy has other ideas. He wants to stage an exclusive interview between Figueras and Demby about the artists's new work, which Cassidy swears will rejuvenate Figueras' career. And there's an additional motive: Cassidy wants Figueras to steal one of Demby's new paintings, and threatens to expose another scandal if Figueras refuses to comply.

Set on the lush grounds and dimly lit terraces of Cassidy's Italian manor, and accompanied by a high-tension orchestral score, the mood is not one of elegance and glamour but of constant suspicion and menace. Even the merry Demby has a pivotal secret that, when revealed, sends Figueras' secret mission off the rails.

The film's stakes, while individualized, are always extremely high: a career might be made or broken. A legacy might be tarnished or enlarged. One's history, ones' true nature, might be exposed for the world to see. The four leading characters, even the jaunty Jagger, are well-cast, each of them feinting and bargaining as they wrestle their own demons and play their own games.

The verdict? Burnt Orange Heresy is a well-executed drama. It's not a transcendent film, but its pieces and parts — the performances, the adapted screenplay, the lighting — work in concert to convey an affecting moral tale. It's currently playing at the Atlas Cinemas in Mentor and is now available for rental on streaming platforms.