From the Scene Vault: 'Euclid Beach Band; Look Out, Surf’s Up' 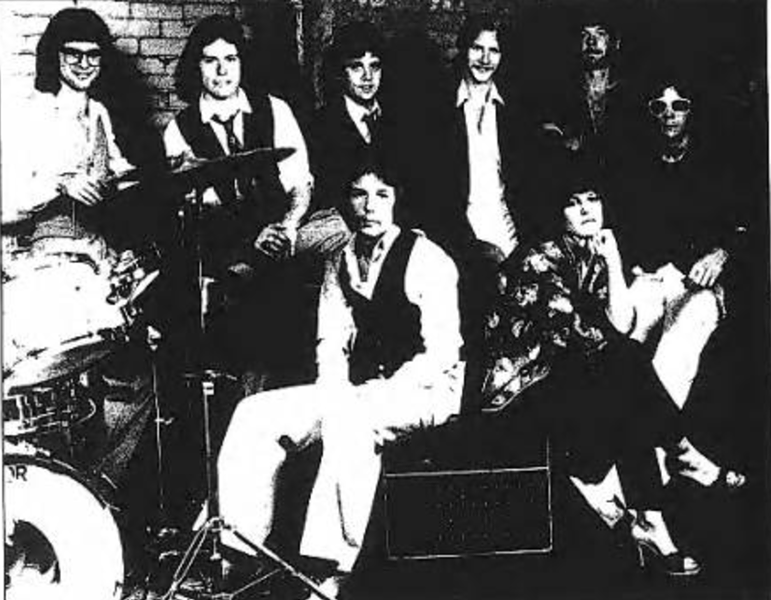 This story was originally published in Scene in the September 13th, 1979 issue and was written by Keith Rathburn about the Euclid Beach Band just a year after their single, which was put out on Scene's short-lived record label, made waves.

There's no surf in Cleveland, Ohio; but there's quite a mounting wave of popularity surrounding the Euclid Beach Band. EBB first gained attention more than a year ago with its Beach Boys' parody, "There's No Surf In Cleveland" and scattered area dates during which the band staged a show around the surf music theme. That was fun; now the Euclid Beach Band has out a self-titled debut album and begin a series of showcase live appearances this Saturday (Sept. 15). Now the Euclid Beach Band sincerely means business.


Actually, the Euclid Beach Band is an outfit of veteran musicians that share a wealth of previous recording and touring experience. It's surprising that many Clevelanders know little about the band's makeup; EBB's component parts have been regarded among our town's most prominent musicians since the early-to-mid Seventies. EBB's central figures are Richard Reising and Peter Hewlett. The former played in two of Cleveland's most popular bands, Marvin Gardens and Magic (the latter band became the basis for the first post-Raspberries Eric Carmen Band). Hewlett enjoyed great success with a Pittsburgh band, Sweet Lightning. Hewlett's band recorded one RCA album and Hewlett later recorded a solo LP for the same label before migrating to Cleveland to front the popular Windfall.

Reising and Hewlett became good friends when they were both recruited by Eric Carmen to go to England and record with Carmen on his first solo album, BOATS AGAINST THE CURRENT. While Reising continued on with Carmen's band and toured the states, Hewlett returned to his native Pittsburgh. But, the two kept in contact and Reising asked Hewlett to lend his vocal support to two songs that Reising was working demos on. These demos proved to be the basis for the Euclid Beach Band.

Granted, "No Surf" garnered the band its most attention. However, the older demos earned the Euclid Beach Band its recording contract with Cleveland International Records.

"When we were first approached by Cleveland International," Reising told SCENE, "I brought them these demos and they were immediately attracted to Pete's voice. There was this sound that we had —Pete is definitely one of those guys with a unique voice—and it was that sound rather than 'No Surf' that Cleveland International bought."

Hewlett's participation was minimal during the "No Surf" period. He sang on the choruses and appeared only at the band's Agora appearance. Hewlett is quick to state the differences between the band as it is now constituted and then."The band is so much stronger now," he said. "And we should be far more accepted by a bigger audience. The 'No Surf' show was fun, but this is a whole new band and concept and should be able to gain acceptance on its own merit."

Immediately after being signed by Cleveland International Records' President Steve Popovich, the Euclid Beach Band—then only consisting of Reising and Hewlett—made plans for the first album. Because of familiarity and compatibility. Cleveland's Eric Carmen was the obvious choice for producer and the trio took off for New York City's Mediasound Studios. Carmen and the band reached an immediate understanding.

"I knew what my songs were like," explained Reising, "and what I wanted them to be like. I learned a lot about Eric during the BOATS sessions in England. Knowing what his tastes were, I was comfortable in the thought that he would be able to take my songs and ideas and improve on them."

That sound that Cleveland International had bought was magnified on EUCLID BEACH BAND. The LP boasts an excitingly fresh pop sound with influences equally provided by Reising and Hewlett. The album is genuine pop with an ear-pleasing R&B overtone.

"I think what it boils down to,” said Reising, "and I didn't even notice this until I started doing more and more with Pete, is that the album's songs more or less display the differences between Pittsburgh and Cleveland.

"When I was younger and going to see the Cleveland bands, the most popular bands were those doing the English- type pop. It seems that Pittsburgh has always tended to be more towards Motown and R&B. So Pete's tendencies lean in that direction, while mine are more straight forward pop." “It's no accident that the band will come off different live than they are on the album - we want to be a rock band.”

Hewlett attempted to capture Reising's pop tendencies when singing the songs. "Vocally," Pete explained, "I felt that I pretty much stylized my voice towards what Rich's songs demanded. I sang more pop than what I usually do, but at times the R&B comes through." It's that combination that provides the album with such a refreshing pop sound.

However, both Reising and Hewlett were a bit disappointed that the album was lighter in sound than they had intended. They attribute this to the fact that the backing was predominated by session musicians and made this their major consideration when assembling the touring EBB. Thus, both Reising and Hewlett are eagerly anticipating the live shows which begin Saturday (Sept. 15) at Geauga Lake Park and Sunday (Sept. 16) at the Cleveland Agora.

The EBB touring band was carefully assembled. "We certainly needed a calibre of musicianship—especially in the rhythm section—just to pull off the stuff the session musicians did in the studio," Reising explained. "But, I'm much more comfortable with the band now than I was with the session men and I would use these guys in the studio the next time. Studio guys are great and you certainly learn a lot from playing with them. But some give their all and some do it just like it's nothing more than their job—which it really is so you can't fault them.

"But I would much rather have somebody that is putting much more of themselves into it. A little heart and feeling goes far. So, we went after people like that who could perform that way live. We wanted people who would be in the band because they really wanted to be doing it and would, thus, be dedicated. And that's what we have live."

Hewlett was quick to agree with Reising: "I really wish the album had turned out the way the live band is turning out. It'll make a big difference in the way the band will be accepted. We aren't as 'lightweight' live as the album sounds."

After forming the live band, Reising and Hewlett afforded the same concern in developing the stage presentation. And indeed they feel that they've succeeded. The LP's material will be much rockier and the cover tunes have been carefully chosen.

"Live, the songs and the band is much stronger," Hewlett said. "I never doubted the songs' values—they really hold up. But, we're doing so much more justice to the songs the way we're doing them live. I'll definitely be able to open up much more.

"It's no accident that the band will come off different live than they are on the album; we want to be a rock band and that had a lot to do with the musicians we selected and the songs that we chose to do—"Route 66" and "Dancin' In The Street" —which are powerful tunes. And the show itself is really diverse, and should prove to be extremely interesting."

Naturally, being from Cleveland, this area is the band's strongest market. But, EBB is also making waves in other areas; "I Need You" was a huge success in Atlanta and the LP is receiving good airplay in other cities too. Some people believe that because of Cleveland's reputation as a music capital that EBB can't miss. But, several other qualified musicians and bands have had difficulty breaking from this market; many extremely competent Cleveland bands have had trouble gaining deserved national recognition. Wisely, EBB isn't banking on Cleveland alone making them a success; they know it will take dedication and their own hard work.

"I don't think that being from Cleveland," opined Reising, "should be considered either a plus or a minus. It's the band that has to prove itself and we can." "The songs are strong enough and with our work they should be accepted," added Hewlett. "So, it shouldn't really matter where we're from." While Euclid Beach Band is a rookie outfit, the band has veteran influences and they know what it takes to ride the wave of success. They've already made an impression on Cleveland and the upcoming weeks and many live appearances should stir the waters and provide momentum to carry them on to other cities.

Look out world, surf's up for the Euclid Beach Band.