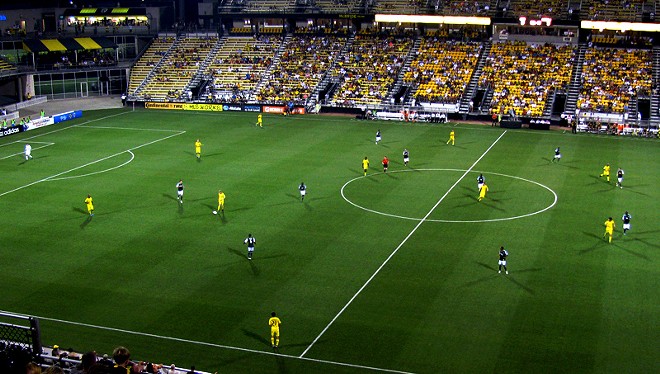 In defiance of recommendations from the Columbus Department of Health, Major League Soccer's Columbus Crew will allow 1,500 fans into Mapfre Stadium Sunday to watch their game against FC Cincinnati. The in-state rivalry was branded the "Hell is Real" Derby last year, named for the ominous sign on I-71 between Ohio's largest and third-largest cities.

The Columbus Dispatch reported that the 1,500 tickets will be given to season-ticket holders based on seniority, and that all spectators will be required to wear masks and maintain social distancing.

On the precipice of the Ohio high school football season, Gov. Mike DeWine, issued an order in conjunction with the state's health department that allowed school athletics program to seat either 1,500 fans or 15 percent of an outdoor venue's total capacity, whichever was lowest. (For indoor venues, the threshold was 300 fans.) The purpose of the order was to allow families and loved ones to attend sporting events, DeWine said.

The Crew's Mapfre Stadium has a capacity of 19,968, and Crew President and General Manager Tim Bezbatchenko said in a statement that the seating layout had been designed to ensure social distancing.

"The health and safety of all individuals entering the building remains our top priority to ensure a safe continuation of the 2020 MLS season," he said.