by Paige Bennett, The Land 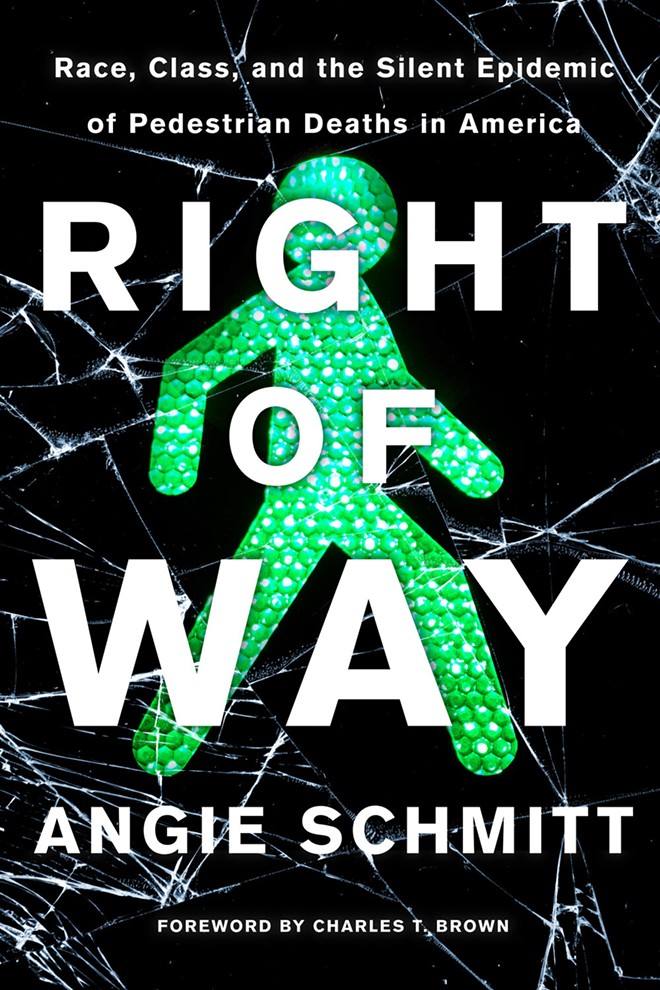 In 2018, a pedestrian was killed in a traffic crash in the United States every 84 minutes on average, according to the National Highway Traffic Safety Administration. Thousands of pedestrians die every year in traffic accidents, and the issue of pedestrian safety has grown significantly in the last decade.

In her new book, “Right of Way: Race, Class, and the Silent Epidemic of Pedestrian Deaths in America,” Cleveland-based writer and sustainable transportation expert Angie Schmitt investigates factors that led to the pedestrian safety crisis. She examines the way road design, vehicle trends and racial inequality have contributed to pedestrian deaths in the United States.

The Land recently caught up with Schmitt to discuss pedestrian safety on streets in Northeast Ohio.

Congrats on the new book. How does it feel to be a published author? Can you still sign copies in a pandemic?

So I completed the book about six months ago. It feels good to see it in print and hear from people who read it and enjoyed it, even though there's so much going on news wise. I know Macs Backs on Coventry has ordered a bunch and I am going to go up there and sign them, but unfortunately I had to cancel the book release party I had planned because of corona. (A lot of times that's where you would get a signed copy.)

You write in “Right of Way” that road design — including width, speed and lack of pedestrian infrastructure like crosswalks — is the biggest determinant of safety. In Cleveland, what are some of the least safe roads and what can we do about them?

This is a very localized problem so addressing it starts with going out and looking at specific locations and talking to folks in the neighborhood about what the issues are. But things like retiming "Walk Signals" or adding mid-block crosswalks or adding medians can be helpful.

Cleveland has added bike lanes, but you make the argument that bike lanes are often added in gentrified areas with higher white populations, so they don’t necessarily contribute to pedestrian safety where it’s needed most — in low-income and minority communities. What progress is the city making in trying to fix this problem?

Cleveland has made some progress on bike friendliness and some people have worked very hard on that. I was involved with it for a while. The bike infrastructure in Cleveland is definitely near west side heavy at this point I would say. There are some exceptions, though. One of the projects Cleveland's done that I like the most doesn't include bike lanes. It's Clark Avenue and more recently Fulton, where a good effort was made to improve pedestrian crossings with paint and signs, etc. I would love to look at the data about the impact that has had but I don't know of any right now.

I know University Circle Inc. has been making good efforts to improve streets in their area as well.

But we still see deaths on streets like Carnegie and Superior. Those streets are very, very wide. Carnegie goes right past public housing but the road design is just all about racing people through the neighborhoods to the Cleveland Clinic. After one of the deaths this year, a neighbor said it was predictable and that people use the street for drag racing, so we still have serious problem areas. Streets like East 55th and West 117th.

But one thing I will say in Cleveland's defense is that it has limited money and regional and state transportation funding has flowed disproportionately to sprawling suburban areas for things like road widenings outside of Walmarts. That's still what the state wants to fund.

Is the increasing rate of poverty in our suburbs leading to more pedestrian deaths in these communities, which often have wider roads — suburban arterials — than the city and inner suburbs? What’s being done about it?

I haven't looked at the data from suburbs locally but that is a national trend. Many suburbs are extremely hostile to pedestrians. I don't know that there are many suburbs anywhere that have been super proactive about this — a few wealthier ones actually have, I should say. You drive out to like Brookpark Road and it is just horrendous for pedestrians. It would be helpful if the state and federal government were being really proactive about it but unfortunately, they are not.

The redesign of roads in New York City led to lower pedestrian deaths. Some of these interventions were done cheaply. Are there any examples of cities or roadway designs in Northeast Ohio that are leading the way?

The City of Cleveland got a federal grant to make some changes to Clifton Boulevard a few years ago and those are in place now. They added landscaped pedestrian islands and mid-block crosswalks with flashing signs. They also added a bus lane (it is only in place during rush hour). Those are all treatments I like. Clifton was (is?) a very, very dangerous road. I don't know if people remember the "flower guy" that used to stand every day at 117th and Clifton but he was killed there a while back. And there were a couple other people who were killed by a drunk driver a few years ago just standing by the roadway attending an AIDS fundraiser. So that was a really nice project, I think. One thing that's really frustrating is the Mayor of Lakewood at the time refused the funding to continue it into Lakewood, presumably not to anger drivers. I think that was really a shame. This project wasn't very cheap though, I have to say, but at least 50 percent of the money came from the feds. I also really like what the city did on Clark Avenue as I mentioned.

Another good one is East 22nd Street. I think the Campus District CDC led the way on that and it connects CSU to St. Vincent's Charity Hospital. They added bike lanes. They did some sidewalk work there too, I believe. Added brick patterned crosswalks. There are bus shelters. Down by St. Vincent there's even a landscaped median and some nice sidewalk landscaping. It's really a big upgrade. It's very nice. And it's a great location for it because you have the hospital serving a low-income population and also a big RTA bus hub there.

It’s tough to do a book tour during a pandemic, except on Zoom. However, it’s great to see that national outlets like Curbed and Fast Company are covering it, and Next City is doing a webinar. What kinds of advocacy are you doing around this issue? How can people get more involved?

Well, just sort of talking about it is the main kind of advocacy I'm doing right now. I'm trying to get people to rethink some of their assumptions about this, because a lot of them are problematic, I think, if you take time to think about it more. Another thing is that I launched a business, a consulting firm, it's called 3MPH and what I'd like to do with that is conduct "pedestrian safety audits." That means I would come out to a town that was concerned about this and just help lead a process where a group of people walk the roads, talk to other pedestrians, and try to assess what the safety shortcomings are there and develop a plan to improve it. Because of the gas tax hike in Ohio, before the pandemic, the Ohio Department of Transportation had said they were going to cover safety improvements undertaken by municipalities at 100 percent with no local match required. Now because of the pandemic the whole capital budget is up in the air but I'm still hoping I can "sell" some communities on taking an interest in this and trying to improve conditions.