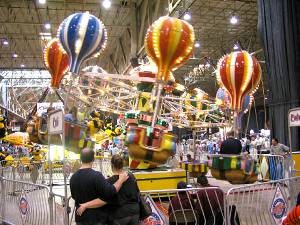 Cleveland's International Exposition (I-X) Center announced Wednesday that it would close at the end of the year after 35 years of operation due to Covid-19.

“The global pandemic has decimated the event industry as well as many other businesses and has ultimately led to this decision,” the I-X center wrote in a statement provided to the media. “The I-X Center would like to thank all its customers, employees, and attendees who helped make the I-X Center a success over the past 35 years.”

Known for its annual boat show, home and garden show, the I-X Center Piston Autorama and the iconic I-X Indoor Amusement Park, the massive event space, adjacent to Cleveland Hopkins International Airport, first opened in 1985. It has been convening Northeast Ohioans for conventions and events ever since. Among other things, President Donald Trump held rallies there in both 2016 and 2018. Cleveland owns the real estate after they ceded NASA Glenn to Brook Park in exchange for full ownership of the IX Center and more land for the airport.

The news comes only months after the IX Indoor Amusement park jingle was covered, in appropriately downbeat fashion, by a local band.

Though it opened as we currently know it 35 years ago, it was actually built and lived a former life before that.

From the Encyclopedia of Cleveland History:

The I-X CENTER, an exhibition building located at 6300 Riverside Dr. in BROOK PARK, was originally built in 1942 as the Cleveland Bomber Plant, but known through most of its history as the Cleveland Tank Plant. Owned by the War Department during WORLD WAR II, the facility was operated by General Motors as the Fisher Body Aircraft Plant No. 2 and made the B-29 bomber. In its heyday, the plant employed 15,000 workers, many of whom lived in housing projects built on Triskett and Berea roads and rode to work in a CTS bus dubbed the "Bomber Bus." When the war ended and the plant closed, the City of Cleveland decided against leasing the facility for future airport expansion at a bargain rate of $1 a year for fear it could not afford the maintenance costs. After a brief tenure as an exhibition hall and sales center, the plant was leased to Natl. Terminals for soybean storage.

By 1950, as the KOREAN WAR expanded, GM's Cadillac Div. selected the Bomber Plant as the manufacturing site for army tanks. The Cadillac Tank Plant, as it was renamed, promised immediate employment to 6,000. After closing in 1959, the plant reopened in 1960, when Cadillac was awarded contracts to build the self-propelled howitzers M-108 and M-109, and the M-114 Armored Personnel Carriers. In 1965 GM shifted management of the tank plant (now usually called the Cleveland Tank Plant or the Cleveland Ordnance Plant) to its Allison Div.

Among the products of the Cleveland Tank Plant operation was the controversial M-551 16-ton Sheridan tank, billed as the most versatile and mobile tank ever built. Congress decided to discontinue the program when the GM contract was completed in 1972. The Defense Dept. announced its intention to sell the plant. Brook Park, Cleveland, and GM expressed interest but dropped out of the bidding for various reasons. In 1977 the Park Corp. of Charleston, WV, bought the facility to create an international trade mart. That plan never fully materialized, but in 1985 Park opened the former tank plant as the I-X Center, billed as the largest single-building exhibition facility in the world. Adding to this in 1993, the Park Corp. opened 50,000 sq. ft. of space in the facility's basement to be used for mid-sized exhibitions.