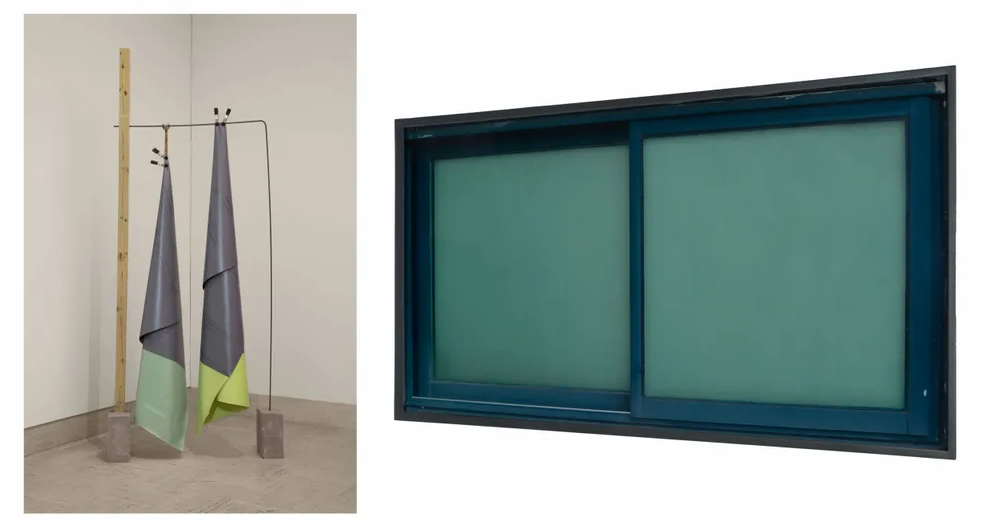 Abattoir Gallery, located in the Clark Fulton neighborhood, is bringing two exceptional artists together for one thought-provoking exhibition simply and aptly titled “Jason Murphy and Gwenn Thomas.” It opens this Friday, September 25th.

Abattoir continues to offer excellence in their curatorial work guided by the keen eyes of Lisa Kurzner and Rose Burlingham. The combination of Murphy and Thomas is sure to offer a transformative experience — Murphy with his intense reimagining of how objects are interpreted and deconstruction of their commonplace existence, using color as a compass to navigate the viewer, and Thomas with her subtle ‘photo objects,’ which distort our interpretation of reality and dimension.

I was able to interview both New York-based artists about the exhibition and the site-specific transformation of the gallery space. Murphy, who is originally from Detroit, finds himself right at home with the industrial backdrop of repurposed meat packaging plant of The Hildebrandt Building.

“Growing up in Detroit, I found myself in a world of post-industrial crumble and mute palettes,” Murphy explains. “This grew into a desire to create a taxonomy of colors hidden in plain sight amongst broken down and boarded-up buildings in the form of neon check cashing and dollar store signs. Together with a chromatic spectrum of landlord colors, this taxonomy, for me, describes the relationship between economics, material and form. My life has been shaped by Detroit’s allegiance to late-model American cars once shiny objects of consumer desire that are held together with red tail light tape, black garbage bags and multi-color bungee cords, yet somehow still drive.”

Murphy states that his work, “…examines the ongoing aftermath of late capitalism today, through a process of taxonomy that revolves around color and its relationship to our post-industrial urban landscape.” Murphy addresses capitalism with very specific categorizations of pigment and how they can permeate our psyche, seducing us using the science of color.

Studies have been conducted to determine what colors are most effective in advertising and have been applied to tantalize us into buying things or putting our trust into certain people. This manipulation is something Murphy is well aware of and he picks his colors very specifically to elicit a certain emotional response, like in his piece, “Superman II.”

This piece uses the color Oh Pistachio and Center Stage. Both are shades of green which can remind us of nature and have a refreshing and tranquil resonance. The two most striking objects, which appear to be two, large pieces of cloth hanging from a wood and rebar frame,  are a dark grey at the top with the green shades towards the bottom, clearly juxtaposing the hues making one’s eye go back and forth between the objects examining how these two colors differ, how they are alike and how this contrast makes us feel. Murphy, who says he is influenced by the work of Daniel Buren, shows how specific colors and their nuanced variances can impact us in ways we might not always consider.

A lot of thought is put into what political candidates wear when addressing certain people and certain issues. While a red tie can instigate a feeling of conviction and strength, a blue one can offer the viewer a sense of compassion and empathy. While we might not be preoccupied with this concept while being addressed, these colors leave an imprint on our emotions towards political figures and how we interpret their messaging. I asked Murphy: If 2020 was a color, what color would it be and why? He responded:

“2020 would be hypernormalisation red, hypernormalisation white and hypernormalisation blue. This is a nod to the 2016 documentary film by Adam Curtis which gets its inspiration from the Russian professor Alexei Yurchak and his 2006 book, “Everything Was Forever, Until It Was No More: The Last Soviet Generation.” Both the film and the book posit the idea that the world is becoming more and more complex as global politics, corporate power and technocracy continue to evolve yet we “the people” are continually presented with a version of the world that is more and more simplified. The idea is that everyone is in the know regarding the fact that everything we are being told isn’t true yet nobody has any idea of how to imagine a world that could be any different and when ideas of change are put forth we are stupefied by how to go about implementing the change.

Example of why we are in this predicament:

Here is an excerpt from a recent exchange between Donald Trump and Wade Crowfoot, California’s Natural Resource Secretary where:

Wade Crowfoot: “If we ignore that science and sort of put our head in the sand and think it’s all about vegetation management, we’re not going to succeed together protecting Californians.”

Wade Crowfoot: “I wish science agreed with you.”

While Murphy tests how our cerebral cortex is manipulated by color, Thomas’s work is somewhat ethereal and deals with objects, processes and how different lighting and environment can influence our interpretation.

“My work exists in a space between sculpture, painting, photography and architecture,” says Thomas. “ My object sculptures of awnings, windows, doorways and rooms — exterior and interior architectural spaces — initiate a back and forth between looking out and looking in. My most recent series of works are part urban landscape, part abstraction and part found object (objet trouvé).”

In her piece “Moments of Place II,” which is a C-print with an aluminum frame, she uses nuanced colors to capture mood and to help the viewer internalize what they are looking at from an objectification standpoint as well as the emotive response one interprets. While the photo-object at first appears to be simply a window frame, I feel the longer one interacts with it, the viewer begins to feel how the object, with its elegance of color and shade, becomes something three dimensional. The balance of form offer our spirt an intoxicating sense of harmony and simplicity.

The show will have two opening reception days: Thursday, September 24th and Friday, September 25th, 2020, but will then be open during gallery hours or by appointment through October 18th. For the duration of the COVID crisis there will only be 10 people allowed in the gallery at one time.

One may register to attend the exhibition here.