Laundry Machines at Daniel E. Morgan in Hough Will be Free for Students and Their Families 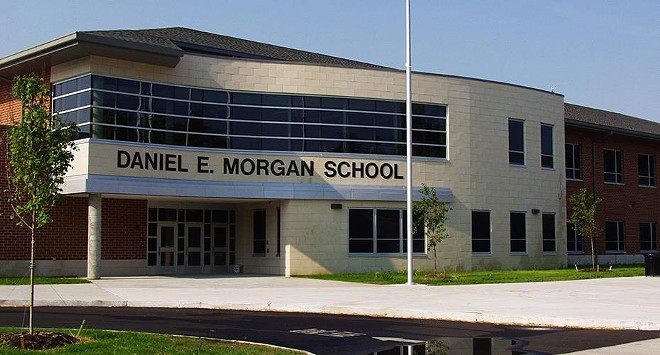 A washer and dryer will be dedicated at Daniel E. Morgan Elementary School in Cleveland's Hough neighborhood Tuesday evening and will be immediately available for use by students and their families.

Ward 7 Councilman Basheer Jones and the community development corporation Famicos Foundation have funded the appliances as a means to prevent absenteeism and promote confidence among students.

Nearly 20 percent of public school students don't have access to clean clothes on a daily basis, a hurdle that causes chronic absenteeism. Jones told Scene that this small step would have a significant impact for the community.

"I want people to feel change and to feel it immediately," he said. "There are things at City Hall that take time, but there are other things — small things — we can do in the ward to let people know we're fighting for them. There's enough bad news going around."

Jones said the Daniel E. Morgan laundry machines will be the second pair installed in Ward 7. Last year, machines were installed at Wilson School on Ansel Road, to rave reviews from families.

Use of the machines is free of charge. Detergent and dryer sheets are also being provided by Famicos. Jones said that it will be up to the school to determine how to schedule use of the machines.

In the private sector, similar initiatives are underway. Whirlpool, the Michigan-based appliance corporation, is installing machines at Breakthrough Schools' Citizens Academy Southeast this year as part of its expanded Care Counts program. Whirlpool installed machines at the Global Ambassadors Language Academy, a charter school on Cleveland's west side, last year.