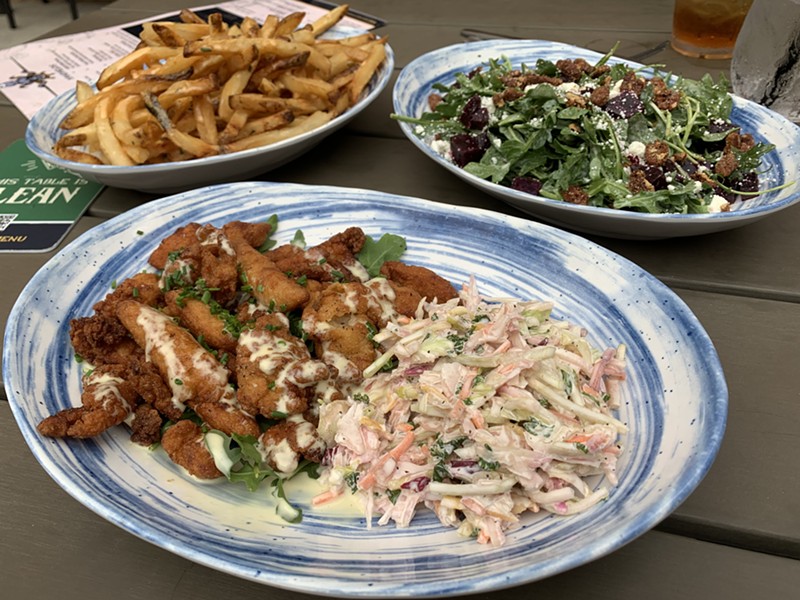 When Joseph Fredrickson announced his plans to open a restaurant in the former Hodge’s space downtown, his stated objective was to construct the inverse of Society Lounge, his craft cocktail bar on E. Fourth Street. Whereas the latter offers an experience that is upscale, meticulous and exclusive, Sixth City Sailor’s Club was designed from the jump to be approachable, affordable and built for speed. But more than anything, the mission was to squeeze every ounce of light and life from that spacious courtyard patio and alfresco bar, a prominent feature that the dark, cool, subterranean speakeasy lacks.

“We die in summertime,” Fredrickson admits of Society Lounge.

Lucky for Fredrickson, this season has been an endless string of near-perfect days and evenings. That smooth runway has provided Sixth City Sailor’s Club the chance to establish itself as the neighborhood’s new neighborhood bar, a novel alternative to dark dives, bland chains and spendy upmarket eateries. Shoehorned into the crook of adjacent buildings, this kitschy, jaunty, nautically themed oasis is the antidote to pandemic detachment syndrome.

The last cocktail I enjoyed at Society Lounge was a sleight-of-hand masterpiece that required an enigmatic glass chamber, plumes of aromatic wood smoke and the patience of a wildlife photographer. In contrast, my Negroni ($10) at Sixth City arrives in the time it takes to remove my facemask. The cocktail is one of a dozen different concoctions that are batched, bottled and ready-to-sling. This one arrives in a sealed cough syrup-style bottle alongside a rocks-filled lowball. Others, like the stout-infused Nitro Old Fashioned ($10) and coffee-scented Irish Bush-Wacker ($10) come in draft or slushie form, respectively.

For a concept described as “bar first and restaurant second,” Sixth City boasts a menu that is far better than it needs to be. Originally conceived by consulting chef Jeff Jarrett, and administered by current chef Dan Zuchinski, the captivating roster reads like a beachside table tent. Shrimp fritters, fried clams, clam chowder and lobster rolls will have diners reflexively reaching for bibs and lemon wedges. These aren’t freezer-burnt dough balls either; the fish nuggets ($7) are gently fried bundles of plump, moist walleye served with house tartar sauce and juicy grilled lemons. The ultimate finger food, fried clams ($8) arrive sunset-gold, drizzled with a light but fragrant roasted garlic aioli and paired with a mound of citrusy mixed-veg slaw.

Prices are low, portions are robust and flavors are dialed in. A mountain of crispy duck fat-fried potatoes ($6) come simply garnished with rosemary and Sriracha aioli or as an all-hands-on-deck poutine ($9) capped with braised short rib, cheese curds and savory gravy. Fickle pierogi fans can opt for a flight ($7) that combines a trio of dumplings stuffed with potato and cheddar, sweet potato, and jalapeno-spiked cheddar. Uniting them is a ribbon of chive sour cream.

A companion forced my hand with a “healthy” option: the bountiful arugula salad ($10), a winning toss of fresh greens, roasted beets, candied pecans and goat cheese. While far from innovative, the construction was texturally balanced and delicious, thanks in no small part to the creamy buttermilk dressing. I countered that move with an order of calamari ($9), a tentacle-filled platter of crispy satisfaction.

Shake Shack might be around the corner, but Sixth City’s smash burger might be the sleeper hit of the city. Dubbed the Captain’s Smash ($10), this tidy wax paper-wrapped stack features a brioche bun containing a slim patty capped with cheddar, bacon, egg, lettuce, tomato, onion and the Captain’s special sauce. (That bursting yolk, by the way, is murder on beards.) Feel like a double? What about a triple? How do you feel about avocado, lobster or Buffalo wing sauce? A build-your-own-burger section gives diners complete control over patties, cheese, toppings and sauces. 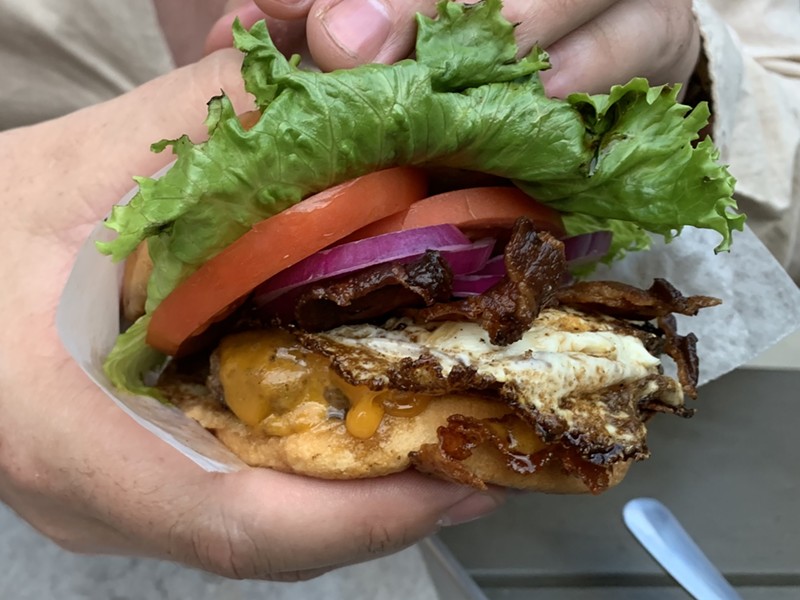 Sixth City blends that easygoing nautical theme with a distinctive Cleveland vibe to land on items like a classic Polish Boy, with kielbasa, sauce, fries and slaw, and the Fish and Chips, which consists of beer-battered walleye and fresh-cut fries. For beefeaters, there’s a Steak Frites starring grilled sirloin steak, duck fat-fried frites and foie gras butter.

If restaurant owners have learned anything over these past six months, it’s not to look too far into the future as all semblance of predictability is out the window. Fredrickson and the crew at SS Sixth City are focusing on today and tomorrow by keeping guests happily distracted with restorative cocktails, appealing snacks, sandwiches and entrees and engrossing diversions like pool, bocce and fire pits. They will attempt to keep the fun rolling well into fall with clambakes, heated enclosures and fun themed events, because nobody seems to know what the next port of call will bring.