Libertarian Jo Jorgensen Has Never Smoked Pot, But She'll Still Defend Your Right To Do It In Her Long-Shot Bid for President 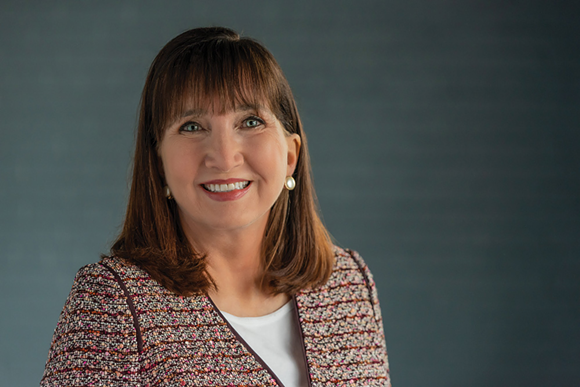 In the Libertarian Party, presidential candidates don’t pick their running mates; instead, they’re chosen by delegates at the nominating convention in a separate vote. This year’s presidential ticket resulted in the odd-couple pairing of Dr. Jo Jorgensen, an academic from South Carolina, and Jeremy “Spike” Cohen, a podcaster prankster who promises “a Waffle House on every corner” and to fund time travel research to kill baby Adolf Hitler.

“All I can say is that I was the one who was nominated for president,” Jorgensen says, diplomatically, when asked about her running mate’s more out-there ideas. “And so I’m not campaigning on any of those things. I do have a different platform, and so that’s the one that I’m pushing.” Our sister paper the Metro Times caught up with her before a campaign stop in Detroit.

That platform is that “government is too big, too bossy, too nosy, and too intrusive,” Jorgensen says. “And the worst part is they usually end up hurting the very people they try to help.”

In a political system where Democrats and Republicans dominate, third-party candidates like Jorgensen, who made a campaign stop in Detroit recently, have their work cut out for them — and especially this year, with the coronavirus pandemic, civil unrest in the streets, and the all-consuming contest between President Donald Trump and Democrat Joe Biden, which has been cast as no less than a battle between authoritarianism and democracy, the top issues of the day. Earlier this year, U.S. Rep. Justin Amash of Grand Rapids briefly considered seeking the Libertarian Party nomination after defecting from the Republican Party and becoming the lone Libertarian in Congress, but backed out after just three weeks, citing the “extraordinary challenges” of 2020.

“The path of course is very difficult, but I still say somebody has to run,” Jorgensen says. “We have to get the word out there. And so many people are realizing that the two parties just aren’t working.”

Four years ago, the Libertarian Party ran a high-profile ticket featuring two former Republican governors, Gary Johnson of New Mexico and William Weld of Massachusetts. It wound up being the Libertarian Party’s most successful presidential run to date, earning nearly 4.5 million votes nationally. (For perspective, Trump and Clinton received more than 60 million votes each, while the Green Party’s Jill Stein earned just 1.4 million votes.) The Libertarians did so well in Michigan in 2016 that the party qualified to hold a primary in the 2018 governor’s race — the first time that a third party did so in almost 50 years.

The margin between Trump and Clinton was just some 10,000 votes in Michigan, meaning that third-party voters got plenty of blame for helping Trump win. Even Bill Gelineau — who helped campaign for Johnson in 2016 and won Michigan’s Libertarian Party gubernatorial nomination in 2018, where he came in a distant third — told us earlier this year that he was going to put his party aside and vote for Biden in November. “It’s not because I don’t believe in the party — I worked my ass off for people in the Libertarian Party — but the fact that Michigan is going to be a critical state,” he says. “I believe that Trump is a clear and present danger.” (Amash, meanwhile, has endorsed Jorgensen.)

Still, Jorgensen thinks there’s an appetite for a third choice this year, claiming that most of her campaign’s volunteers have come from outside the party. Trump, she says, appealed to many because he was an outsider who promised to cut spending, balance the budget, and bring our troops home. “And he did none of that,” she says. “And so what I would like to say is that for all the people who wanted a true outsider, I’m that outsider. I think people do deserve a choice, and right now they don’t have much of a choice between Trump and Biden.”

Of course, plenty of Biden supporters will say there is a clear choice, and point to Trump’s move to fill the Supreme Court seat vacated by the late Ruth Bader Ginsburg as proof that liberal third-party voters should have just pinched their noses and voted for Clinton; even if you don’t love a particular candidate, you have to look at the four-dimensional chessboard. But Jorgensen believes the Democratic Party deserves to be critiqued.

“The Democratic Party that I grew up learning about in the ’60s was against the war, and they were for free speech, and they basically thought that people should be making their own decisions,” she says. “And that's not the party of today. The party today is very pro-war. And of course they don't believe in free speech.” Jorgensen says she wants to “turn America into one giant Switzerland, armed and neutral.”

She also points to the Democratic Party’s slow, reluctant acceptance of gay marriage as an example of a lack of leadership and principles; they accepted it only once the popular culture did. “Both Hillary Clinton and Barack Obama said that gay marriage should be illegal,” she says. “I don't for a minute think that they agreed with that, but they're just going after the votes. They're not standing up for what's right.” Another issue that she thinks that the Libertarian Party has long been ahead of both major parties is the right to use marijuana — neither Trump nor Biden have come out strong in support of cannabis, despite the fact that the majority of states have legalized it, and most voters support it. (Green Party candidate Howie Hawkins also supports legalizing weed.)

So has Jorgensen ever smoked pot — and did she inhale?

That gets a laugh out of the self-described “goody-two-shoes.” (“The nice thing about me running for president is I have no dirt,” she says.) “I somehow managed to get through high school and college in the 1970s without ever having tried marijuana,” she says, adding that she got a graduate certificate in drug and addiction studies. “What I do is I tell people that my drug of choice is bourbon, which is actually more dangerous than marijuana. I tell people that the only way marijuana kills you is if a bale of it falls on your head. However, I think that we should be able to be free to use whatever drugs we choose. And so I choose to use the more dangerous drug of bourbon.”

Nevertheless, Jorgensen says she would remove marijuana from the federal list of controlled substances on her first day in office.

“I've had a lot of people say, ‘Well, I don't use drugs, so I don't care about the drug issue,’” she says. The problems associated with drugs — violence, crime — “aren’t drug problems; those are prohibition problems,” she says, adding that cannabis is a safer alternative for pain relief than the opiates to which so many Americans have become addicted.

We admit, it almost feels silly to be asking about pot in the middle of a pandemic that has completely upended life around the world. But Jorgensen believes there is a Libertarian solution to the pandemic, as well: She says Trump could have used his emergency powers to streamline the FDA and approve more COVID-19 tests; then, the U.S. could have avoided much of the long economic shutdowns by implementing a large government-run mass testing program, as other countries have done.

Regarding the Black Lives Matter protests against police brutality, Jorgensen agrees that the problem is institutionalized racism, a problem made worse by the federal government militarizing police departments with weapons and tanks. “Instead of having the kind of community with the beat cop who knows everybody's name, now instead what you have is kind of an us-versus-them mentality,” she says.

“If you look at, for instance, Rosa Parks, the heroic Black woman who refused to sit on the back of the bus, a lot of people don't realize that was a government-run, government-owned bus,” Jorgensen says. “And 60% of the bus ridership at the time were Blacks. What if Uber were to discriminate against 60% of their customers? They would go out of business, as well they should. But the government doesn't go out of business — the government can discriminate without any accountability, just like with Jim Crow laws, just like with redlining, So we’ve got the government who has basically set up this broken system.”

Despite the Libertarians’ gains in 2016, we’re not sure 2020 is the year to make the case for a smaller government and a free market, with the push for reopening the economy making the U.S. the top coronavirus hotspot in the entire world. So we have to ask: Knowing that the Libertarian Party faces a long shot, does Jorgensen have a preference as to who will win — Trump or Biden?