Savage Love: I'm Trying to Be Friends With My Ex and It's Making Me Miserable 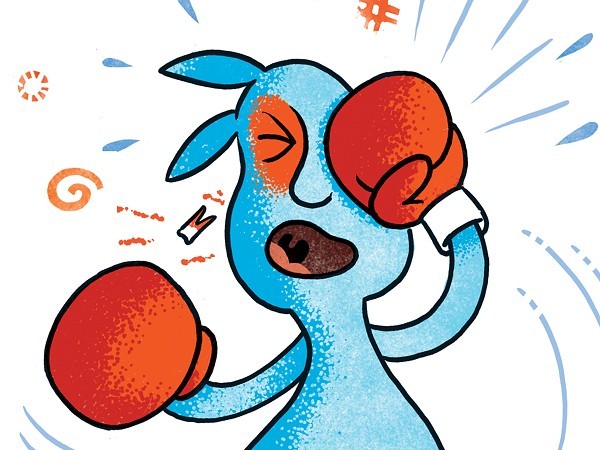 I was dumped in August by a guy I was seeing for 10 months. He told me that he wants to work on himself and "needs to be selfish" right now. Since then, we have spoken every day, shared numerous dinners, and gone on hikes. Our friendship is killing me. With him I hold it together. Away from him I cry all the time. I've started seeing a therapist, and I'm on medication. I'm trying to be mature about the breakup and match his level of "coolness," but it's destroying me. My friends tell me that I should stay away from him, allow some time to pass, and reassess. But the thought of losing him is almost as bad as the thought of keeping him in my life.

P.S. I should also mention that I ended a 10-year relationship for the opportunity to date him.

"Hey, Dan, what I'm doing is making me miserable — should I stop?"

Yes, SHATTERED, you should stop. Your friends are giving you excellent advice: Stay away from this guy for at least a year — don't talk on the phone (with him), don't share meals (with him), don't go on hikes (with him) — and then see how you feel after you've talked, shared meals, and gone on hikes with other people. It's always nice when exes are friends, but it's not an easy pivot and it can't be executed instantly. And transition to friendship is always much harder for the person who was dumped — because of course it is — and it's even harder when a selfish dumper accepts or demands the kind of attention and emotional support from the dumpee that the dumper is no longer entitled to.

My name is a variation on "John Smith." I met a woman and she liked me, but then she did a cheapo background check on me and found a "John Smith" who had committed felonies — including assaulting a high school principal — and ended things with me. I am not that "John Smith," and I am innocent of these crimes! She had every reason to trust me: We met at my house, and she viewed the premises without incident. What do I do?

You had this woman over to yours, NTG, and she viewed the premises without incident. OK ... so you didn't rape or kill her when she dropped in, and that speaks well absolute bare fucking minimum of your character. But it doesn't obligate her to keep seeing you. If you can prove you're not John Smith, High School Principal Assaulter, and she doesn't care, NTG, then there's some other reason she doesn't want to see you again. (Was there a MAGA hat on the premises?) But whatever her real reason is/real reasons are, you've been given a "no." And like everyone else, NTG, you have to take "no" for an answer, even when it feels unfair or arbitrary.

I've been with my boyfriend for almost five years, and everything is amazing except that he sees his ex-girlfriend when I'm not around. He says she wants to meet me, but he never wants to meet up with her when I'm with him. Their "dates" are becoming more frequent. She's a single mom and he has expressed to me that he wants to be in her son's life. My feelings of discomfort are escalating, and I'm having trouble believing him when he says he wants me to meet her. When I bring this up, he gets angry and says I'm being too emotional. Am I being a crazy jealous girlfriend? I need some help. I want to be a better person. Should I reach out to his ex-girlfriend directly since my boyfriend refuses to make it happen? Or do I bail on the relationship? I feel that uncomfortable.

—Ex-Girlfriend Looms Over Everything

I'm in my early 30's, and I've been struggling to make new friends. A lot of the people in my extended social circle are polyamorous/queer, and while I identify as queer, I'm in a monogamish relationship that isn't poly. Lately I've been finding that I've been getting approached a lot by people who want a romantic/sexual connection. It seems like the only people who want me around lately want in my pants, and they assume that because I'm queer I'm also poly without asking directly. So people ask me if I want to "hang out," and I'm often unsure if they mean "hang out" in a date context or a friend context. I've ended up on dates I didn't know I was going on! My biggest issue is that I don't understand why people want to date/fuck me but don't want to be my friend. I'm pretty average looking, and I'm not overly flirty. So why is this happening?

—Noodling On This Problem Over Lattes, Yeah?

There's nothing stopping you from asking — asking directly — for a little clarity: "Hang out? I'd love to! But do you mean 'hang out' as in 'spend time together as friends' or 'hang out' as in 'let's-go-on-a-date'? I ask because I've wound up on a couple of dates that I didn't know were dates, and it was awkward." As for why this is happening ... well, either the poly people in your social circle assume — incorrectly — that all queer people are poly, or you're much more attractive than you're giving yourself credit for, NOTPOLY, or some combo of both.

I'm a gay man who, due to extensive BDSM play, has developed very prominent nipples. They're always erect and very visible through my clothing unless I wear outrageous patterns or tape them down. Yes, I'm somewhat embarrassed by them. I don't have gynecomastia (moobs), just really, really, really noticeable nipples. While they are a definite boon between the sheets, they're a bane on the streets because I'm very self-conscious about them. Do people notice this sort of thing on men? Is their reaction negative? Am I being ridiculed behind my back? Mind you, folks universally treat me with kindness and respect, probably because that's how I approach everyone else, but a little voice in my head keeps telling me there's this shameful part of my body that's being made fun of by everyone. Well, everyone except the guys who helped get me to this point. Your thoughts?

Only a small percentage of the people you meet will notice your nipples, TITS, and the thought processes for 99.9% of the people who do will go something like this: "Big nips. Eh, whatever." The noticers will immediately file this useless-to-them information about your tits away and never give it/them another thought. (Unless you're Andrew Cuomo.) I think you're self-conscious about your tits because you know why they're so prominent: extensive and, I assume, highly enjoyable BDSM play, TITS, and you worry that other people — straight people, vanilla people, judgy gays — will take one look and realize you're kinky motherfucker. But most people won't make that leap, and the ones who do are either kinky themselves or, if not, they aren't going to dwell on your tits or hold them against you. Stop kink-shaming yourself. You earned those tits — you suffered for them — and you should be proud of them!